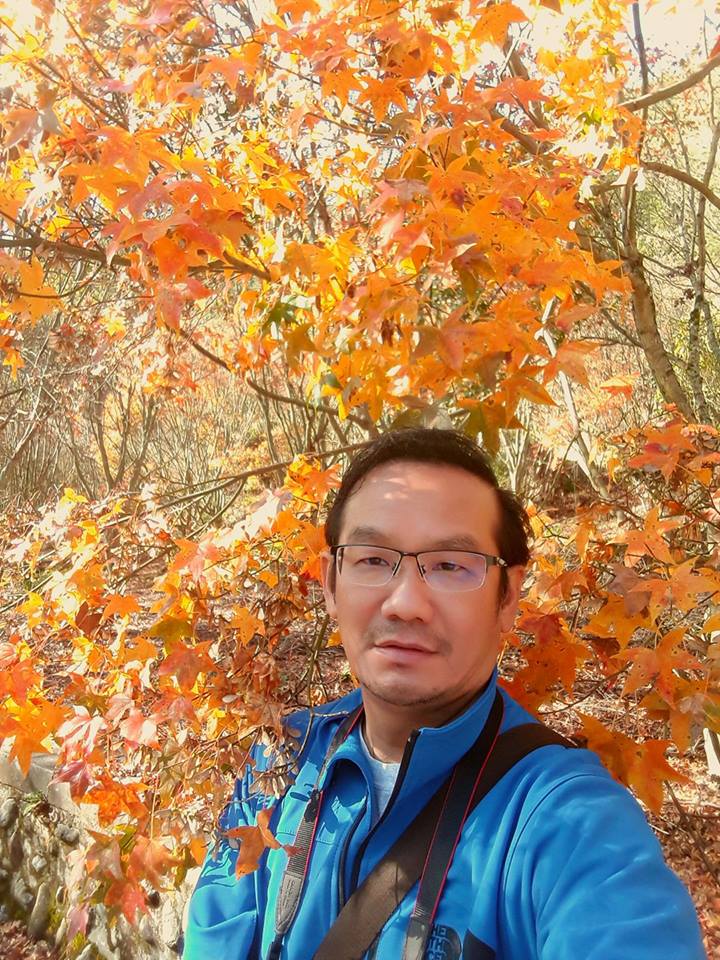 Geographically, Wuling Farm 武陵农场 lies in Taizhong County. In reality, it’s quite a distance from the city of Taizhong itself.

The name “wuling” means military hill. This hilly region was originally established in 1963 to provide farmland for retired soldiers to keep themselves occupied and productive. Under the leadership of the first director, army veterans cultivated the land, growing summer highland vegetables and planting temperate fruit trees.

Since 1989, however, the farm started to gradually develop facilities, such as camping grounds, floral gardens, tea houses, hostels and a tourist service centre. After completion, the farm worked together with the Veterans Farm Committee in obtaining subsidies from the Tourism Bureau in order to expand its facilities over the years.

As from 1999, however, farming started taking a backseat and tourism took over as the main source of income and employment for the “farm”. The original area was greatly expanded. All amenities were renovated and upgraded, including the gardens and hotels. The maple trees here turn autumn into a stunningly romantic season. During the coldest months, it would often snow, triggering massive traffic jams caused by “pilgrims” from the sub-tropical lowlands.

It’s obvious to any visitor that Wuling today is no longer a simple farm. Apart from camping grounds, it now has two relatively upmarket resorts welcoming well-heeled tourists. One of them (Hoya) even have luxury suites with a spa and restaurant. There are good trails to Taoshan and Xueshan 3886m base camp. There is even an endangered freshwater salmon eco centre. 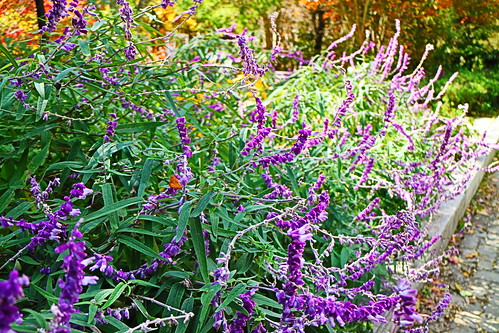 From here, the road got even more tortuous than the one from Taroko Gorge. To facilitate repairs and maintenance, parts of the road were open only at certain hours. There was a point where we had to wait for nearly half an hour. I got out of the taxi to explore. Trees draped in cloaks of golden or scarlet leaves were everywhere, a sharp contrast with the greenery on the other side of Dayuling. 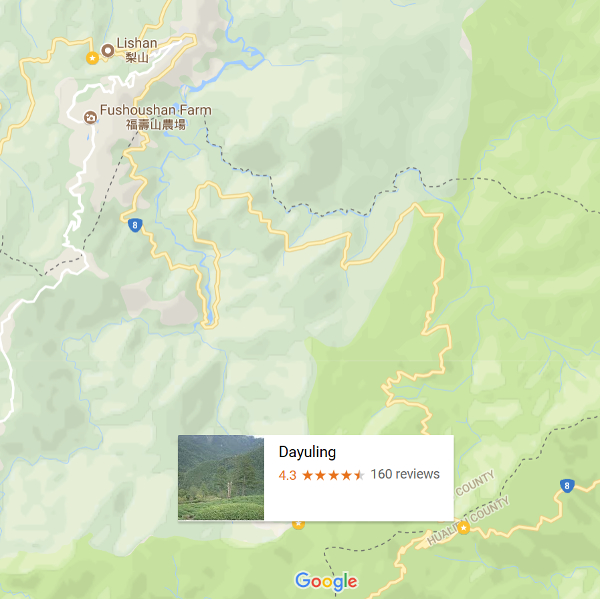 We entered a most unyielding realm. With a less determined people, the road would have been a jeep track and not one which even an ordinary taxi could drive on so smoothly. But Nature does not submit easily to man’s attempts to invade her privacy. Efforts to hold back landslides seemed only temporarily effective. My Huang told me that the work can never be completed. Every typhoon or earthquake would undo some of the work done in the previous season. Such roads are a testimony to the tenacity and survival instinct of the Taiwanese people.

We arrived in Lishan a little dazed from the swaying and jolting ride. This place reminded me of the mountains in Chiangrai, Thailand. The numerous pear plantations here gave Lishan 梨山 its name. Besides pears, persimmons, peaches, apples, oranges and tea are also grown here. We had some really good Western food for lunch; cooked with great pride and served with a smile – not cheaper, better, faster – Singapore’s mantra. At the bustling fruit market with Xueshan in the background, I only managed to grab a box of green tea leaves. 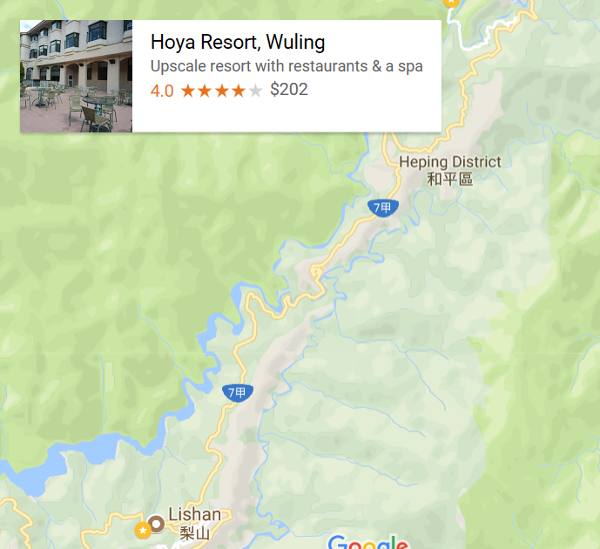 Wuling was a further one hour’s drive away, but this stretch of the road was a bit more welcoming. Not as wild as the first stretch from Dayuling, the entire mountain was overgrown with fruit trees. We soon arrived at the entrance to Wuling Farm. The attendant demanded all kinds of payment. We had to pay for each person entering the park including Mr Huang. We even had to pay for the taxi entering the park.

Mr Huang protested. He told the attendant that he was only our driver sending us inside and would be out the moment he had dropped us off at our hotel. The attendant stood her ground and insisted on counting Mr Huang as a visitor and his taxi as a visitor’s vehicle. I offered to pay, but Mr Huang refused to let me pay.

“Don’t give in to people like that.” he insisted. 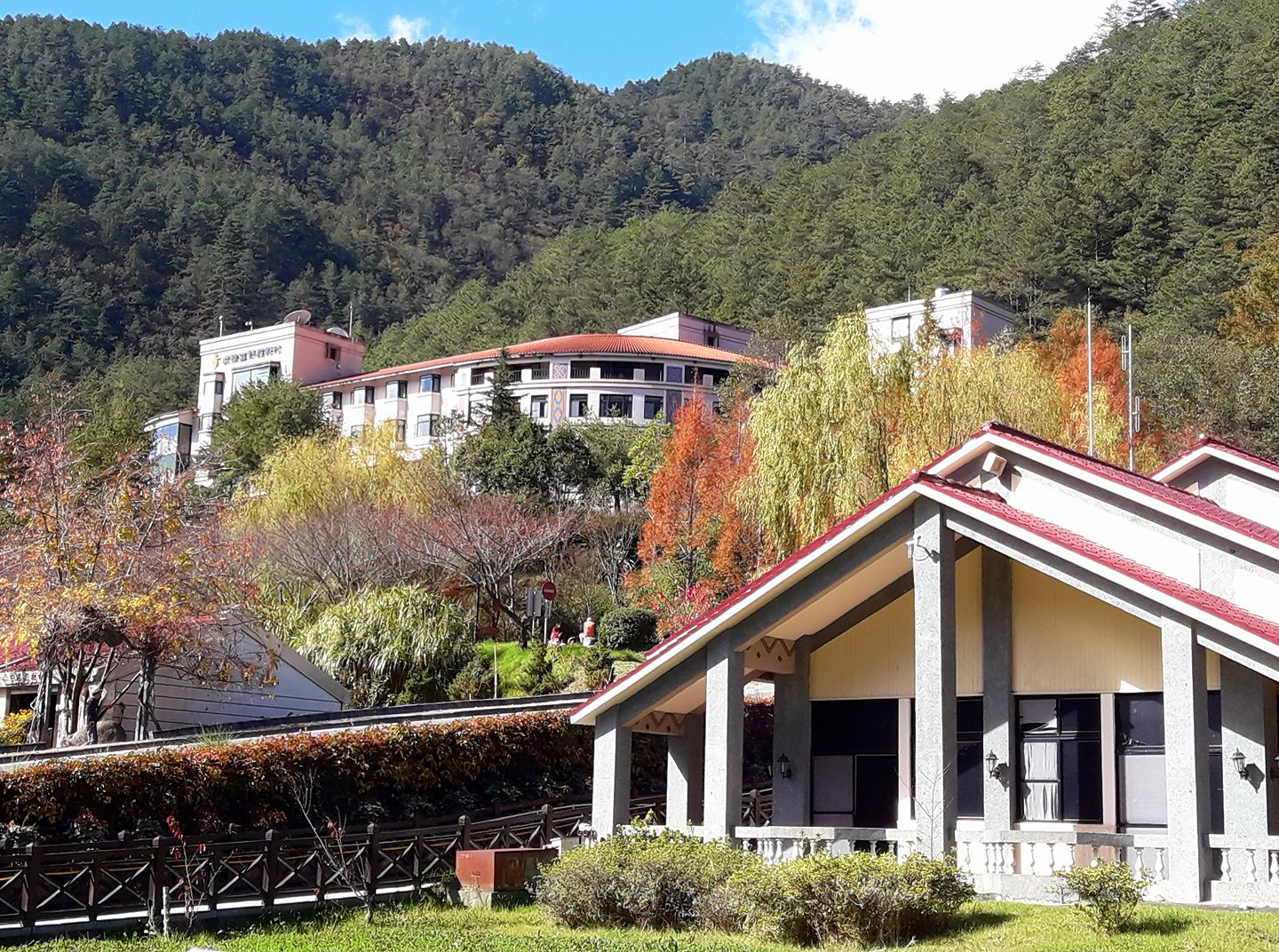 We ended up not paying for Mr Huang. For that, we had to get down from the taxi and walk 1km to our hotel. There were cheaper accommodations, but they were all fully booked by the time I decided to stay in Wuling. Happily, it wasn’t a rip-off. The room was spacious and cosy. We were given coupons for breakfast and dinner (included) as well as a free visit to the spa for every day that we stayed. The room rate was rather pricey, but you can’t really argue with the standard of service. 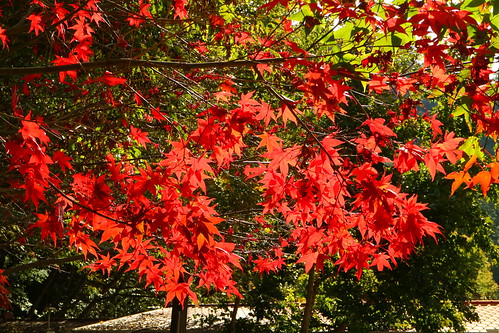 Autum has descended on Wuling Farm on this trip of ours. The colour of blood orange, the maple leaves, even more beautiful than flowers, ruled over this landscape. It finally dawned on me where the inspiration for some Chinese pop songs of the 1970s came from.
Liu Jia Chang, the most well-known Taiwanese songwriter of the 1970s with his very own 秋诗篇篇 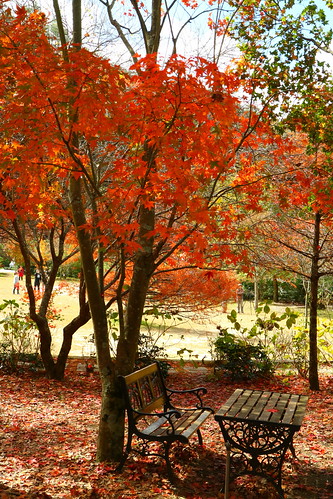 The late Feng Fei Fei and one of her most well-known songs, 枫叶情

There were many pleasant paths for walking within the park. and the air was filled with the fragrance of osmanthus. 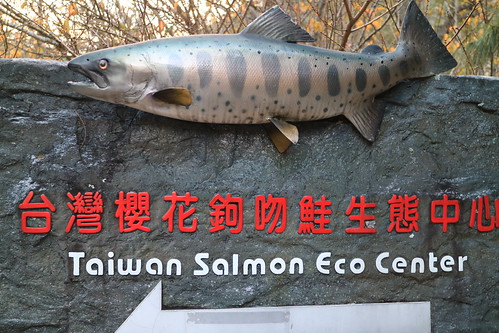 I was excited to see the world’s only freshwater salmon. Apparently, this particular colony of salmon was trapped in a freshwater environment due to earth movements and got cut off from the sea forever. Even though this fish is such a rarity and curiosity, there was really nothing much to see at the 鲑鱼台. The salmon being bred and kept here are tiny and somewhat unimpressive. I doubt they would be in any danger of being turned into sashimi. 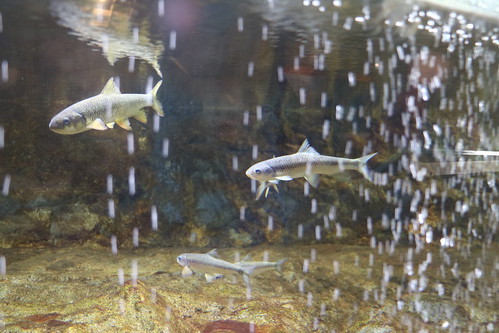 One of the things that will get me back to Wuling is not leaves or the snow but the mountain, Xueshan. It is the second highest mountain in Taiwan after Yushan and I would love to climb it some day. Though Xueshan is written 雪山 in Chinese, it does not mean “snow mountain”. Xueshan refers to the striations of this mountain in the local aboriginal language. 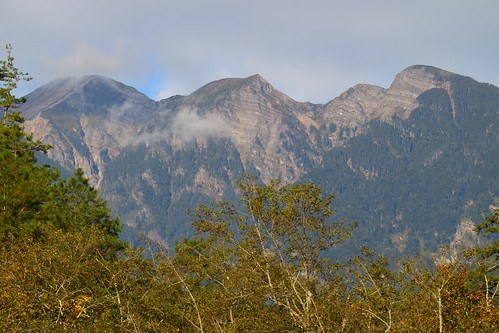 My elder son had a bad case of gastroenteritis on the second day. He vomited almost non-stop and was getting weaker due to dehydration and lack of sleep. I informed the reception and they immediately got a member of their staff who was on leave to drive us to the clinic at Lishan for treatment.

We were driven back to Lishan where we had lunch the previous day. It was an incredible, heartwarming experience and I really can’t thank the staff at the clinic enough. The total bill was so small that it would be an embarrassment to claim from our travel insurance.

After my son had his treatment, the hotel staff who was supposed to be on leave drove us back to the hotel. Thankfully, it was a different attendant at the entrance. He greeted the driver who explained that he was sending us to the clinic at Lishan. Instantly, the barrier was lifted and we entered the park without paying. If only we had this guy the previous day.

Back at the hotel, I thanked everyone involved repeatedly. The hotel manager apologised profusely even though it may not have been his fault. My son had gorged himself with salad the night before. The hotel offered to pay for any follow up treatment, but by dinner time that day, he was already quite well. Taking ownership of the guests’ problems and going out of the way to fix the situation without denying responsibility may not be the best strategy to squeeze money out of others and protect yourself, but it certainly earns you a lot of kindness points.

After 3 days in Wuling, we took a public bus down to Yilan. There’s another reason for going back to Wuling besides Xueshan – the warmth and hospitality of the people.