Fooling Around With Annapurna 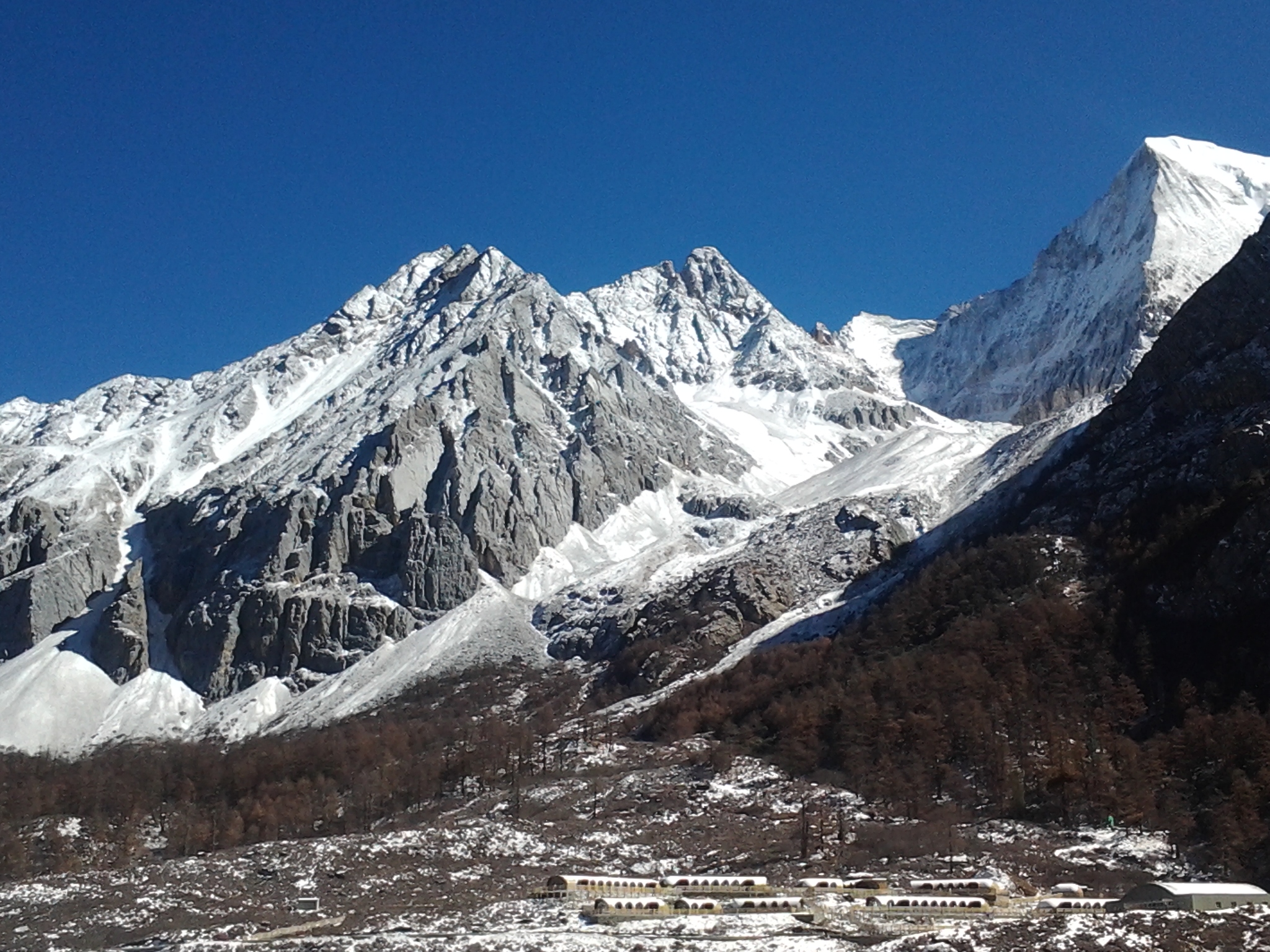 My friend Janet shared an article on trekking in Nepal on Facebook. Published by Channel New Asia, its catchy title was “Trekking the Himalayas on a whim – alone and with no plan”. After a casual glance, my first reaction was “a reckless and foolhardy woman”, but upon closer inspection, several interesting loopholes appeared in the story.

The trip report was authored by journalist Ainslee Asokan, a complete newbie to trekking in the Himalayas and she shows us how she defied the odds by successfully trekking to Annapurna Base Camp without any planning or preparation. Legality aside, that’s a bit like bragging that you’ve gulped down a bottle of Chivas Regal, drove at full speed from one end of the CTE to the other without incident and survived to tell the tale. To a veteran like me, the author’s lack of respect for the mountains is as worrying as it is annoying. 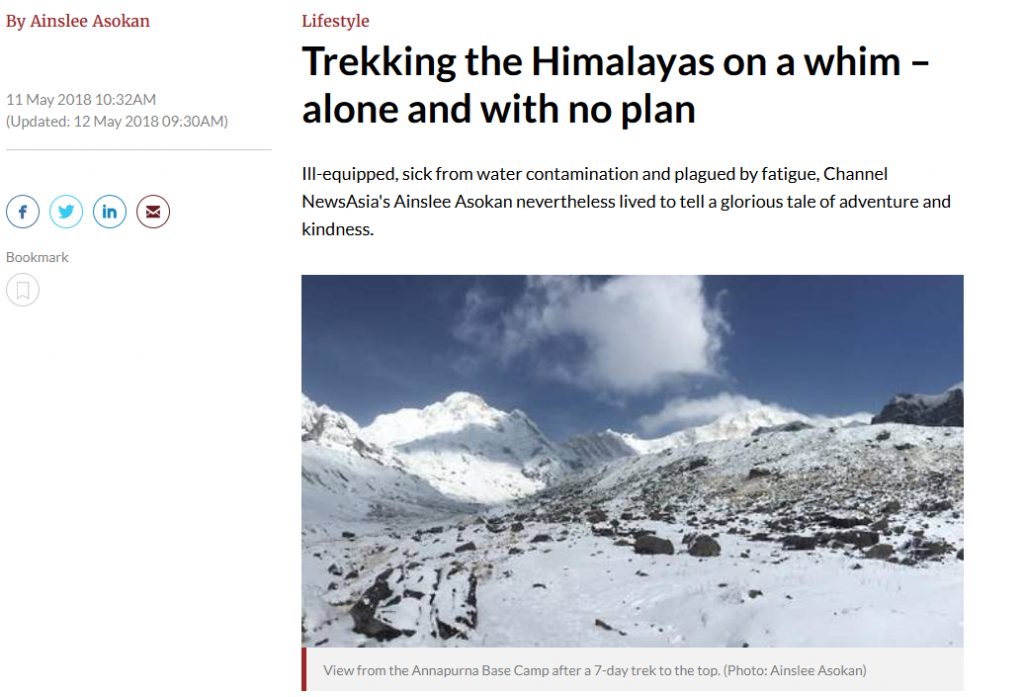 And CNA had the gall to call it a “glorious tale”. All right, let’s see how glorious the tale is, starting from the beginning. The first incident on Ms Ainslee’s unplanned holiday, is not having enough money to pay for her visa on arrival. She so casually wrote that:

I suppose when you decide to travel without any advance planning, it is easy to overlook the fact that you haven’t brought enough Singapore dollars with you to pay for something as crucial as a visa.

I knew I wanted to take a vacation, but the idea of planning one seemed cumbersome – and that’s how I found myself standing in the middle of Kathmandu’s airport with my passport, a backpack, a duffel bag and no idea what to do.

The obvious alternative for people who find planning for a vacation themselves cumbersome is to join a tour. Ms Ainslee’s solution was to turn up in Kathmandu with a backpack and duffel bag but no idea what to do. I know of people who arrive in Kathmandu practically empty-handed, but they went on to do some shopping, sightseeing and doing a mountain flight is the closest they get to the Himalayas. I also know of people who arrive in Kathmandu without even a backpack or duffel bag, but they plan to go trekking and stock up on everything in Kathmandu. So what’s in Ms Ainslee’s backpack and duffel bag if she really had no idea what to do? The following statement also sounds fake.

By 7pm on the first night, I had failed to find local Nepalese food around my hostel situated near the tourist hot spot of Thamel, as the streets were lined with European-style cafes that sold questionably soft croissants.

Of course, there is a whole variety of international cuisine in Kathmandu these days. There’s Chinese, Japanese, Korean, Middle Eastern, Thai and even Turkish. But Ms Ainslee’s claim that she failed to find any local Nepalese food in Thamel simply cannot be true. She just had to walk around a bit. Once outside the poshness of Thamel, momo shops are almost ubiquitous.

Full disclosure: Trekking had always been a faint possibility with this trip, so had packed a down jacket and altitude sickness pills. I had not, however, trained for any of it.

So she did consider the “faint possibility” of trekking – hence the down jacket and whatever else was in her backpack and duffel bag, but she didn’t actually train for it. This brings into question the author’s integrity. No plans at all, but down jacket and altitude sickness pills in the backpack. Then on impulse again, less than two hours later (presumably before 9.00pm on the first night?) she booked a trek to Annapurna Base Camp. Why not some other trek? There are numerous easy treks for “unprepared” tourists in Nepal. It might take a day or two to pick one. Why did she choose Annapurna Base Camp when less than two hours before that, her itinerary was a blank sheet of paper?

What’s a self-deprecating trip report without some incidents? Just a couple of days into the trek, Ms Ainslee was already struggling with stomach problems after allegedly drinking contaminated water from a lemon cordial drink – which in my experience, is always served hot. She pushed on and at one point, was so close to collapsing that she had to barge into a stranger’s hut to rest. Her struggles were obviously exaggerated and most revealing is the following statement.

But I listened to a piece of sound advice given by a friend before my trip: Listen to your body and go at your own pace.

So she actually sought tips and advice on trekking from a friend before she went on her totally unplanned trip? She even had an “array of medication” (her own words) to help her cope with her altitude and stomach problems. The fact that she did the trek in the standard 7 days like most well-prepared people shows that she must have been exaggerating the problems she faced or bragging that she can do it in spite of being so “disadvantaged”. I notice that she had one gloved hand in the photo taken at the ABC signpost. Where did that come from if she was so unprepared? She ended with some advice, hoping that rookies won’t make the same mistakes. This, I find rather disingenuous as there is already a ton of advice from far better qualified veteran trekkers out there. The final statement that

“The longer trek to Everest Base Camp, on the other hand, while seemingly daunting because of the word “Everest” in it, is a gradual uphill ascent.”

The above statement, from someone who has not done Everest BC (can you believe it!) is distasteful and totally misleading. This trek is way tougher than ABC. You can find Ms Ainslee’s article here, but I suggest that you don’t waste your time unless you want to look for more embarrassing inconsistencies.

There are many reports on maiden treks in the Himalayas which are far more truthful, interesting and informative. Ms Ainslee’s title and claims were probably just meant to bait the reader. Shame on CNA for publishing such lame and misleading material.