Kunming, Dali With A Kid In Tow 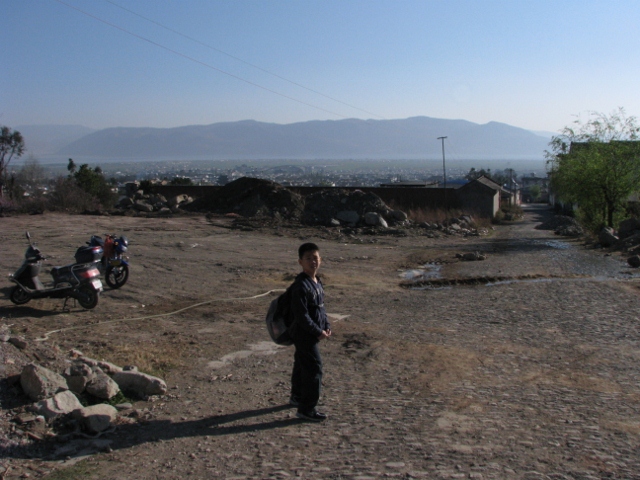 A 3.5-hour flight on Silkair MI912 brought us from hot, humid Singapore to dry and hazy Kunming. As our fellow passengers got picked up by their tour guides or checked into their 5-star hotels in Kunming, we took a taxi to Majiexi bus station 马街西客运站. The next bus to Dali was leaving in 10 mins. It was a private 高快 bus – a luxury which only Yunnanese who are better off can afford. No time for lunch. We hopped on the bus just as it was about to depart. It was a sleek and shiny new machine which could have been more comfortable if the passenger in front did not insist that the curtain shared by us belonged only to her.

Only partially shielded from the sun as the passenger in front asserted her full entitlement to the curtain, I could only sympathise with the countries opening their doors to apparently wealthy and well-educated people who must be reminded to be 文明. It was a smooth, comfortable ride on the highway. The little one soon fell asleep, so there were no complaints of hunger. About 2 hours later, we got up for a toilet break at Chuxiong 楚雄. I bought some tea eggs and kept the gastric juices busy for a while.

Almost 4 hours later, the sight of giant windmills spinning on hilltops came into view. We were approaching Xiaguan, the wind city. Most buses would stop at this windy city. Not being sandwiched between a mountain and a lake, Xiaguan lends itself much better to commercialisation and development. We alighted and took a short but very expensive taxi ride to the ancient city of Dali. The sun was already setting behind the Cangshan mountains when we arrived. 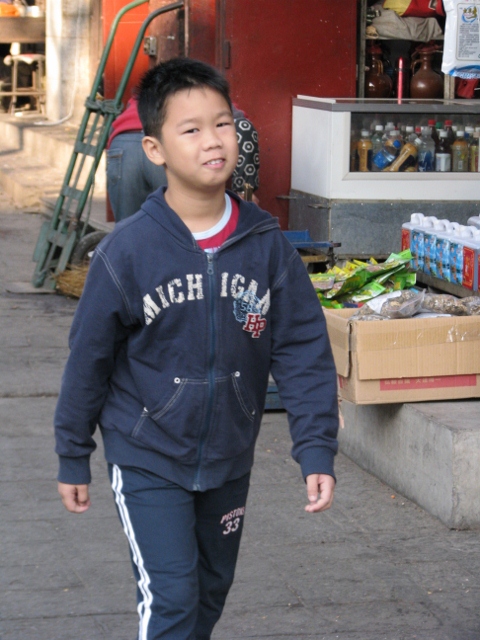 The little one took all this back to back travelling pretty well – surprisingly.

We walked on the cobblestone streets towards the Four Seasons Youth Hostel 春夏秋冬青年旅社. I’d booked a room here online. Many people not familiar with backpacking (and hence take a derisive view of it) would think that “youth hostels” or backpackers’ lodges are little more than cheaper than cheap motels.

Actually, these establishments are often much better managed and equipped than most cheap hotels. The Four Seasons provide double rooms and dormitory style accommodation. The layout and architecture obviously came from the inspiration of someone who refuses to behave. There’s a koi pond with a wooden embankment on one side. There are deck chairs on the embankment. I guess you can sit here and write your next great novel. 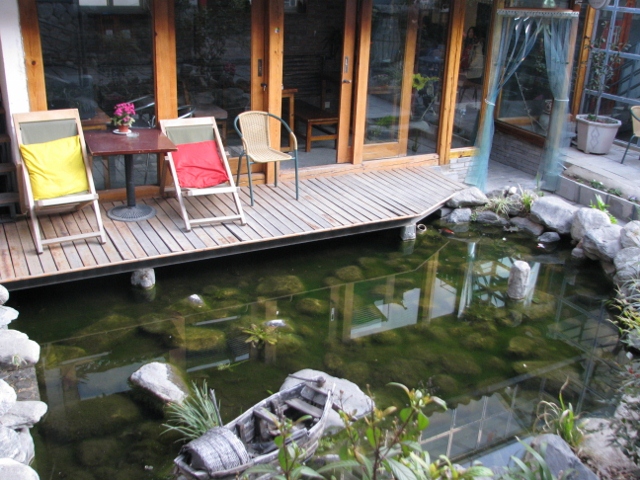 In front of our room, there was a table soccer machine as well as a billiards table. The house rules say: No playing before 8.30am or after 11.00pm. No policing required. Backpackers may refuse to follow rules set by the establishment, but they are generally considerate people – much more so than their intellectual equals who play golf and drive fast cars. Believe it or not, you are more likely to find your Ah Bengs and Ah Sengs at 5-star hotels than here. The guests at these hostels are young people or overaged hippies.

Many of these hostels also keep a library filled with paperbacks and old editions of the Lonely Planet abandoned by guests who have earned enough to buy the latest editions. Sometimes, you’ll even find journals left behind by Somerset Maugham wannabes. Reading their journals not only inspired me to write my own, it further reinforced my determination to travel only in this meaningful, idyllic and romantic way.

The little one was happily confused by his surroundings. He knew this was not a hotel. He called it our “home”, albeit a temporary one. Yes, this youth hostel has a homely feel to it. I suddenly realised that lunch was long overdue. In fact, it was time for dinner. We had fried chicken and local mushrooms. Particularly delicious is one species called Jizong gu/jun 鸡枞菇/菌 – the king of mushrooms. Jizong mushrooms used to be wild, but recently, it has been successfully cultivated.

The eateries at Dali have been totally transformed. In the past, most were simple noodle shops. Today, they are the equivalent of our zer cha stalls. On neat tiers outside the shop, the edible botanicals are attractively displayed. The mushrooms, the greens and the flowers all look so exotic that those not into jungle cuisine will find them more botanical than edible. Next to the botanicals are buckets of live fish from Erhai. The carp are cheap, but gong yu 弓鱼, which doesn’t taste like a freshwater fish at all, costs more than double the price of carp.

The main street at Dali is now a shopper’s street. Fast food outlets, jewellery shops, designer wear and tea shops erased much of the city’s ancient flavour. But many side streets and alleys in the ancient city still refuse to surrender to modernisation. The little one came too late and had missed out on the rustic charm of a backpacker’s hideout which Dali was decades ago, but he didn’t miss everything. He was so fascinated with the handmade mantou 馒头 and xiang bing 香饼.

The next day saw us at the foot of Cangshan. The little one was eager to see snow, but the chair lifts were operational only up to 2500m. I estimated the snowline to be at least 2800m. The Cangshan relay station at about 3200m was clearly sitting on snow. If I were alone, I would have climbed up. 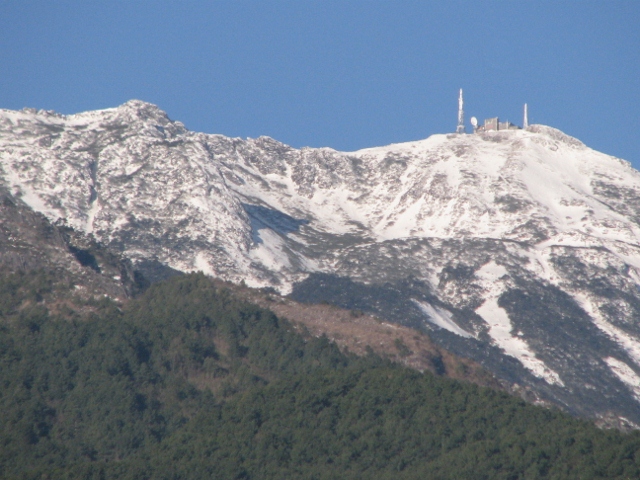 Disappointed, we turned back towards our room at the Four Seasons and dumped our snow gear. We then headed off to Caicun harbour 才村码头 on public bus No. 2. It was a 20min ride to the shore of Erhai, a freshwater “sea” with its own islands.

Gone are the days when you could hire a wooden fishing boat and go wherever you wanted. I remember sitting at a table on the deck of a wooden fishing boat, sipping tea, admiring the scenery and dreaming I was Li Bai. Or when a junk sailed past. I could imagine myself flying over like some fictional swordsman from Jin Yong’s imagination. Nowadays, only official boats are allowed to take tourists and they have fixed routes and destinations. It’s one up on safety, but the romance of being adrift on Erhai, watching the moon set behind Cangshan while sipping puer tea offered by the kind boatman can only be imagined.

The new official boats are much faster than the old boats. We soon arrived at Jinsuo Island. Some locals simply call it hai dao or “island in the sea”. I remember having lunch here in 1995. The fish was live and prices were very reasonable. Fearing that the little one may not survive another day without lunch, I decided to have lunch here. The fish turned out to be more expensive than those sold at Dali! How the simple folks at Jinsuo Island have changed. Luckily, the little one enjoyed the meal. Expensive it was, but the fish was marvellous and the little one learned how to use chopsticks.

We had a short last morning at Dali. Youtiao and soya milk for breakfast, bought some mantou and explored a few alleys we had not walked through. Our bus to Kunming was departing at 11.30am. We packed up and checked out of the Four Seasons. For being such nice guests, the staff there gave the little one an orange drink. Me? I had a complimentary gourmet coffee.

It was a warm afternoon. The bus made a stop at Chuxiong as expected. What was not so expected was the toilet stop that the driver chose to make. At this particular stop, we had to walk through a maze in a departmental store to get back on the bus after using the toilet! Nothing on display looked safe to eat. Nothing seemed worth buying either. We went without lunch.

The bus pulled into Kunming in the early evening. There is only one place to stay – the Camellia Hotel. I could have chosen a youth hostel like the one at Dali, but I decided to give the little one a different feel. The Y240 doubles here would rival any deluxe room in a 5-star hotel in Singapore. Kunming is of course a lot more upmarket and “designer” than Dali. The subway was under construction and the happy boss at the Camellia was expecting a station right in front of his hotel.

For dinner, I took the little one to the Ma Ma Fu Restaurant just around the street corner. We both had fried rice. Mine was fried in XO sauce, but what would really hit your taste buds would be the tiny strands of dried chilli. They looked like saffron, but they burn.

After a hot and happy dip in the bathtub, the little one slept like a log. The next morning saw us taking public bus No. 52 to Daguan Lou 大观楼. This is a theme park on the shore of the Dian Chi 滇池, a massive lake that can be mistaken for a sea. In fact, Kunming’s cool summers and mild winters are all attributed to the moderating influence of Dian Chi. Even the seagulls seem unable to tell that Dian Chi is not a sea. You’ll see lots of them flying around. Food for the seagulls is readily available.

The little one had a great time feeding the seagulls. We then had a ride on a paddle boat followed by a wet-and-wild roller coaster ride. After a Sentosa like morning at Daguan, we were off to Huguo Road for lunch and shopping. There were great offers at 361o and Li Ning sportswear. Then, we were off to Carrefour to buy a big travelling bag to pack our latest acquisitions. Carrefour was selling nicely stitched notebooks for S$1 and 6 gel pens with refills were also going at S$1. Then it’s seaweed, puer tea 普洱 and vacuum packed 豆腐干.

Clubbing is not for the little one, so we went to bed early. I let him sleep till 9.00am as we weren’t going anywhere the next morning. Our flight departed at about 2.00pm that morning – a one hour delay due to runway congestion at Kunming Airport. The little one was glad to be home and still in time for his Taekwondo class after dinner, but already, he was asking when we could visit China again.

I’ve failed miserably in sharing my passion for meaningful travel 12 years ago. I’m glad that I’ve succeeded with my little one this time.