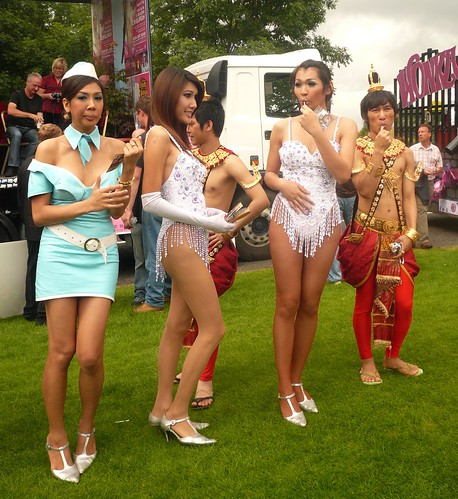 New PC Air on Thursday took officials and journalists on its maiden flight out of Bangkok under the ministrations of four third sex flight attendants.

The privately-owned Thai airline’s management prides itself on its equal-opportunity employment policy for transsexuals.

It invited about 100 Civil Aviation officials and journalists on its inaugural flight from Bangkok to Surat Thani, 530 kilometres south, and back again.

“Today, we are ready to embark on the new journey and we would like to introduce our four transsexual angels,” PC Air president Peter Can told the passengers before take off.

The airline, founded in 2010, made a media splash last year when it encouraged third sex candidates to apply for flight attendant positions.

PC Air is to specialize in charter flights.

“Today is our proving flight with our well-trained cabin crew who has passed all the requirements by Department of Civil Aviation,” Chan said. “PC Air assures you of safety and we are ready to serve all our passengers.”

Thailand has a relatively high rate and social acceptance of male-to-female transsexuals, but rights campaigners have pointed to discrimination and intolerance from institutions and employers.

Will it take off? Well, some said, only in amazing Thailand. Some say they are not so keen to join the Mile High Club anymore. But some Americans and Europeans readily admit that they would rather have a beautiful and smiling (and sexy) ladyboy serving them than some rude old granny. What do you think? I certainly hope the boys will be safe from their groping hands.