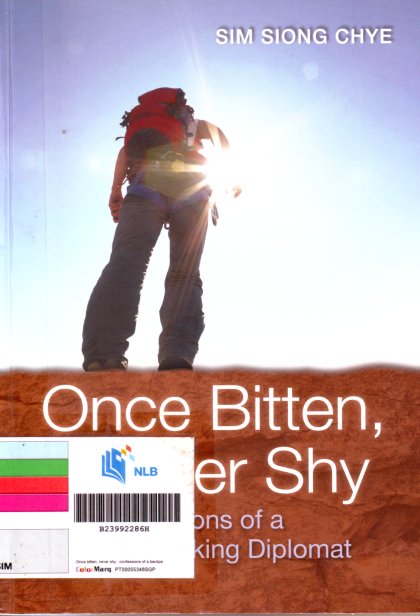 I was rather excited when I saw this book at the library. Sim Siong Chye does not sound like a familiar name and the cover photo seems to promise some interesting adventure stories. I was disappointed. Sim is a diplomat working for the Foreign Ministry. His “adventure” begins with a posting to Beijing, China. He arrived there on his 27th birthday. Sim then takes us on a ride around the neighbourhood, sharing a lot of mundane observations at his residence and his workplace. He even talks about his “romance” with a “typical northern Chinese beauty” by the name of Zhong Sheng. Sim claims that getting romantically involved is not his priority. Along comes a DJ called Li Gang and he manages to win Zhong Sheng over. They got married and our hero is left all alone. But did he even try to start a relationship but got thwarted by cultural issues? That would have made some semblance of a story. So is there a story here? I’m not sure why Sim had bothered to mention it.

The chapter on Russia is equally dry. He merely tells us about a ride on a train from Moscow to St Petersburg, talking to an old lady about her domestic issues, falling asleep on the train and getting shaken up by a fierce policeman. Then, he meets a tout at St Petersburg and contemplates the cloistered and organised life he has in Singapore.

Then it’s losing his luggage in Cairo, getting pissed off with all the baksheesh, getting even with a guesthouse operator who refused to offer left luggage service … in Turkey, he meets the tormented wife of an abusive “Big Bear” and offers to help her send a letter … he visits all the usual tourist spots and without fail, gives us more “researched” information than personal observations. This is especially true of the chapter on Europe. I’m not sure how authentic his “backpacking” experience is when he often has people meeting him at the airport and having hotels booked in advance.

His companion Yeng Hua seems to get along very well with him. I’m surprised that so little is written about their interactions. Perhaps the most adventurous thing that Sim did was to tango on the streets with a street performer at Buenos Aires. He visits other countries in the South American continent including the Galapagos Islands. The destinations are exotic and unusual, but then again, the is no gripping “insider’s” story here either. Until the “grand finale” of the book.

Sim loses his wallet and he tries very hard to make a police report in Argentina. He writes about how kind the local policemen are in going beyond the call of duty to take his statement. He is even more surprised to receive an email from a stranger who has found his wallet. She asks for his address in Singapore. Subsequently, he receives his wallet in a parcel sent from Argentina. The sender refuses any payment for the postage. Finally, I managed to find a story in the book.

There is no doubt that Sim has good diction and knowledge, but writing a travel book requires skills which are probably not known to the Foreign Ministry. I am not impressed by this skimming-the-surface effort. Research is important, but to make travel writing interesting, he should delve a bit deeper into the typical sights and sounds that any regular tourist would experience.