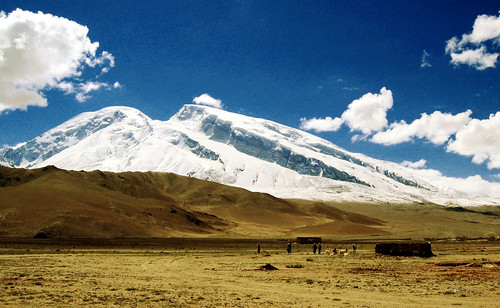 Muztagh Ata 慕士塔格峰 stands at 7546m in the Pamir Highlands. The first ascent of the peak was in 1956 by a large party of Chinese and Russian climbers, via the west ridge, which is now the standard route.

Since the first ascent, many ascents of Muztagh Ata have been made. In 1980, a party led by Ned Gillette made a ski ascent/descent of the standard route, the first ski ascent of a mountain over 7,500 m (24,600 ft). An ascent of the much harder south-east ridge was made in 2000, and a secondary route at the west side of the mountain was first climbed in the summer of 2005. Swedish Anneli Wester camped on the summit in 2011 after climbing the mountain solo and in alpine style.