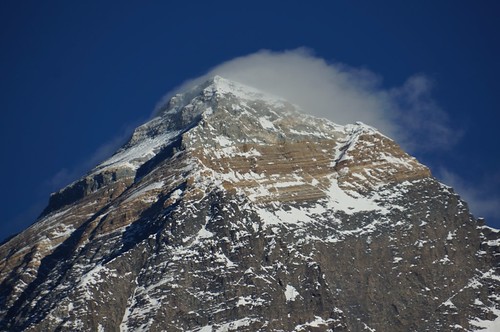 KATHMANDU: A near-record number of climbers reached the summit of Everest as the season ended on Saturday without a repeat of last week’s deadly accidents, which had raised fears of overcrowding on the world’s highest peak.

Around 150 people reached the top of the 8,848-metre (29,029-foot) mountain at the end of the spring weather window – a week after four deaths led to calls for better safety measures to end ‘traffic jams’ near the summit. “A handful of climbers returned from camp four after being unable to move up. But the weather was good over the past two days and many took advantage. About 150 made it to the top today,” said tourism ministry official Tilak Pandey.

“There are still a few Sherpas and other climbers who will try to reach the top for a couple of days. But the official season has ended and the climbers are now returning to the base camp.” A 48-hour stretch of good weather saw more than 250 climbers reach the top of the world, despite warnings of potentially deadly bottlenecks in the ‘death zone’ above 8,000 metres.

Among those who achieved the feat was Wasfia Nazreen, 29, who is climbing the highest peak on each of the continents to celebrate 40 years of Bangladeshi independence. “We got our independence but we women are still fighting for freedom,” she was quoted as saying from the summit on the expedition’s Facebook page. “This is to the women of Bangladesh, who (risk) their lives every day for freedom, peace and equality.”

Another who reached the summit was Prakash Dahal, whose father Puspa Kamal Dahal led the bloody 10-year Maoist insurgency in Nepal and is now a key player in mainstream politics. Four climbers from Germany, South Korea, China and Canada died while descending from the crowded summit area last weekend, which saw 150 people reach the summit before a severe windstorm set in.

Experts say the sheer numbers of climbers exacerbates the already substantial dangers of tackling Everest, which has now claimed more than 220 lives — half of those in the past 20 years. Mountain guide and climate activist Dawa Steven Sherpa said inexperienced climbers and those attempting records such as being the first from their country to conquer Everest were making the mountain more dangerous.

“Last year, I turned back at 8,500 metres and gave up my attempt to reach the top when I was stuck in a traffic jam for hours,” 28-year-old Sherpa, who has scaled the mountain twice, said. “At base camp, I found out the reason for the jam was that a holy man wanted to meditate on the top for 36 hours.

“That meant that his two Sherpas had to carry an exceptional number of oxygen cylinders, slowing them down and causing traffic. Standing still in minus 30C above 8,000m can invite hypothermia and frostbite.” The record number of ascents in one day is 169 on May 23, 2010, according to German statistician Eberhard Jurgalski, who compiles data for the 8000ers.com website and has been chronicling Everest activity since 1981. afp

I’m not sure whether I should feel amused, but the holy man who wished to meditate on Everest should really be more mindful of other climbers’ safety.