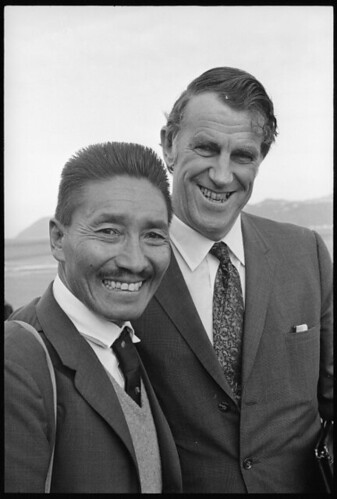 Who was mountaineering legend Tenzing Norgay’s best friend? No, it’s not Edmund Hillary. In fact, Tenzing hardly had any contact with Hillary until the climb actually started in 1953. He also had few unofficial meetings with Hillary after their climb. To Tenzing, Hillary was merely a climbing partner with whom he shared a historical moment.

When Nepal first opened its doors in 1950, the race for Everest via the Southeast ridge started. The British tried to obtain a permit and thought they would get it. They were rejected. For some reason, the Swiss were successful in their application. The Swiss applied for 2 climbing seasons in 1952. Both were approved. This must have infuriated the British but the stage was set for the Swiss to take a first shot at the roof of the world.

Known for his superhuman strength and his ability to motivate Sherpas and get things organised, Tenzing was sought out by the Swiss. Having no colonial history, the Swiss treated the Sherpas as equals. Tenzing and his men were delighted to work with the Swiss. When introduced to Raymond Lambert, the two men hit it off immediately.

The spring 1952 Swiss expedition employed 170 Sherpas who marched in from Kathmandu. Tenzing felt like a member of the climbing team. He worked very closely with Lambert. Even though the Swiss had lost all his toes in a previous climb, he was a strong climber. He was the first to suggest that Tenzing might have three lungs. When 2 Sherpas abandoned their loads at the Lhotse face, Tenzing continued climbing with double loads! After 2 members of the expedition retreated at 27,500 ft, the expedition was left with Tenzing and Lambert. The two friends reached an altitude of 28,250 ft, the highest record at that time when strong winds and extreme cold made them reconsider their decision to go for the summit. They retreated, knowing that reaching the summit was possible but death would be certain.

The Swiss returned to Everest in autumn 1952, but that expedition was plagued with delays and accidents. One Sherpa was killed by falling rocks. A member of the Swiss team had to be rescued. Tenzing felt very dejected. He also fell very ill after the expedition and the Swiss rushed him to the best hospital in India. The next Swiss expedition was to be in 1954. Meanwhile, the British were all set and ready to go in the spring of 1953. Of course, Tenzing was invited. His family was dead against it for he had barely recovered from his illness. But Tenzing was a very special Sherpa. Unlike his colleagues, he had ambition and a burning desire to climb. All it took was Lambert’s blessings and Tenzing was off to Everest again.

The British organised their mountaineering expedition as they would a military campaign. They employed 350 Sherpas, more than twice the number the Swiss employed. With colonialism still on their minds, the British treated the Sherpas like servants. It was a very different experience from that the Sherpas had with the Swiss.

On the Khumbu Icefall, Edmund Hillary slipped and fell into a crevasse. Fortunately, he was roped to Tenzing who skillfully belayed him and allowed him to climb back up. Expedition leader John Hunt decided that the two would make an excellent team for the summit bid.

Blessed with good weather on 29th May 1953, the pair departed from their bivouac above the South Col and reached the South Summit at 9am. With a clear blue sky and light winds, they became the first men to stand on the highest point on the planet at 11.30am.

The two men congratulated each other. Tenzing was elated, but deep down, he wished that it was Lambert who was standing next to him on the summit. If only the weather could be better in 1952. 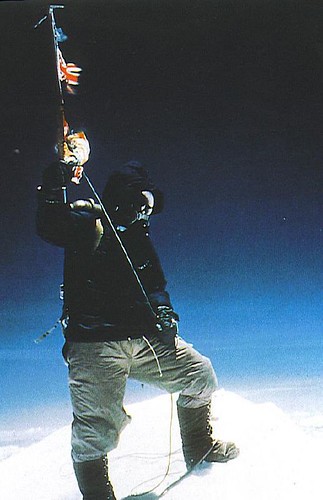