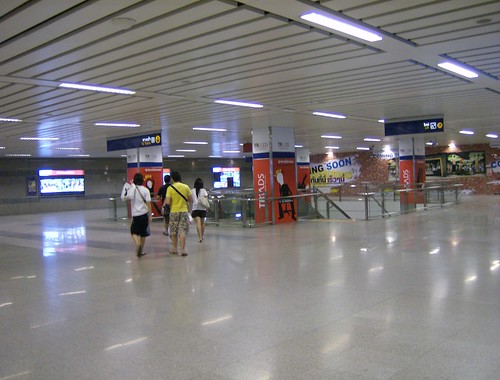 BANGKOK, Aug 21 – Mass Rapid Transit Authority of Thailand (MRTA) Governor Yongsit Rojsrikul said the government’s policy to collect a Bt20 fee for travel all routes of the capital’s underground and elevated electric mass transit trains will be in effect within two years.

The timing is set within two years because the number of commuters will quickly increase due to the lowered fare, and in that case the number of trains should be sufficient to demand.

BMCL currently has 19 trains operating. It needs at least double that number to serve future demand once the Bt20 fee is effected, Mr Yongsit said.

He noted MRTA will continue rail line expansion in the capital. Blue and purple lines, now under construction, were delayed by last year’s flood crisis. The Cabinet will be asked to consider an extension of another 180 days for construction responsible by the private sector, due to the resultant delays.

With a budget of some Bt500 billion, the MRTA governor said, management and construction is covered for up to seven years.

Once completed, Bangkok will have an electric train network of more than 200 kilometers like other big cities.

MRTA will manage the system and related services for further investment without depending only on government funding. (MCOT online news