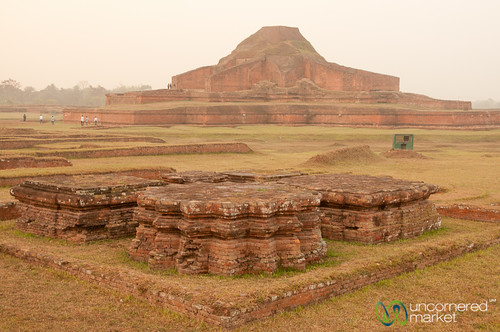 Somapura Mahavihara is a Buddhist monument located at Paharpur, Bangladesh. It was designated a UNESCO World Heritage Site in 1985. More than just a temple, Somapura Mahavihara was a Buddhist training centre known even in Tibet. Following the style more similar to Burmese and Javanese than Indian, the site houses the architectural remains of a vast Buddhist monastery, Somapura Mahavihara, covering 27 acres (110,000 m2). It was an important intellectual centre for Dharmic Traditions such as Buddhists (Buddha Dharma), Jains (Jaina Dharma) and Hindus (Sanatana Dharma) alike. The 21 acre (85,000 m²) complex has 177 cells, viharas, numerous stupas, temples and a number of other ancillary buildings. The outside walls with ornamental terracotta plaques still display the influence of these three religions.

This model shows what the structure could have looked like in its heydays.