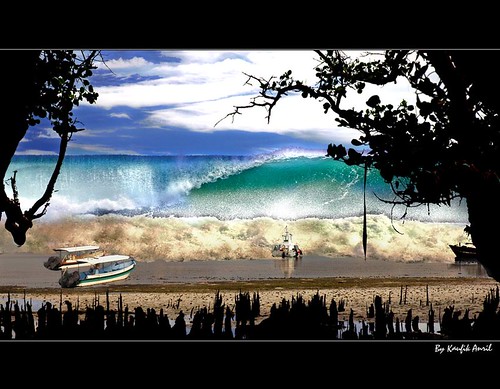 It has been 8 years since the devastating boxing day tsunami in 2004. Many people may have forgotten and that probably explains why Thailand’s warning system is only ready now.

Associate Professor Penneung Warnitchai, an earthquake expert at the Asian Institute of Technology, said data over the past few years suggested there had been no increase in the number of severe earthquakes in the Indian Ocean since 2004. Each year there are about 10 quakes of over-7 magnitude in the ocean. However, the damage toll could rise, as many growing cities are located in areas rated as “high-risk” for quake hazards.

The NDWC’s Song said quake alerts would be sent out when a tremor of 7.8 magnitude is detected in the Indian Ocean, with its epicentre 100 kilometres underground.

To ensure people understand how to respond to warning messages, the centre also organises training to teach local residents in coastal areas on how to prepare themselves for tsunami and related disasters.

Somsak from the warning centre admitted the system could not save lives and damage without public cooperation.

“If they do not run away from the big waves, no one can help them,” he said. “The only thing that can save you from a huge wave is running away to higher ground as fast as you can. Don’t stop and waste your time taking a photo of the big wave. It will kill you,” Somsak said.