Officially, dangdut is a genre of Indonesian popular music that is partly derived from Hindustani or Hindi music, Malay, Arabic. Dangdut is a very popular genre because of its melodious instrumental usage and vocals by the singers and musicians, and Indonesians really enjoy Dangdut together while dancing in the Ghoomar style. Dangdut really has a powerful feeling to enjoyment because of its tabla and gendang beat, which insists Dangdut listeners to dance to it. Dangdut has very similar melody, vocal, and instruments to Indian Hindustani Music, because of its influence from India and Sanskrit. 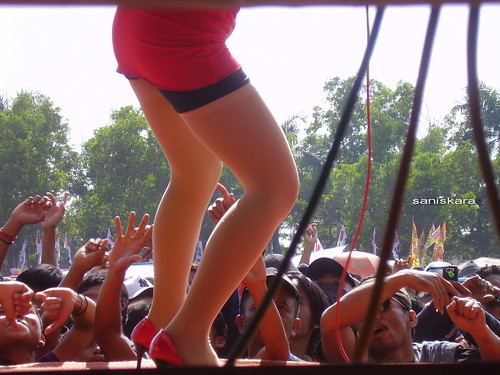 And unofficially, Dangdut is an outlet for conservative Indonesians to escape from the grasp of their traditional values; an opportunity to see provocatively dressed women performing some of the most crude and titillating stunts on stage while they sing to ancient Indian-influenced music. Indeed, a visit to Indonesia would not be complete without a visit to a dangdut performance to see the underbelly of this complex society. Simplistic proponents of the “Asian Way” should really take a good look at these public performances in a predominantly Muslim country. The naive and uninitiated may wonder if this is really Indonesia.

Like the swimming costume singers in Thailand, many dangdut singers can’t sing to save their lives. They thrive on revealing posses, gyrations and sexy costumes. And the crowds love it. A mosque could be nearby and nobody complains. As we talk about embracing the “right” values, we should perhaps be aware that our very conservative and traditional neighbours may not be there yet.

As we embrace the “right values”, we should also be aware of what goes on in the real world. As we show respect for others’ “sensitivities” based on official information, our neighbours’ dangdut dancers are competing with one another by licking microphones and showing more flesh.