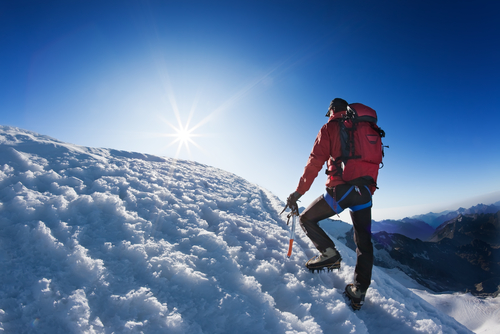 Mark Horrell writes a very readable account of his successful climb of Mt Everest in 2012. Their teams starts off in Kathmandu and makes the overland journey to Tibet to climb the mountain from the north. From the start, the reader may be misled into thinking that this is some parody of sorts. Horrell is funny and is able to derive humour out of every unpleasant situation in the mountains. However, he soon gets serious with his day to day, blow by blow account of the events. Still, I can’t help wondering how much beer their team actually brought to Base Camp.

Horrell goes in great detail describing their long and tedious acclimatisation climbs. To his credit, he does so without boring the reader. When the narrow window is found and the team gets ready for the summit push, Horrell seems to forget how to be funny and details his difficult and dangerous struggle up the North Col, First Step, Second Step, Summit Ridge etc.

The action doesn’t end there. Unlike most books in this genre that merely skims over the descent, Horrells recounts the many dangerous moments he had while trying to get off the mountain alive, under the watchful eye of his personal Sherpa Changba who has climbed the mountain 12 times.

There are quite a number of dead bodies the author encountered on his climb. The one that bugs him most is an irrational climber he ran into on his descent. Horrell dedicates this him. Ridden with guilt, he wonders if that climber could have survived if he had advised him to turn around.

Overall, it is a highly readable book. However, I skipped chunks at the end as the author described how totally drained and humourless he was when he reached Base Camp.