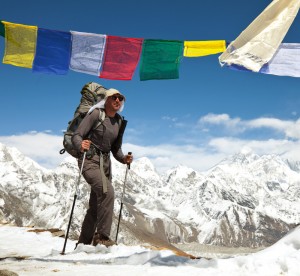 I don’t know about you, but when I visited Nepal for the first time, I didn’t need any persuasion to get myself a guide. Even long after I was comfortable with teahouse trekking on my own, I continued to engage the services of Nepalese friends I’ve gotten to know over the years. The advantages of engaging a guide are many.

I know no. 7 doesn’t sound like an advantage and helping the local economy is the furthest thing on some tourists’ minds, but some young and virile trekkers would actually scoff at all these “advantages”. They may even think that I’m some sort of a wimp. As more and more regulations are implemented to discourage solo trekking, many of these “heroes” are finding ways and means to dodge these services even when they are hardly saving any money.

For me, the utmost important thing in any trek is not to prove that I can do it solo, but to make sure that I’m still alive and well, with more routes to trek and more mountains to climb.

While most solo trekkers are prudent, know what they are doing and seldom get into trouble, they should realise that they are taking risks to their well-being or even their lives just to save some money. Nepalese guides have a reputation to protect. They never abandon their clients. Having one with you is great insurance and assurance.

Families of missing trekkers have urged the government for more support to ascertain whereabouts of their beloved ones.

Aubrey is missing since April, 2010 after she checked into Langtang National Park, while Zisimos was last seen in Namche Bazaar on April 23, 2012 and Matthews Allpress has gone missing since November 3, 2013 from the Annapurna Region.

Aubrey’s mother Connie Sacco said that her daughter is missing for the past four years.

“We have been coming here to meet concerned stakeholders and urge them to intensify search for my daughter,” Sacco said, adding, “I request the Government of Nepal and security agencies to do the needful so
that other trekkers don’t go missing like my daughter.”

Similarly, Margaret Allpress said his son was on solo trek to Dudhpokhari in Lamjung after completing the Annapurna Circuit Trek.

“He informed us November 3 from a guesthouse in Sikles that he would be out of contact for 9-10 days heading toward a place called Dudhpokhari and that he would back to catch flight to Sydney on November 14. That was the last time we heard from him,” a tearful Margaret said.

Matthews’ family has conducted land and helicopter searches to find his whereabouts, but to no anvil. They plan to resume search on April 28.

Likewise, Zisimos’ mother Pauline also urged government officials and security agencies to help her find their son. Zisimos has gone missing since April 23, 2012 from Namche Bazaar in the Everest Region. He was heading to
the Everest Base Camp.

I don’t think anybody can see the “wisdom” of saving money on guides/porters only to spend it on helicopter searches. Passengers on a flight that crashed or a ferry that sank are victims. What about trekkers who go out of their way to avoid being guided? They chose to play pilot/captain themselves. With all due respect to the grieving families, would getting lost not be solely their children’s own doing? Would you not hesitate to call them victims?

“I request the Government of Nepal and security agencies to do the needful so
that other trekkers don’t go missing like my daughter.”

But the government of Nepal already has a slew of measures to deter solo trekking so that the chances of “other trekkers” meeting the same fate might be reduced. What is the use of adding more measures if these willful and arrogant youngsters are going to find ways and means to dodge them and feel cool about it?