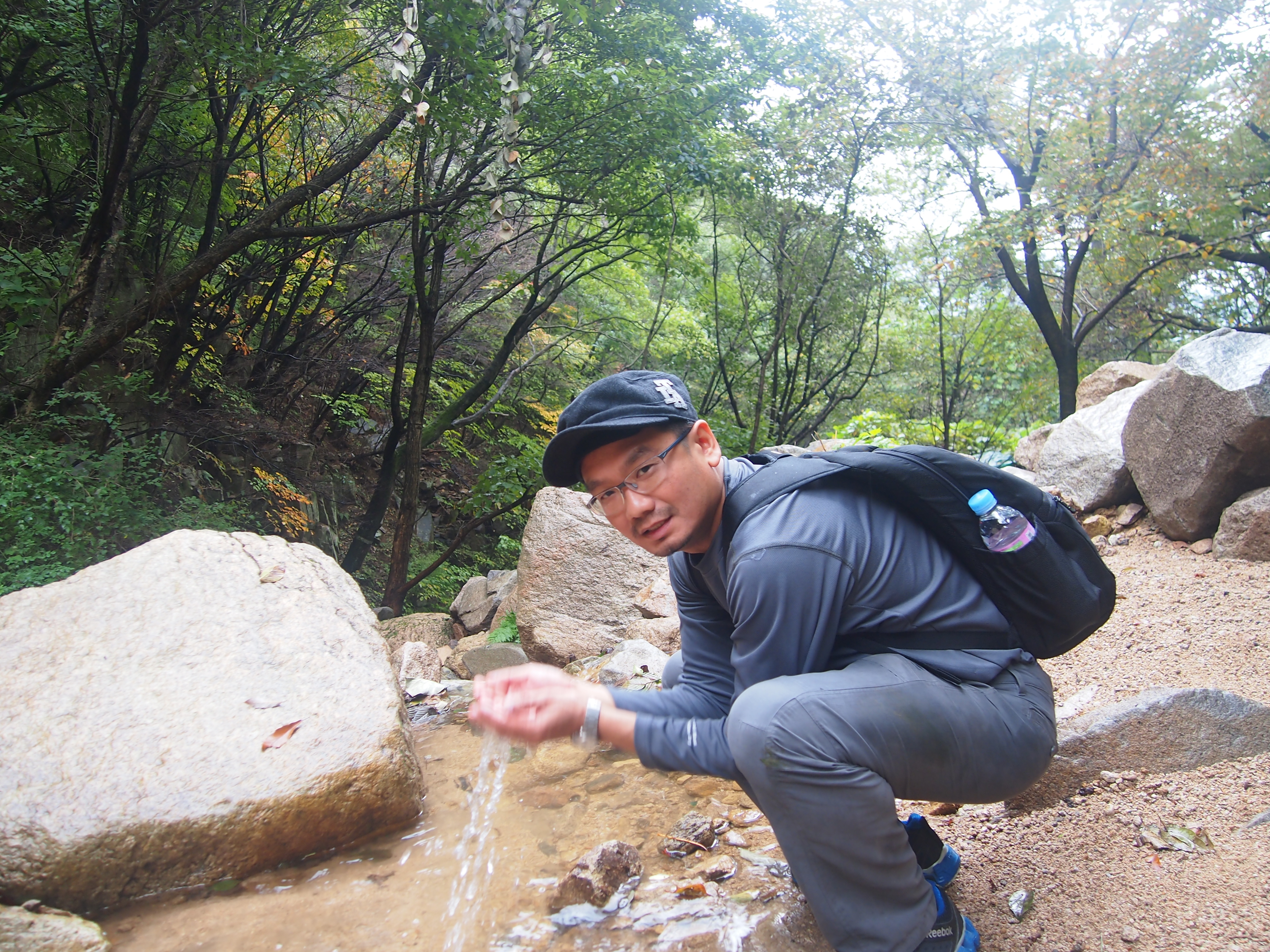 This Korean temple is not even mentioned in Wikipedia. Overshadowed by UNESCO Heritage site Seokguram Grotto 石窟庵 in Gyeongju, not many people (even Koreans) have not heard of it. While Seokguram receives hundreds of visitors a day and the stone Buddha is all but off limits to the public (no photography), this hidden gem gets my vote for the most spectacular temple in Korea.

Like Indiana Jones, I’ve got an obsession with antiquities – especially the mysterious and deserted ones hidden in the mountains. Seokbulsa 石佛寺 in Busan, South Korea is one such structure. Elusive and spectacular, it was one of my most memorable finds on this trip to Korea. Seokbulsa is actually a rather secluded hermitage. The entrance to the main hall faces the 10m image of a Bodisattva carved into a vertical rockface. On either side of the Bodisattva image, are prayer cells. On the left, are a series of steps that lead to a prayer chamber built into the surface of the rock.

A polished floor (shoes off) leads the way to the altar in the centre. Flanking the large bodisattva image in the centre, are two vertical walls, each with 3 equally large images, one of a Buddha and two of the temple’s guardian spirits.

Higher up on the rockfaces at the sides, are smaller Buddhas, still meticulously carved and defined in the hard granite. The sheer size and detail of these images will leave the visitor in awe.

Outside the rocky area, the temple is also beautiful. There are halls and rooms housing numerous Buddha images. Couplets expounding Chinese philosophy adorn either side of the entrances to these structures.

The main difficulties in finding the temple lie in 1) language problem and 2) the lack of reliable information. Many locals you encounter will have no idea where Seokbulsa is. Some may know, but unless you can understand Korean, the pointing and gesturing are unlikely to get you anywhere near the temple.

So how does one get there? The Lonely Planet has some sketchy or even misleading directions on how to get to Seokbulsa. I followed them and failed to find the temple. Here is my version and I hope folks who want to get there find my directions more helpful.

The first thing you need to do is to take the metro to Oncheonjang station on Line 1. Once you’ve gotten out of the station, resist the temptation to cross this overhead bridge even though there is a map of the park (Korean only) located at this exit. instead, walk away from this station in the direction of the Myeongyundong station. Not far down the road, you’ll come to an intersection where you’ll see these two towers.

Cross the main road and take the smaller road heading towards the mountain. The ropeway will soon come into view to tell you that you’re going the right way – towards Geumgang Park. On either side of the road, you’ll see many shops selling outdoor equipment.

The road is relatively flat at first, but will gradually slope upwards. When you reach the end of this small connecting road, you’ll hit another major thoroughfare. Turn right as the sign says. You won’t miss the main gate.

Entrance is free. The signboard is in Chinese characters, but they read Geumgang Park (right to left) in Korean.

Take advantage of the little English that still shows up on the signboards and look for “ropeway station”. You won’t miss it.

Take not of the operating hours of the ropeway. Make sure you get back to the top station before 6.00pm or you’ll have to get down on foot.

At this time of writing, the ticket was 7,000 won for a round trip. Hop on and have fun. The cable cars are crowded on weekends and virtually empty on weekdays.

Once you get out from the cable car station, stay on the flat path where the toilets are located. Just go on walking and you’ll soon find signboards directing you to Naman or South Gate Village.

Yes, Naman Village is 300m away. Walk in that direction.

Then, you’ll see this signboard. I was misled by a local here. Follow the red arrow and go downhill. In fact, it’s mostly downhill from this point onwards.

Naman Village exists for the sake of local visitors. There is a cluster of restaurants here with several volleyball courts. You may see a few cars parked here and wonder how they got up here. There is a sloping road here. Just for interest sake, heading uphill will lead you to the actual South Gate which resembles the entrance to a fortress.

The picture above is exactly what you’ll see when you approach Naman village. Do not turn in any direction as the Lonely Planet tells you. Go straight towards the hill standing right in front of you. You’ll find a very well-constructed public toilet. Turn left and the track continues downhill.

There’s yet another volleyball court here followed by ponds and vegetable plots. At what seems to be the end of this track, is the last restaurant in Naman Village.

As you may notice, this is not quite the end. Notice the narrow path on the left? Follow that path downhill.

You’ll come across a vegetable plot and a wooden bridge. Cross that bridge and move on, keeping the stream on your right all the time.

Follow the stream for some distance and you’ll come across a rope barrier. Follow the rope until you come to an intersection.

This sign says Seokbulsa. It points to a wide downhill path with ropes on either side. Descend all the way.

You will then come across these wooden steps. The stream turns into a mini waterfall here.

Follow the obvious path downhill. You will hit a sealed road with a steep incline. The signboard says 100m uphill to Seokbulsa, but it’s really more than that.

It’s a steep climb but you’ll soon spot this rock with the Chinese character for Buddha painted on it. This tells you that you’re going the right way.

Go all the way up and at the end of the road, you’ll see something like this.

The temples looks unassuming from this angle, but the awesome rock carvings lie within. I trust that you’ll be able to find your way there with my directions. When you get there, you’ll not only be stunned by the natural and artistic wonder of this location. You may be equally amazed that the trail is virtually rubbish free even though there are no litter bins around.

Enjoy your trek and don’t forget to buy a copy of my book, Knapsack Notes to show your appreciation.