This is what the now notorious Walk the Torq on Mt Kinabalu looks like. The via ferrata on Mt Kinabalu has been touted as the highest via ferrata in the world. It’s a magnet for the thrill-seekers. The conventional summit trails quickly became “tourist” or “sissy” trails. Their website says::

Experience the excitement of mountaineering within a safe and controlled environment. With a proper system of routes, devices and an experienced trainer to guide you, Via Ferrata climbing allows anyone to experience the exciting challenges of this sport under the safest of conditions.

Yes, it’s kind of scary but not dangerous if you know what you’re doing. There are two carabiners on the harness. One carabiner should always be clipped on the rope so when you transfer from one anchor to the next. You’ll only be off the rope if you’re stupid enough to unclip both carabiners at the same time.

Sure, it’s all very “safe” and “controlled”. It doesn’t matter if all that is true if and when the mountain is behaving normally. I’m not sure exactly what to expect if an earthquake strikes, but I guess you’ll probably get boulders tumbling down the steep slope. That means you’re very vulnerable – in other words, a sitting duck. Let me share a few photos from personal experience. 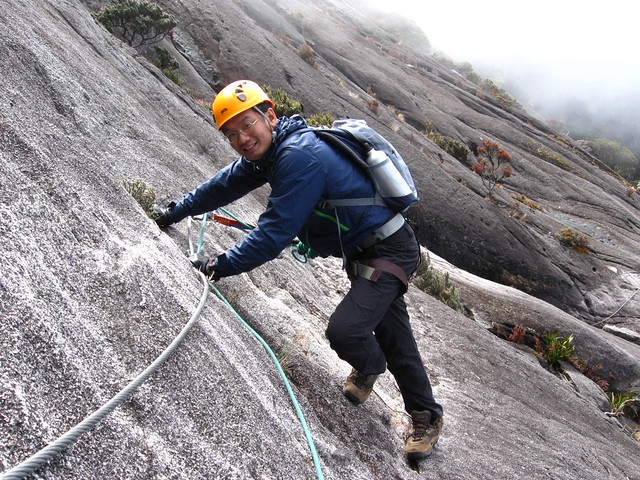 That’s me on the Walk the Torq route in 2010. This is the final part where we moved sideways into the forest. 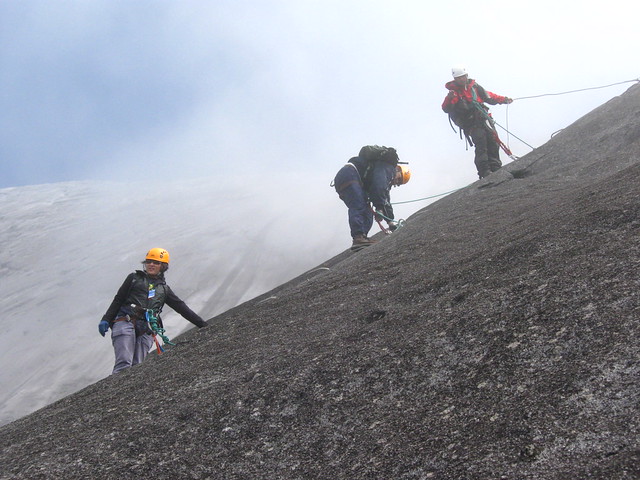 The entire “detail” was “strung” together. Almost all were newbies. 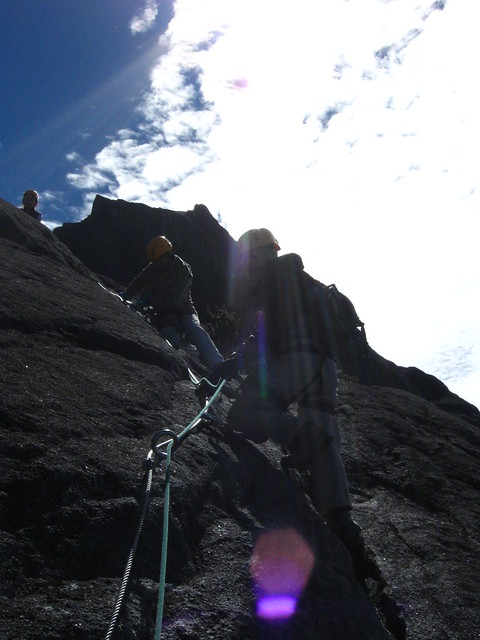 Some parts are really steep but there are steel rungs embedded in the rock to help you. 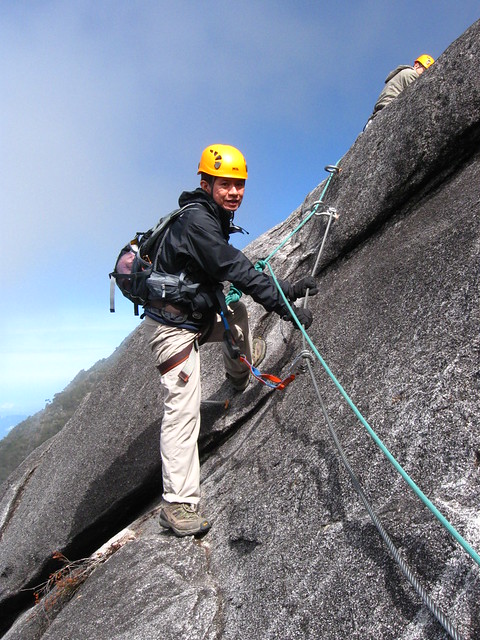 That’s my pal Raymond – a complete newbie who thoroughly enjoyed himself. Note that the via ferrata is an optional part of the Mt Kinabalu experience. Most people would only do the summit trail either from the conventional Timpohon Gate or Mesilau Resort which is about 3 hours longer. It’s all pretty tame. 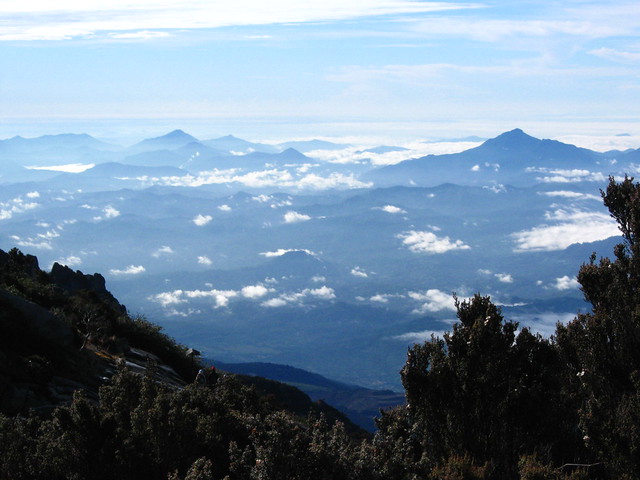 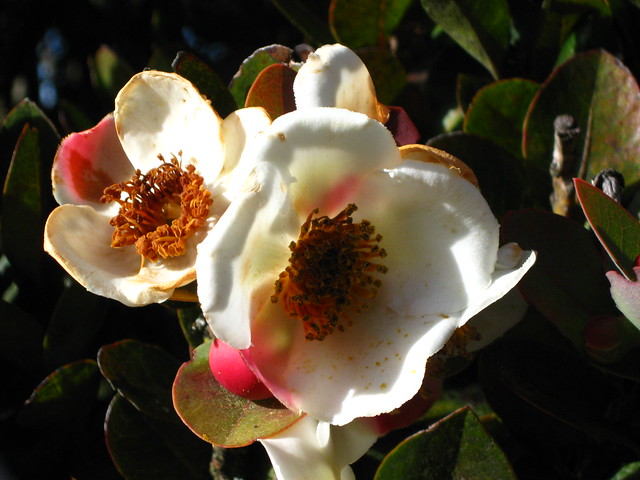 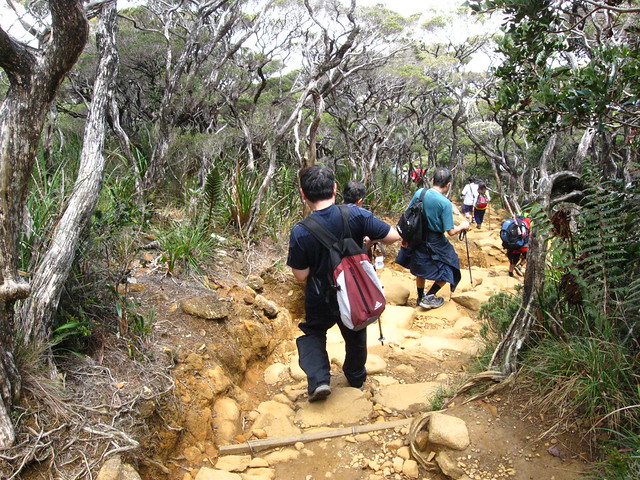 What’s my take? Is Mt Kinabalu safe for 12-year-olds? Well, the summit trail you see directly above can’t be that dangerous even when there’s an earthquake. The via ferrata, on the other hand, is something I won’t recommend for anyone under 16. I have heard grown women scream while descending from it. Unlike a roller coaster, you have to be proactive in pulling in the slack and crossing over to the next anchor. If you panic, you’ll be stuck. Not only you but the rest of the “detail” will also be stuck. The guide warns at the beginning of the via ferrata that there is no turning back and no way out except at the end. Clearly, that makes it a must-do for the young and virile, but it’s not going to be fun if something unexpected occurs and you need to get out fast.

I need to do a bit of an update here. Someone asked me what I would do if I were caught in a rockfall on the via ferrata. Well, like a safety belt, the rope restricts your line of descent. Remember the guide has warned us at the beginning of the via ferrata that there is no turning back and no way out except at the end? Screw the safety rules. Be a hero. Unclip both carabiners, disengage from the rope and quickly boulder (verb) sideways towards the forest or under some overhang. Be careful not to plunge into the abyss as you’re trying to do that. Everyone doing the via ferrata should be competent enough to execute a semi-suicidal disengagement drill.

The via ferrata is one activity I would not recommend for primary school students. This is no child’s play and only macho hunkles like me should be doing it. The organisers of this trip have been pushing it as if they were not satisfied with the kids just doing the conventional summit trail. However, almost anyone else would also have a slim chance of survival if they were in the children’s shoes. It’s either them or them. Nevertheless, I salute the teachers who reportedly shielded the students with their bodies when the boulders fell. It was a noble and selfless act.

May the deceased rest in peace and may Singaporeans get over this and continue climbing. Folks who are pointing their fingers at MOE, the schools and even the teachers should note that more people die crossing the road than climbing Mt Kinabalu. For tens of thousands of students over the years and all over the world, it has been a rewarding and uneventful trip. The earthquake was a freak natural disaster.