Trapped In A Flooded Cave In Chiangrai 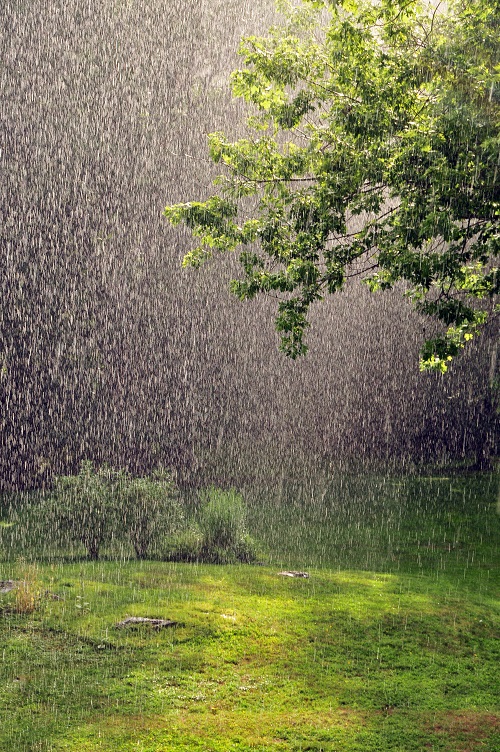 12 boys and their coach from a soccer team are trapped in a cave in Mae Sai district (northern most district in Thailand). Known to locals as Tham Luang Nang Non (Royal Cave of the Sleeping Lady), it is located just 1km from the main Chiangrai-Mae Sai highway leading to Myanmar and is thus a popular recreation spot. However, I have not been to the cave myself.

At 7pm in the evening on 23 June 2018, national park officials patrolling the area found a motorcycle and 11 bicycles near the entrance of the cave. The entrance is reached by descending to a creek and then crossing it. Park officials went into the cave but found no sign of the team. They abandoned the search as the water in the creek was rising fast and threatened to submerge the entrance. True the creek soon swelled with water from Doi Pha Mee (Bear Mountain) at a rate of 10cm an hour. The entrance to the cave was soon flooded. Below is a graphic illustration of cave complex.

The commentary begins with “3km from the mouth of the cave is a sam yaek” which is really a T-junction. The water in the jucntion reached a depth of 5m. The boys must have entered before the water rose to that level. It is completely dark in the cave and there is only one path which leads to dry ground – the main chamber of the cave. Since the boys and their coach are familiar with the cave, it is believed that they had gone there. The chamber also slopes upwards deeper into the cave, so it is likely that they have moved in that direction.

Below is the timeline taken from ThaiPBS:

June 23, 2018
10.42am: Coach Ekapol Chanthawong posted on his Facebook page a 5-minute video of live training of the football team.
3.00pm: Park officials, before closing the park’s office, spotted 11 bicycles left in front of the cave entrance.
5.00pm: The parents of one of the football players called their son on the phone. They learned that their son and friends were inside the cave.
9.30pm: Siam Ruam Jai Mae Sai Foundation was informed by the chief of Ban Chong that a number of young footballers aged 11-16 went missing in the cave.
10.00pm: 191 radio center of Mae Sai police was informed that a number of footballers had gone missing in the cave. A police patrol from Tambon Pong Pha was dispatched to the scene.
June 24, 2018
1.00am: Siam Ruam Jai and Samakom Sirikorn rescue teams went into the cave with rope and oxygen tanks.
3.00am: The rescue teams withdrew from the cave. They found inside the cave 12 pairs of sandals and a number of backpacks at a spot inside the cave.
3.30am: The two rescue teams held a joint meeting with administrative officials, national park officials, police, soldiers and local leaders. The meeting agreed to temporarily stop the search and the rescuers had become tired and the water level in the cave continue to rise.
4.00am: The search was temporarily suspended.
8.00am: Altogether seven rescue teams of the National Parks Department and Mae Sai district went inside the cave against. They planned to pump water out of the cave but could not carry out the plan as the water kept rising.
1.00pm: A team of divers examined the cave, which was about 5 meters underwater. They went for a distance of only 15 meters and decided to withdraw.
6.00pm: Prachan Meeboon, the rescue director of the National Parks Department reported that the divers had problems. They contacted the navy to send a Seal team of 16 frogmen to join the search.
June 25, 2018
00.10am: A combined team of 10 soldiers and border patrol police went into the cave.
00.30 am: a Seal team of 16 frogmen traveled from U-Tapao International Airport
00.40 am: a rescue team of 3 from Mekhong Riverine Unit Headquarter (MRU.) joined the search
01.45 am: The Seal team arrived at Mae Fah Luang – Chiang Rai International Airport (CEI).
02.00 am: A set of Seal
02.45 am: The Seal team split into 4 groups, the first group went into the cave jointing the previous rescue team.
08.30 am: The Seal team blasted the sand out of an underwater passageway and able to access the other side of the cave which expected that the missing group will be at this point. However, they had found no sign of the missing group.
10.00 am: Diver team dived into 5 meter-deep water and found the entrance to the main hall with 7 kilometers long leading the end of the cave. Footprints of the missing team have been found but the rescue team haven’t find the group.

Below is a 2D, cross sectional view of the main chamber of the cave which stretches for some 3-4km.

The good news is, divers have managed to reach the dry chamber some 3km long, but unfortunately, found no sign of the boys and their coach except for their footprints and a backpack. Beyond that the passage is flooded in many spots, some reaching the armpit and some above the head. 3-4km further down the passage is the exit. Could the boys have walked that distance before the passage became flooded? Another team of rescuers have blasted sand and mud to clear the passage from the exit of the cave. They managed to enter through the exit but also found no sign of the boys.

Rescue teams said that even if the boys were found, it would be a challenge to bring them out as by that time, the water might have reached over 8m in depth if the rains continued. The best thing that can happen now, is the water receding.

2009 at Khao Laem National Park on my way to a waterfall – alone. I knew when to turn back! 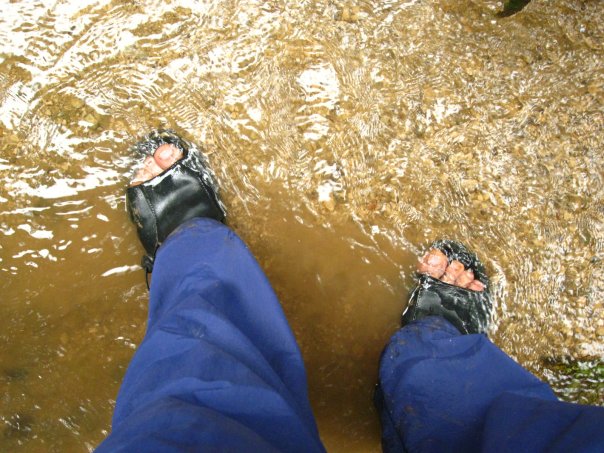 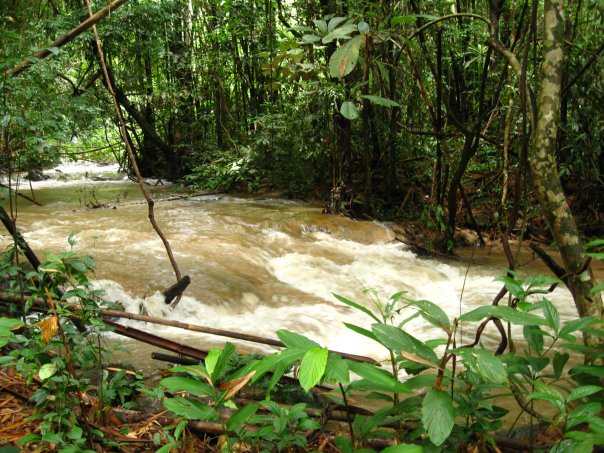 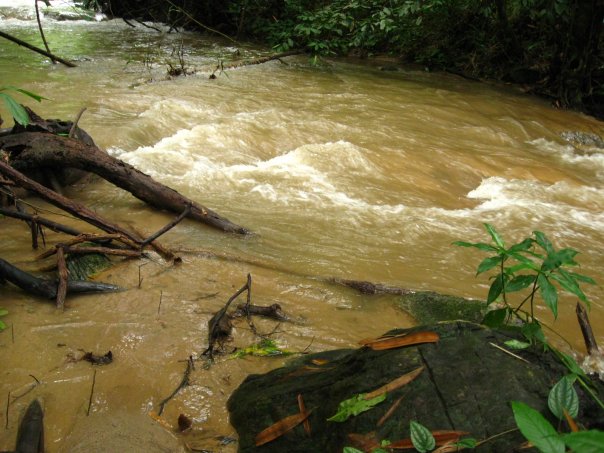 The boys have been found. They appeared in much better condition than expected, demonstrating amazing will to survive. They had the presence of mind to drink from water seeping from the roof and not from the flooded pool.

Four months’ food supply have been delivered to the boys. Navy seal volunteers are also staying with the boys until they get rescued.