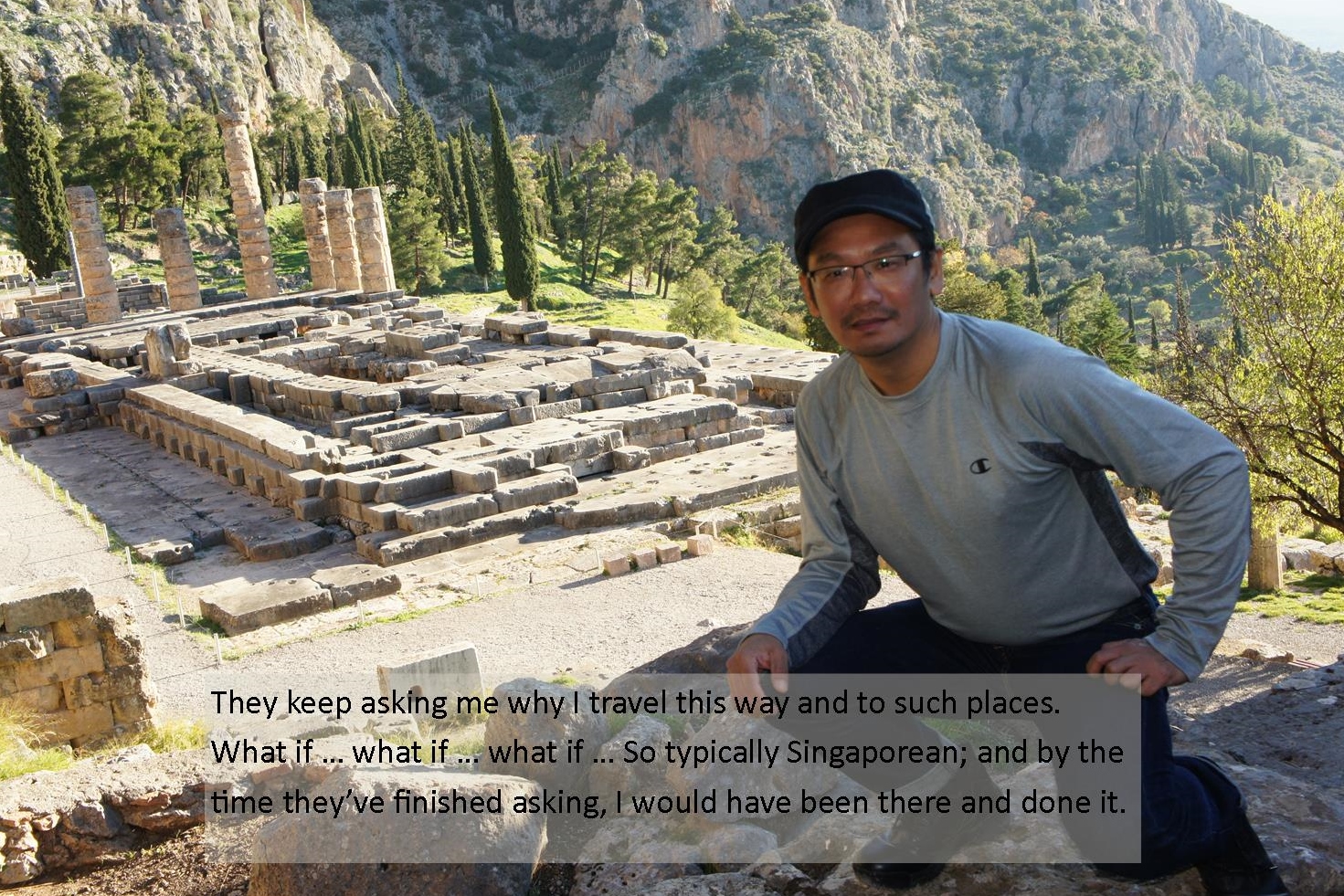 Many people who don’t know me well are aghast when they hear that I travel solo. Why take the trouble? How do I ensure my own safety? Well, the fact is, nobody can ensure your safety even if you’re on a luxury cruise. Ask the ghosts on the Titanic.

The truth is, nothing ventured, nothing gained. The risks can be calculated and managed. The rewards from solo or independent travel are enormous. Over my decades of independent travel, I’ve not just gained valuable and authentic insights into the places I’ve visited, I’ve even forged some very meaningful long term relationships with folks in exotic foreign lands.

In over 30 years of independent travel, I believe I don’t need to touch any wood when I say that I’ve never been robbed, cheated in a big way (just the usual rip-offs) or had any valuables stolen from me. I knew better than to follow friendly touts in Thailand and end up buying overpriced gems, yet I’ve made friends with Thais who had nothing to sell to me. I have never fallen asleep and woken up with all my valuables gone, yet I’ve partied till the wee hours of the morning with trustworthy friends. Some people tell me that I’ve just been lucky (for >30 years). While I admit that luck may have a part to play in my mostly pleasant encounters, I also believe that my instincts, judgement and intuition played a bigger role. I can’t say that I can read minds, but I don’t court trouble and I can often tell when someone is up to no good.

There’s usually a reason people get into trouble. A nephew of mine was backpacking through India. He met a very nice guy on the train. He was offered some food and was totally knocked out after that. Yes, he had been drugged. When he woke up, all his belongings were gone. Traveller’s theft. The culprit was a local who had been planning this and waiting for his victim. The moral of the story? Obvious, right?

Recently, an acquaintance of mine, a young lady (featured on Mothership) who has been bravely travelling in North America during the pandemic, ended up in a horrible situation. Miss Isabelle Leong woke up one morning in her friend’s apartment at Playa del Carmen in Mexico to find her laptop, her mobile phone, wallet and her smartwatch missing. You can read the details here. Another case of traveller’s theft, albeit with a different kind of suspect/perpetrator. In fact, bizarre as it may sound, I’ve heard more stories of people on long sojourns having things stolen by fellow travellers than by the natives. Anyway, the first thing that aroused the Sherlock Holmes in me was this:

“What’s STRANGEST was that none of Matt’s belongings was stolen – not his Macbook nor his phone – just my most valuable items in the world.“

So in this place in Mexico called Playa del Carmen, Miss Leong was staying in the apartment of someone by the name of Matt, a British Instagramer residing in Mexico. She met him online.

“I had NO clue if I’d be able to recover anything back from my laptop, and most of all, I had no idea if I could trust the person I was living with, which 3 days before, we barely spoke more than a sentence to each other.”

But then she later mentioned that …

“We spent the first few days really getting to know each other’s businesses and sharing online marketing tips and experiences – it was a really enriching conversation we shared on our walks to the beach. In the first 3 days, I was introduced to his friends who all work online – in eCommerce, as coaches, software engineers and the like.”

Sounds a bit confusing, doesn’t it? Then interestingly, Miss Leong claimed that she only began to suspect that Matt was involved in the theft after communicating with her friends and seeing his reluctance to go to the police. As if to redeem himself, Matt offered to help her out and lend her some money but had second thoughts after receiving a call from his friend.

“This was THE friend who advised him against going to the police and to move on with life because the day is precious. He wanted me to forget that my 2 most important items in my life and my life’s work were rudely snatched away from my life permanently just 8 hours before and instead to seize the fucking day?! Trust a “7-figure entrepreneur” to say that.“

The last sentence made it all clear to me. Whether it’s Miss Leong, Matt or that “7-figure entrepreneur” (forgive me for sniggering), these folks represent a whole new ball game in “travel sharing” and e-commerce. You may call these unconventional career paths, but I have my reservations as these folks thrive on drama, fantasies and illusions. They are more into selfies and baiting followers than the kind of travel writing/sharing that my generation of genuine travel writers was passionate about. We shared true stories. We talked candidly about experiences and we carried our photo albums around. We had few means to blow our trumpet or manipulate followers and sponsors. We didn’t pretend to be wealth-creation gurus on social media or boast of 7-figure incomes.

Whether online or in real life, I stay clear of folks who claim to be 7-figure entrepreneurs. That ought to have been an instant red flag – not only after your mobile phone, laptop and wallet have gone missing. It’s a pity Miss Leong didn’t see this coming. I love adventure and I do take risks, but I would never ever sleep in the apartment of someone I’ve known for only 3 days. Finally, if you chance upon a damsel in distress, with the story just like Miss Leong’s and she asks you for help (send money) would you rush to her rescue?

Anyway, for those who are curious or concerned, Miss Leong has settled in quite nicely at her next travel destination in Mexico, Oaxaca. She really bounced back quickly from this one. Amazing. I would have come straight home.