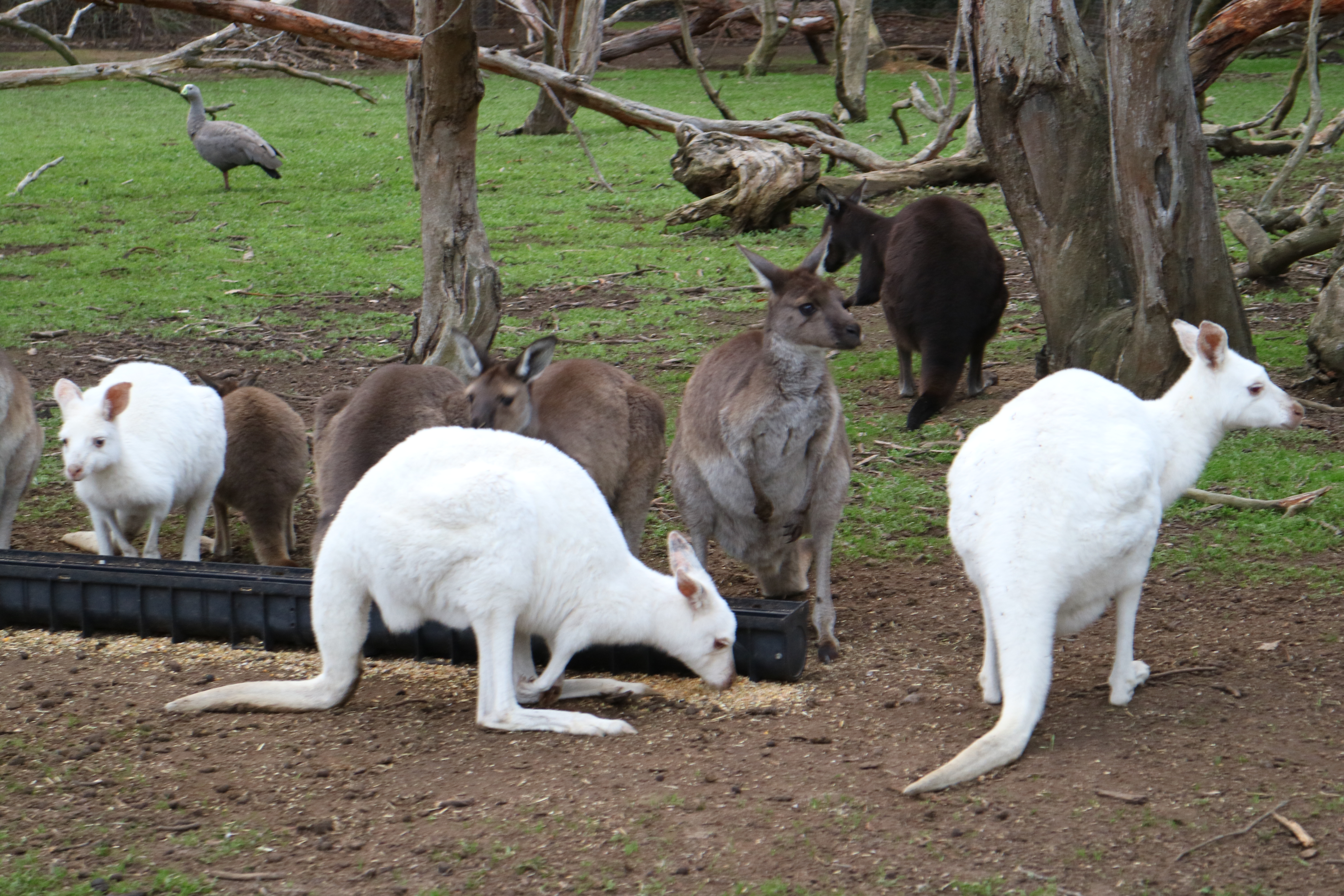 I’ve not planned on any city tours on this Aussie Odyssey. The main reason for stopping by at Adelaide was really to visit Kangaroo Island. Adelaide may be a charming city with wide boulevards, large public squares and “colonial” buildings, but there was really not much in terms of adventure. 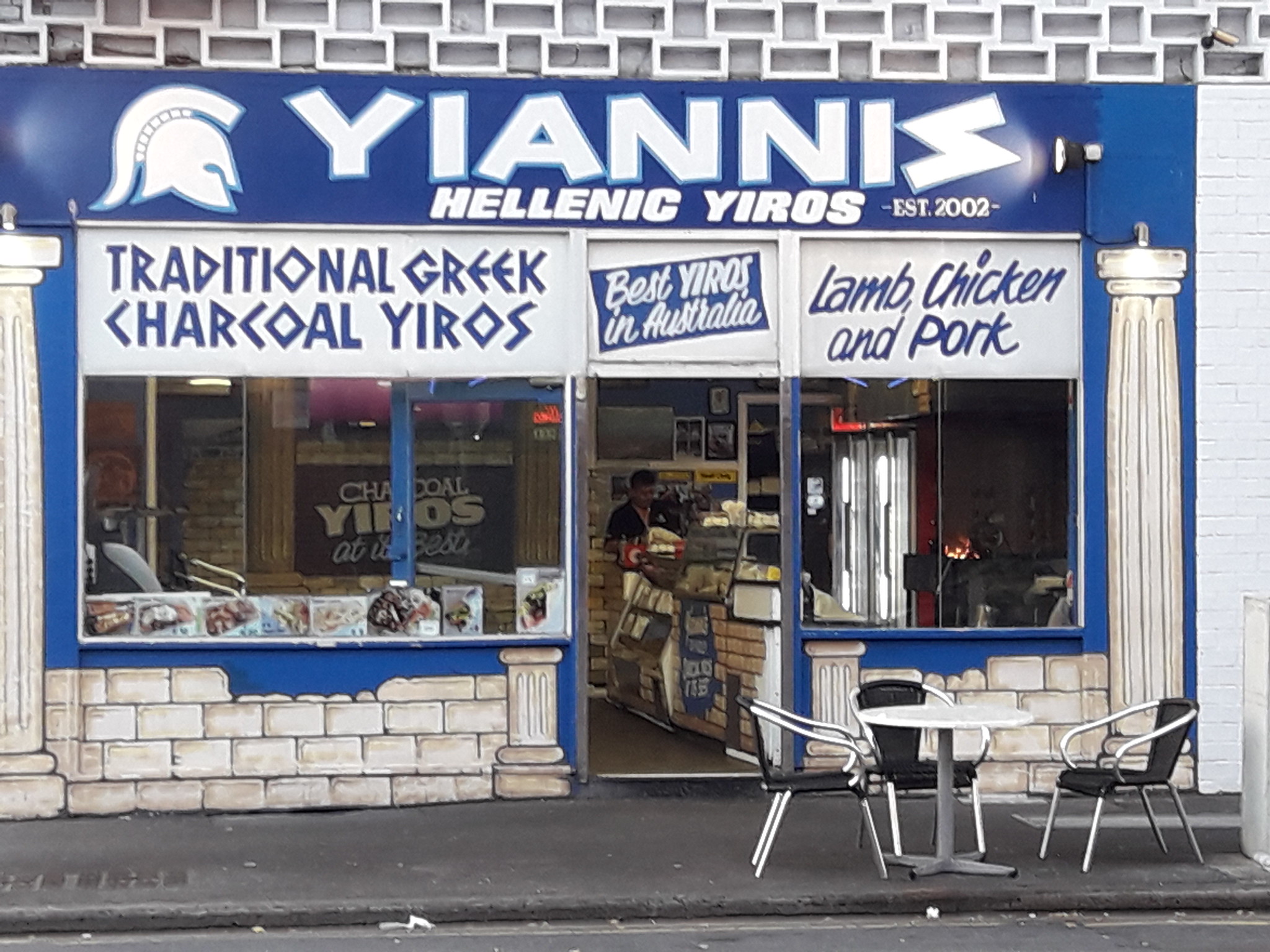 Following our rather enthusiastic Greek taxi driver’s recommendation, we checked into a Greek restaurant not far from our hotel. The roast lamb gyros was fragrant and juicy, but the 3 of us just managed to finish it when the stoic-looking chef came along and filled our plate with a generous top up of sliced lamb and chicken. 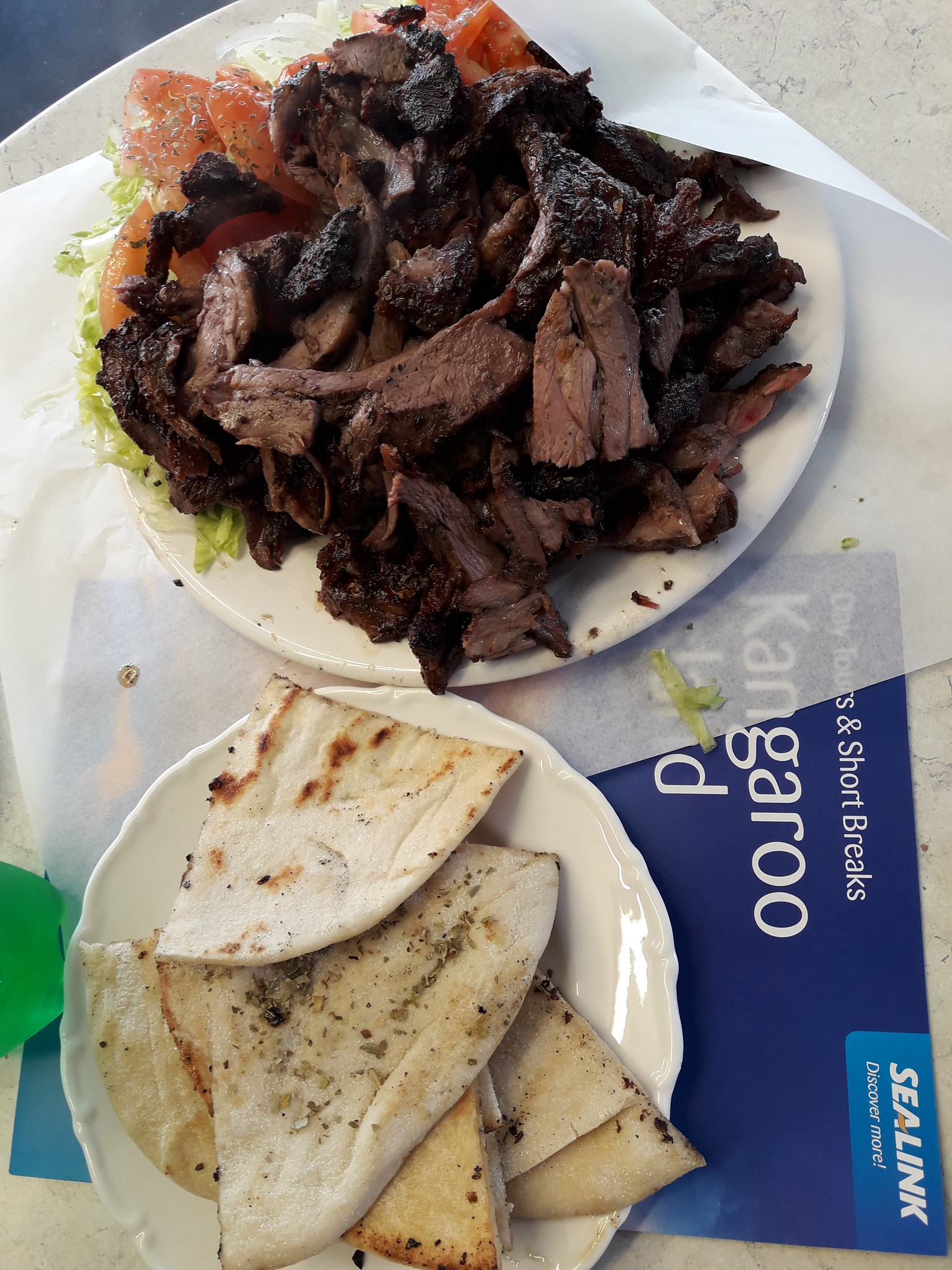 With our stomachs close to bursting, I booked an Uber ride to the Sealink office to book a trip to Kangaroo Island. A search online only turned out tours that departed on Wednesdays. When we arrived, I was dismayed to find the place was closed. I called the number. Someone answered and informed me that they were closed because it’s Queen Birthday.

Could I book a tour to Kangaroo Island? Yes! I must say that I was rather impressed by the amount of information I could get over the phone. This guy really knew his stuff. In just about 20 mins, I managed to settle everything from the type of accommodation to the kind of meals. There were two options as far as tours go. One was the backpacker’s tour and the other was the more “civilised” tour. There was little difference in price. With the tree-extracting experience in the Red Centre still fresh in my mind, I opted for the the more “civilised” tour.

We checked out from our hotel and boarded a bus for the ferry terminal at Cape Jervis. Not far outside the city, the signs of human habitation began to fade. There were trees and forests everywhere. No wonder the bus driver on the return journey 2 nights later was afraid of knocking down a kangaroo. It was a ride that took 2 hours. We emerged from the forest and the clear sky and the shimmering sea opened up like a refreshed screen before our eyes. We were at the edge of the continent. This was the realm of jagged shorelines, distant horizons, cheery birds and damp, salty breezes.

It was a car ferry, but we had to unload our bags from the bus as we had to board another bus on the island. After we alighted from the bus, the driver gave us our boarding passes. The passenger’s lounge was small but cozy, with a cafe and ticketing counters managed by friendly yet highly dignified staff who don’t look like they are ready to take abuse from the snobs.

Our voyage soon started. The inside of the ferry was even cozier than the lounge. Some seats came with tables and there was even a simple cafe onboard. The deck above provided some great views of the rugged coastline of South Australia. The sea was relatively calm that morning and once the ramp was lifted, we pulled away from shore. There wasn’t much to see from the deck save a few passing boats and dolphins that swam alongside the ferry for a few brief moments.

After about 45 mins of smooth sailing, we arrived on Kangaroo Island. Two large coaches were waiting at the pier, one was for the 1-day tour and the other for the 2-day tour. The moment we boarded the 2-day travel coach, I felt like Gulliver. Just a couple of days ago, I was easily the oldest guy in the group on the trip to the Red Centre. On this trip, however, I was probably the youngest adult. Our guide Michael gave us the obligatory welcome speech and introduction to Kangaroo Island.

I soon regretted not joining the more rugged tour. Our first stop was some eucalyptus oil distillery. It was somewhat educational, but a lot of shopping was expected and the aunties on the bus didn’t disappoint. I then realised why this tour was so cheap in spite of the accommodations being better than the backpacker’s trip. 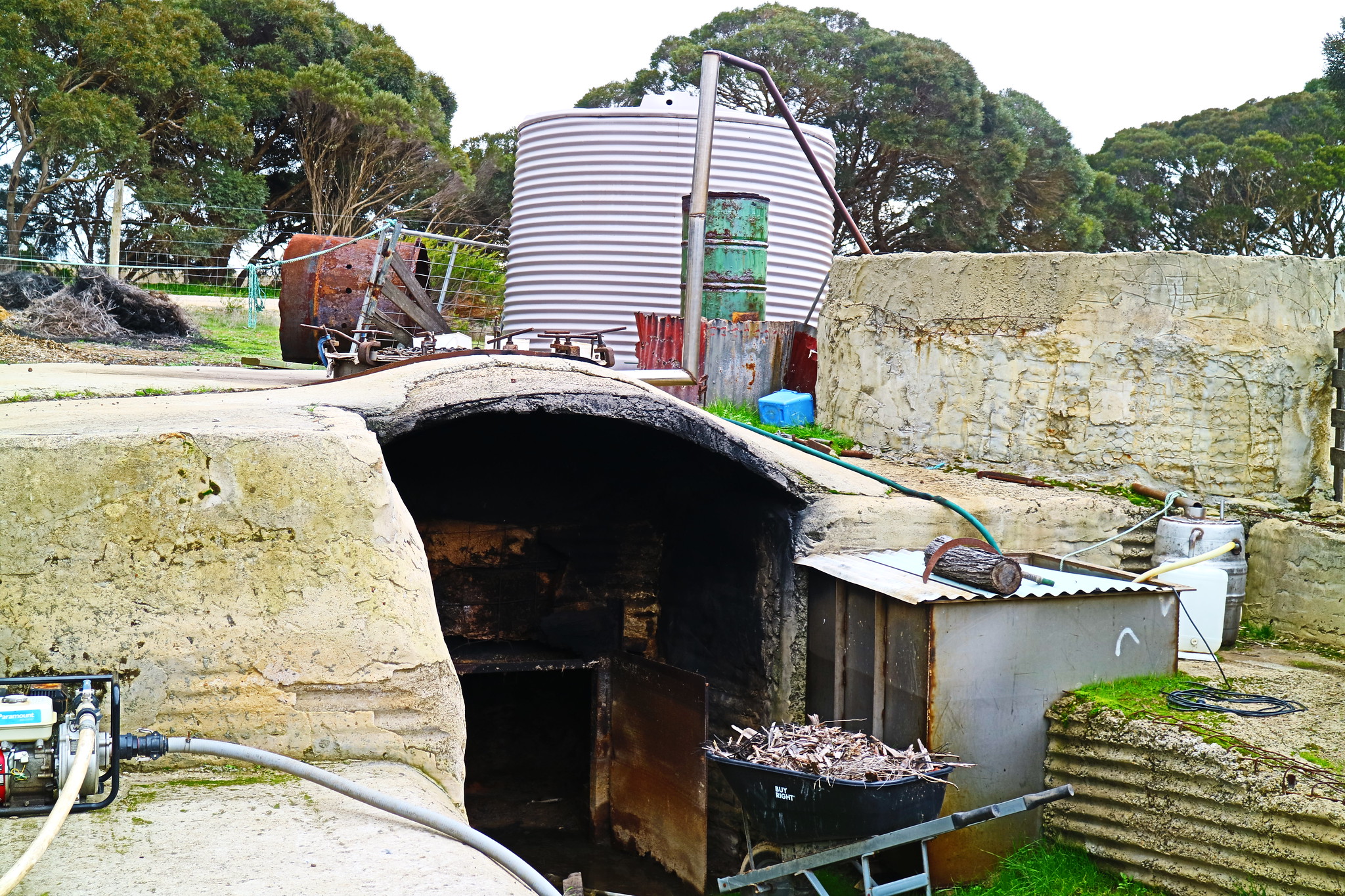 But my regret soon melted away when we were brought to our lunch stop at Vivonne Bay. The food was great. There were grilled vegetables, delightful pasta, juicy baked chicken and a marvellous cheese cake for dessert. After lunch, we made a trip down to watch some seals lazing around on the beach. It was a strictly guided tour with no one allowed to wander too far beyond the watchful eyes of the hard-nosed guide. 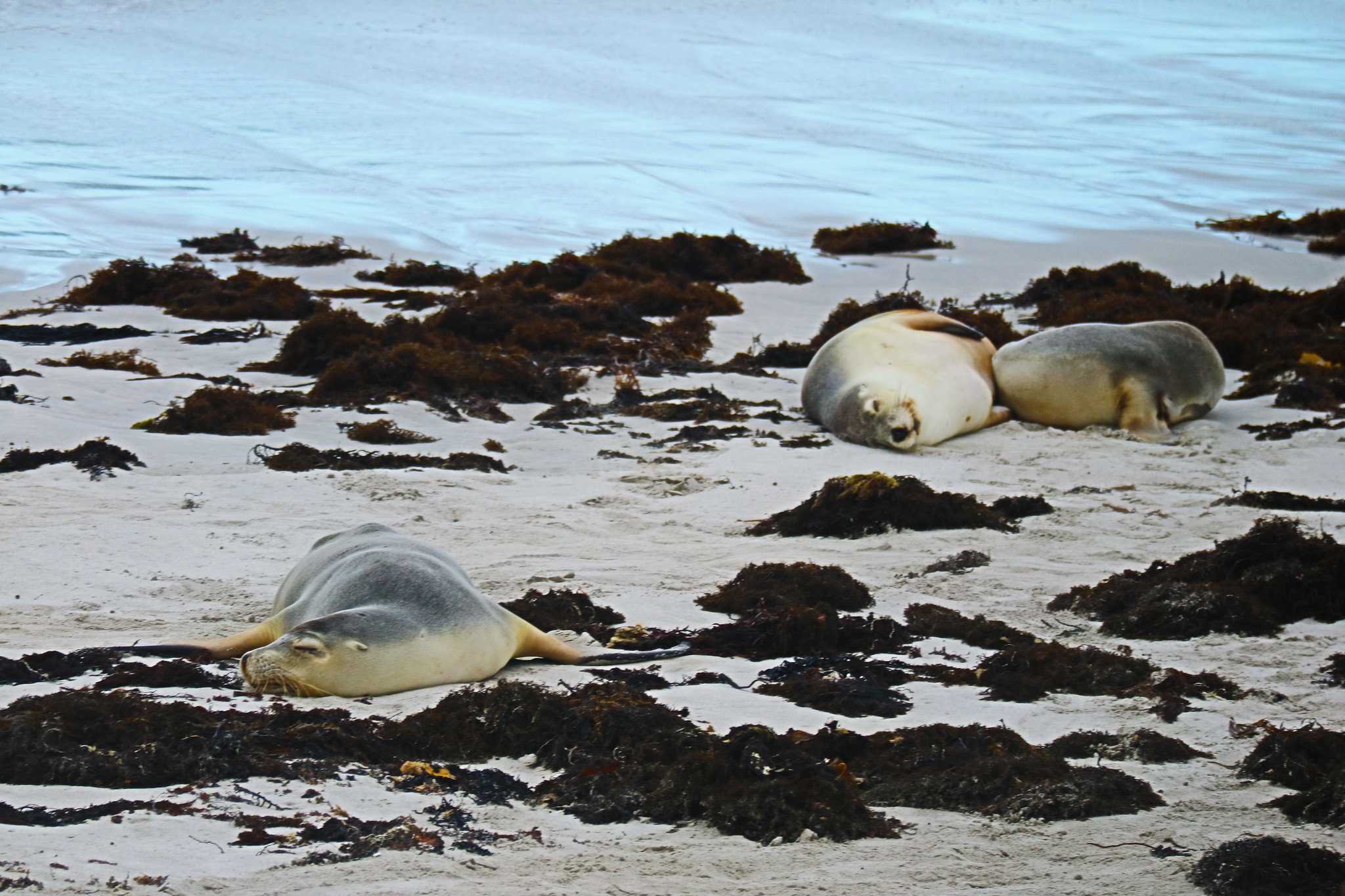 After checking the seals out, we were ready for something livelier and yet less stressful. Birds of prey. It was an interesting display wings and talons in action and not surprisingly, everyone was more engaged here than on Seal Bay. We could handle the birds and feed them, making this a much more interactive and enjoyable experience.

The last item on Day 1 was Kangaroo Island Wildlife Park. There were a couple of koalas, snakes, dingoes, emus and crocodiles here, but the main attraction here are the friendly Kangaroo Island kangaroos. Apart from the roos, the rest were pretty much a waste of time. It was also getting dark by the time we were done with the store. 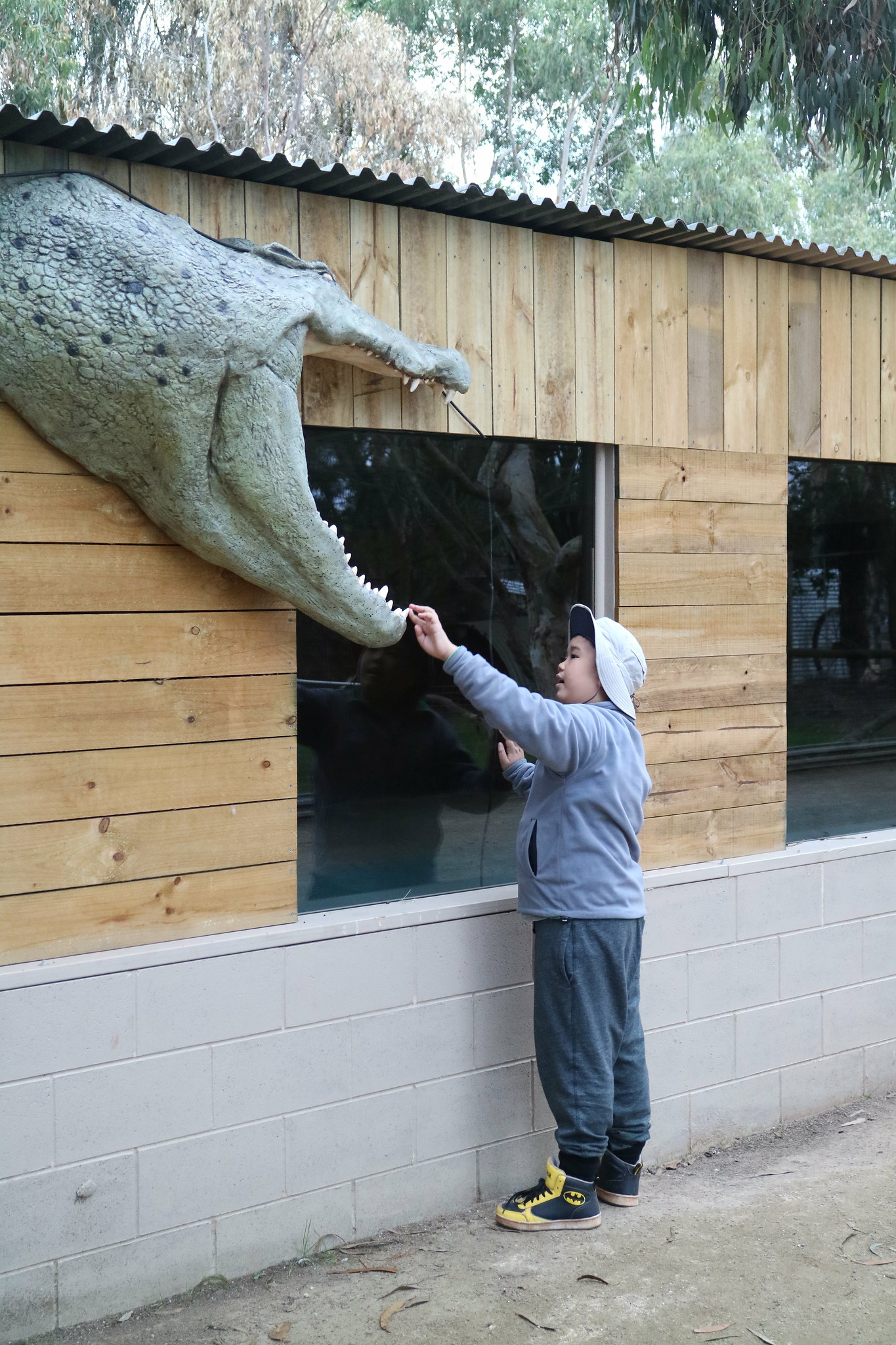 We spent the night at a motel in Kingscote. It was a bit of a challenge finding a place to have dinner when it was pitch dark at 6.00pm, but we managed to locate the pizza place recommended by the receptionist. Almost all the other shops/makan places were closed by then. 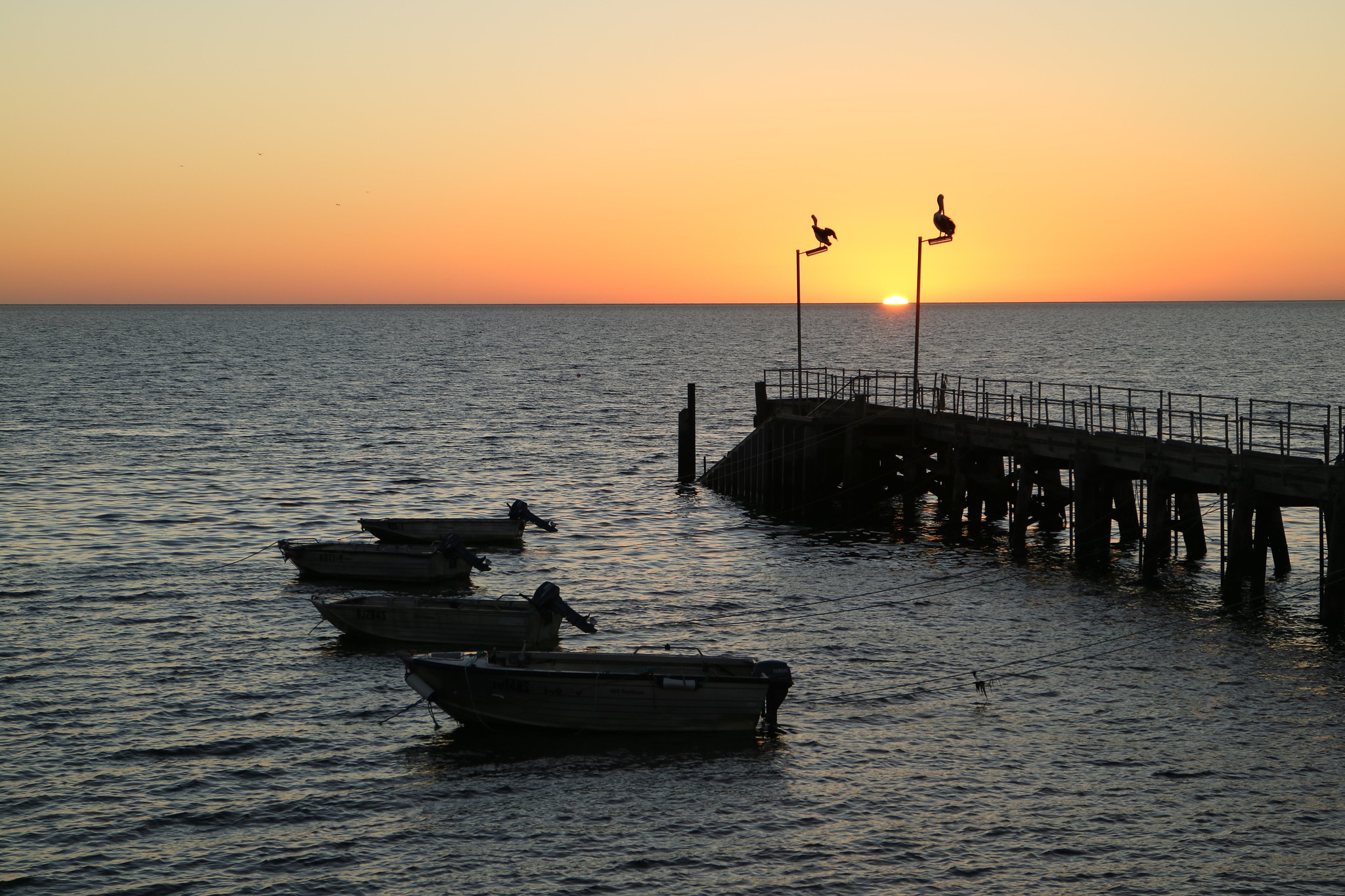 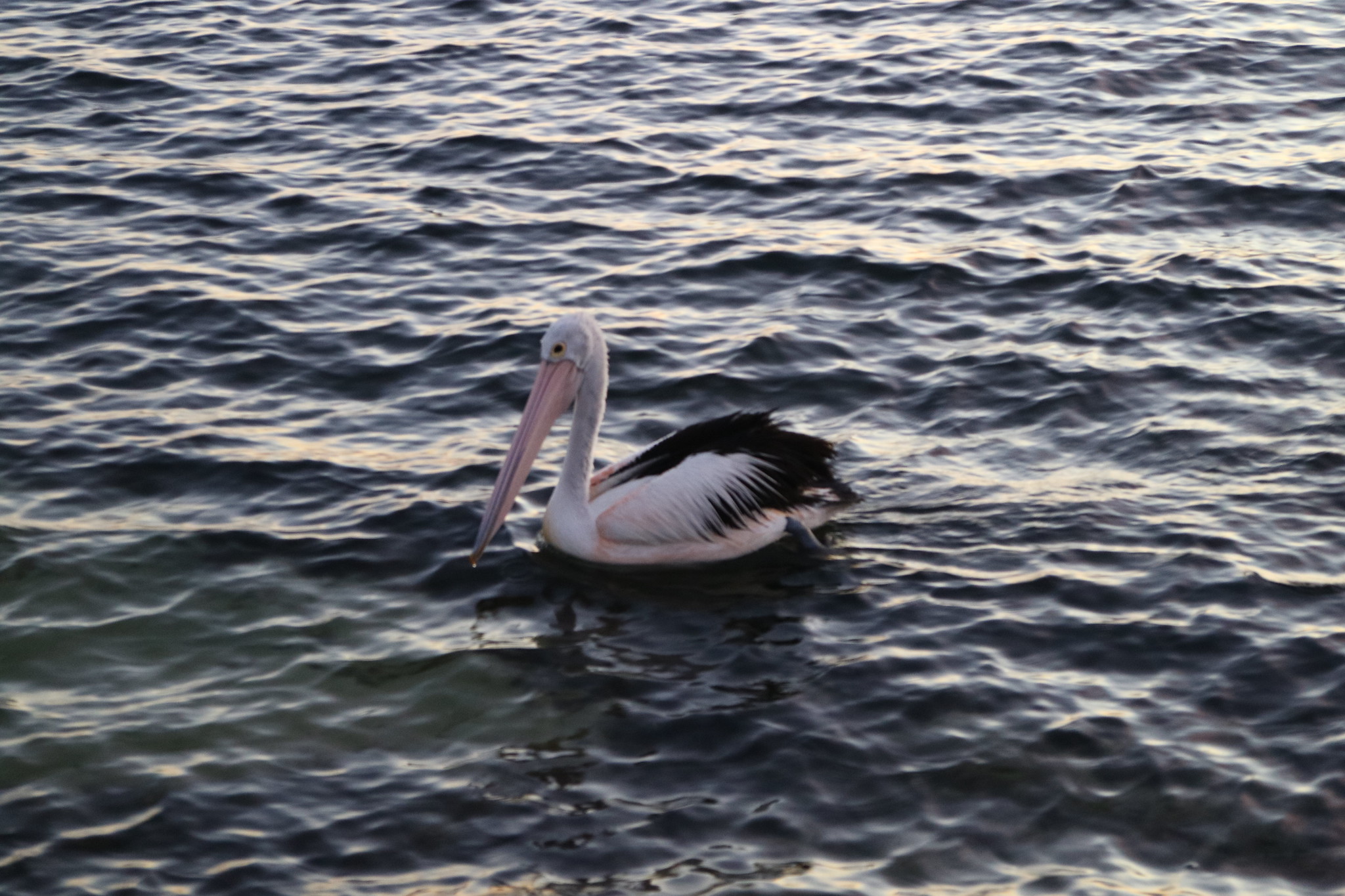 Sunrise on Kangaroo Island was a most magical moment. It was distinctly chilly, but the warm, constantly changing colours brought much comfort to the eyes and mood. I approached the pelican feeding area where there were steps leading down to the water. There were no feeders yet, but already, a few of these magnificent birds were waiting for breakfast. I was reminded of the movie Finding Nemo. How observant and creative the makers of the animation were. 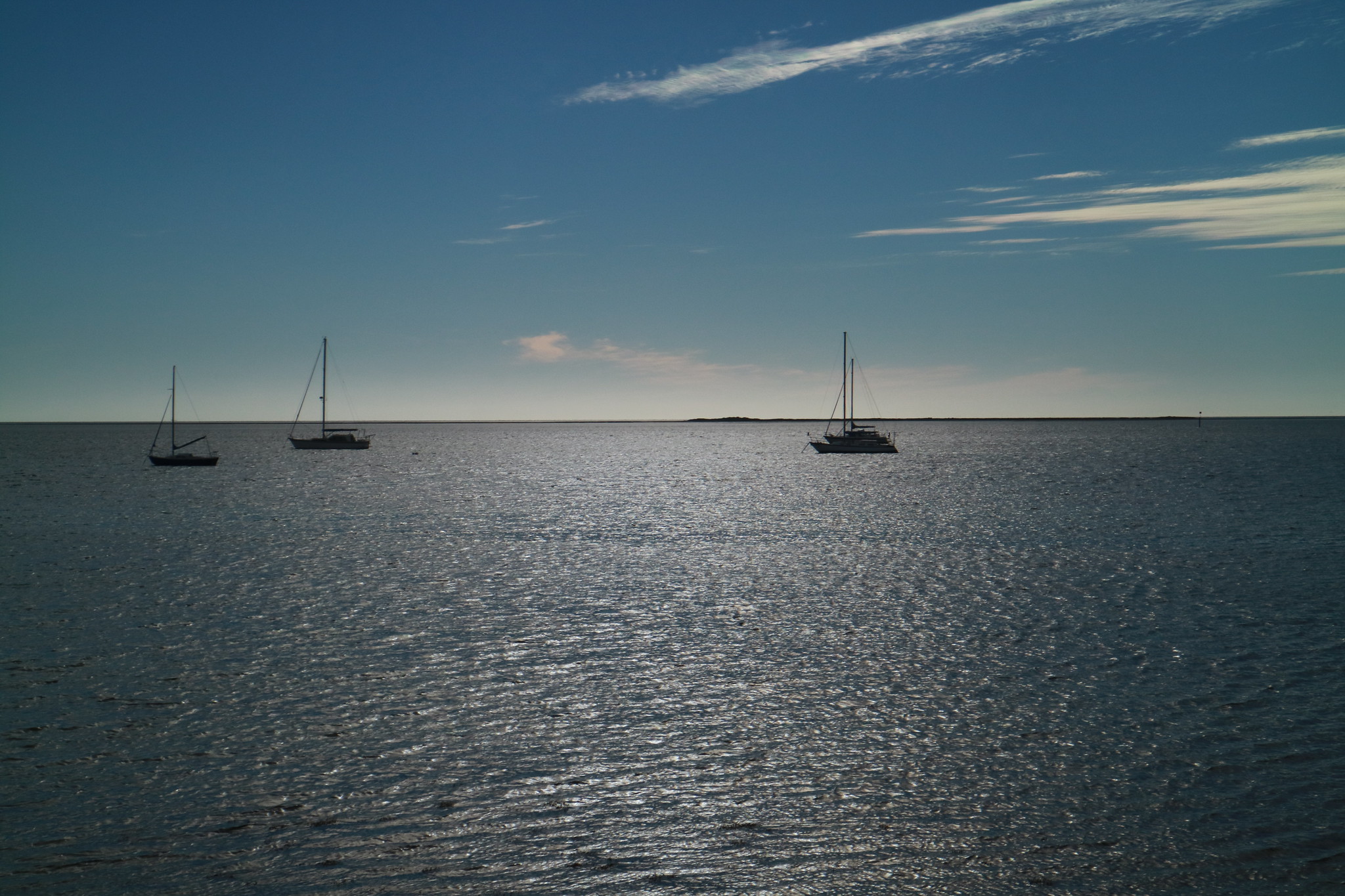 The ocean was calm, almost glassy from a distance. I woke the boys and we went to the supermarket to buy come cup noodles. Electric kettle, utensils and complimentary tea bags and instant coffee were all available in our room. After a quick breakfast, we packed up, checked out and didn’t have to wait for long before our coach arrived. Our first stop was the honey farm. My No. 2 was so excited with the mention of ice cream, but he didn’t really like it.

After that, it was a long drive to Hansen Bay where we had lunch. Regrettably, it was nowhere as good as what we had the day before. Once we were done with lunch, we were on our way to the western end of Kangaroo Island – Flinders Chase National Park. And this is probably the most attractive part of the whole island. If we ever come back again, this would be where we’ll spend the most time.

As we descended towards the coast, a thick green forest was laid out like a carpet. From a distance, the road was totally concealed. Without it, one would be totally lost in this strange seemingly homogeneous forest. 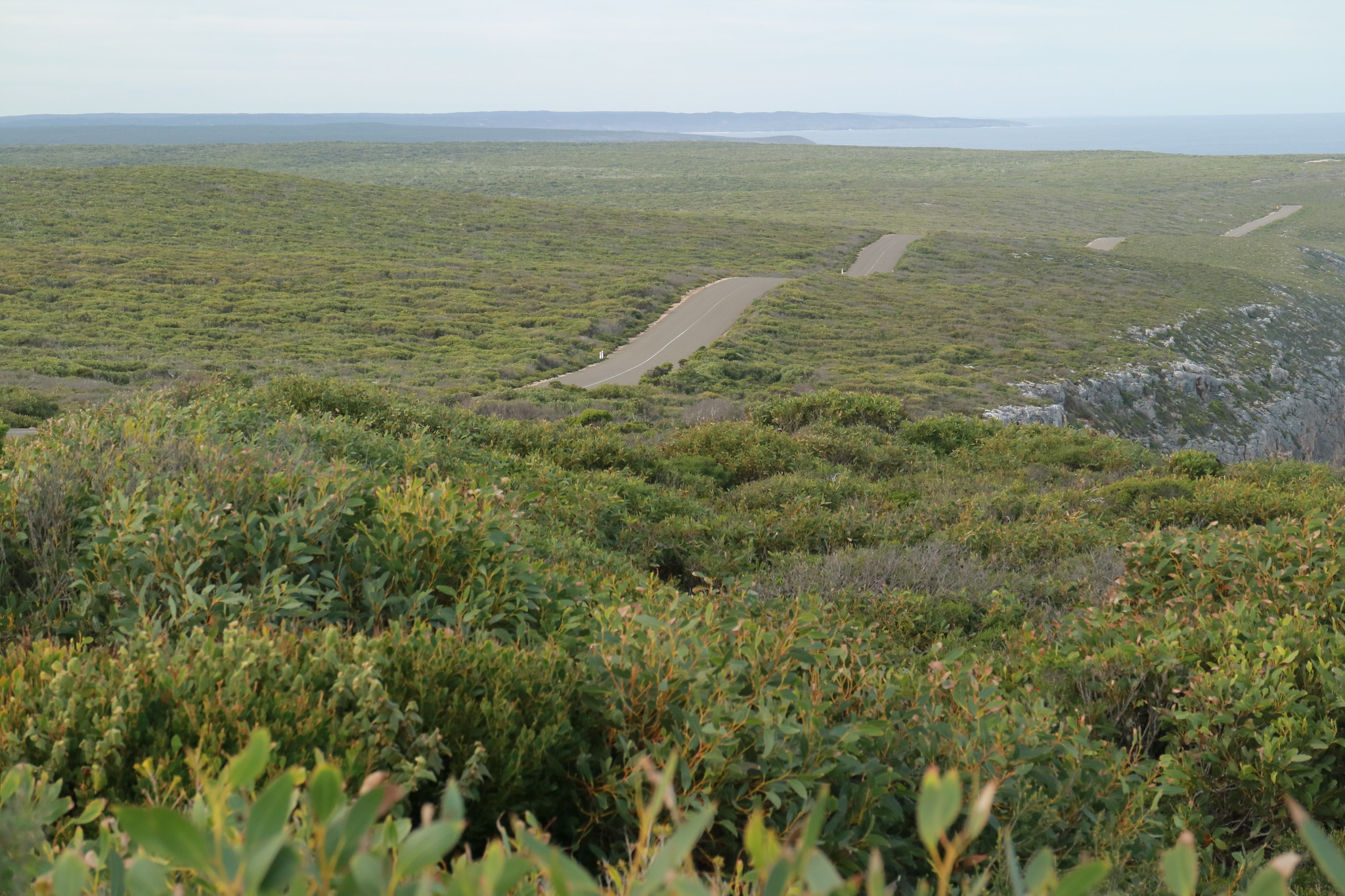 But entwined within this verdure of shrubs and bushes, were ghostly remnants of trees which were apparently not welcome in this enigmatic habitat. 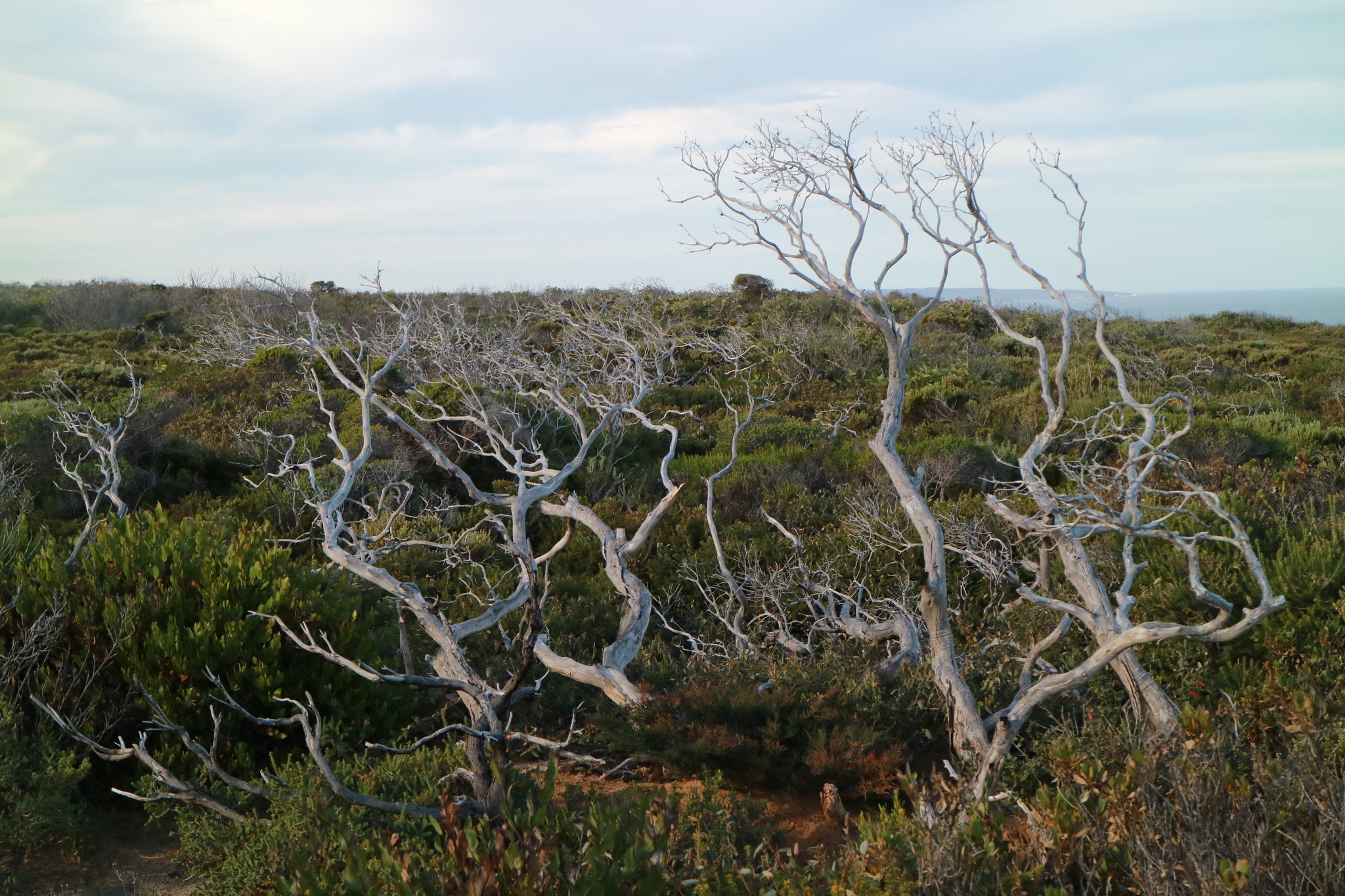 As our schedule was really tight, we headed straight for Remarkable Rocks – natural rock formations shaped by aeons of weathering from wind and water. Strange things happen at the tip of this continent. Nature is such a consummate sculptor and man the craven dreamer, when he had nothing productive to do, must have seen strange creatures frozen on a platform, wondering who had put them there. 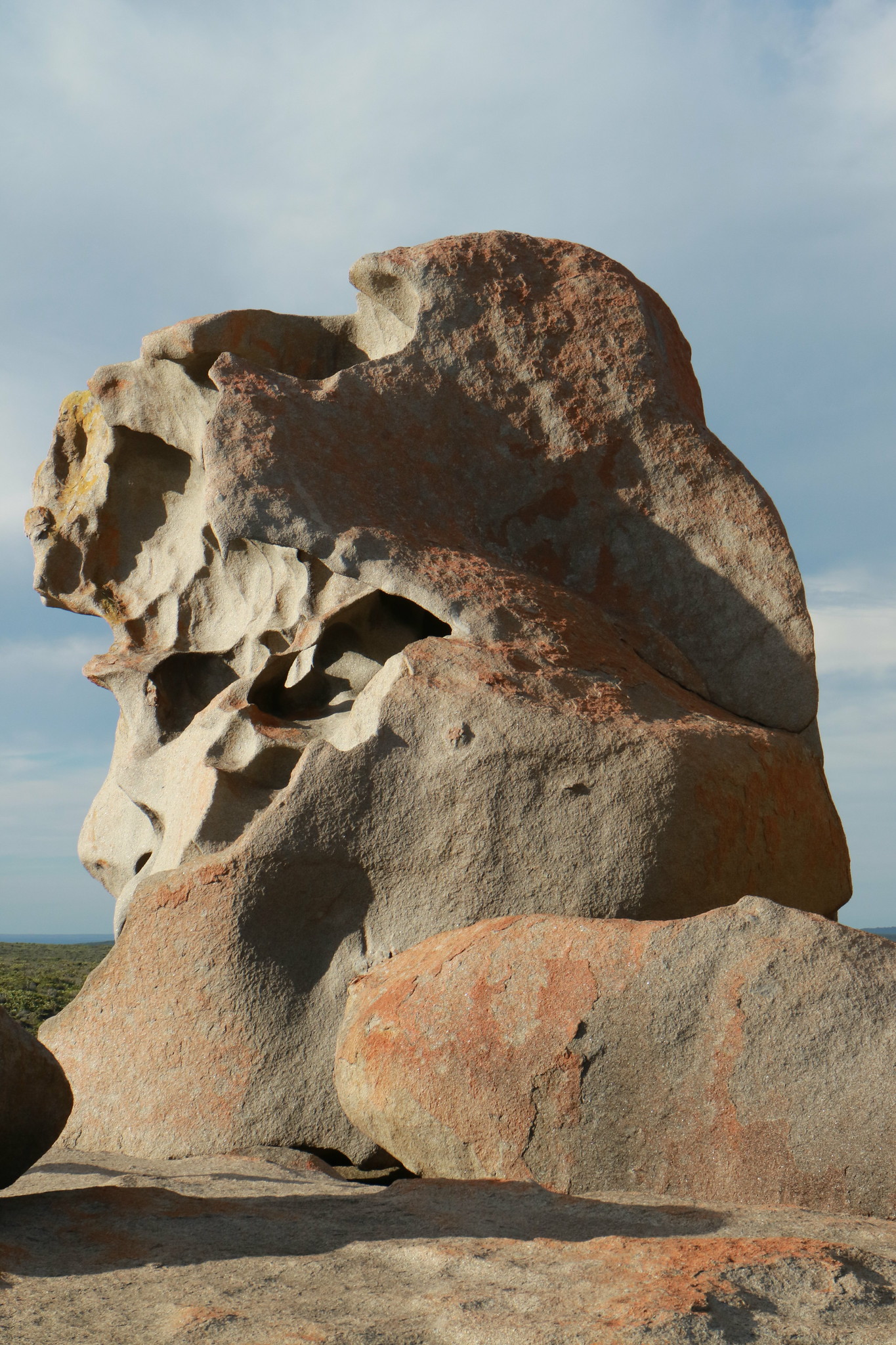 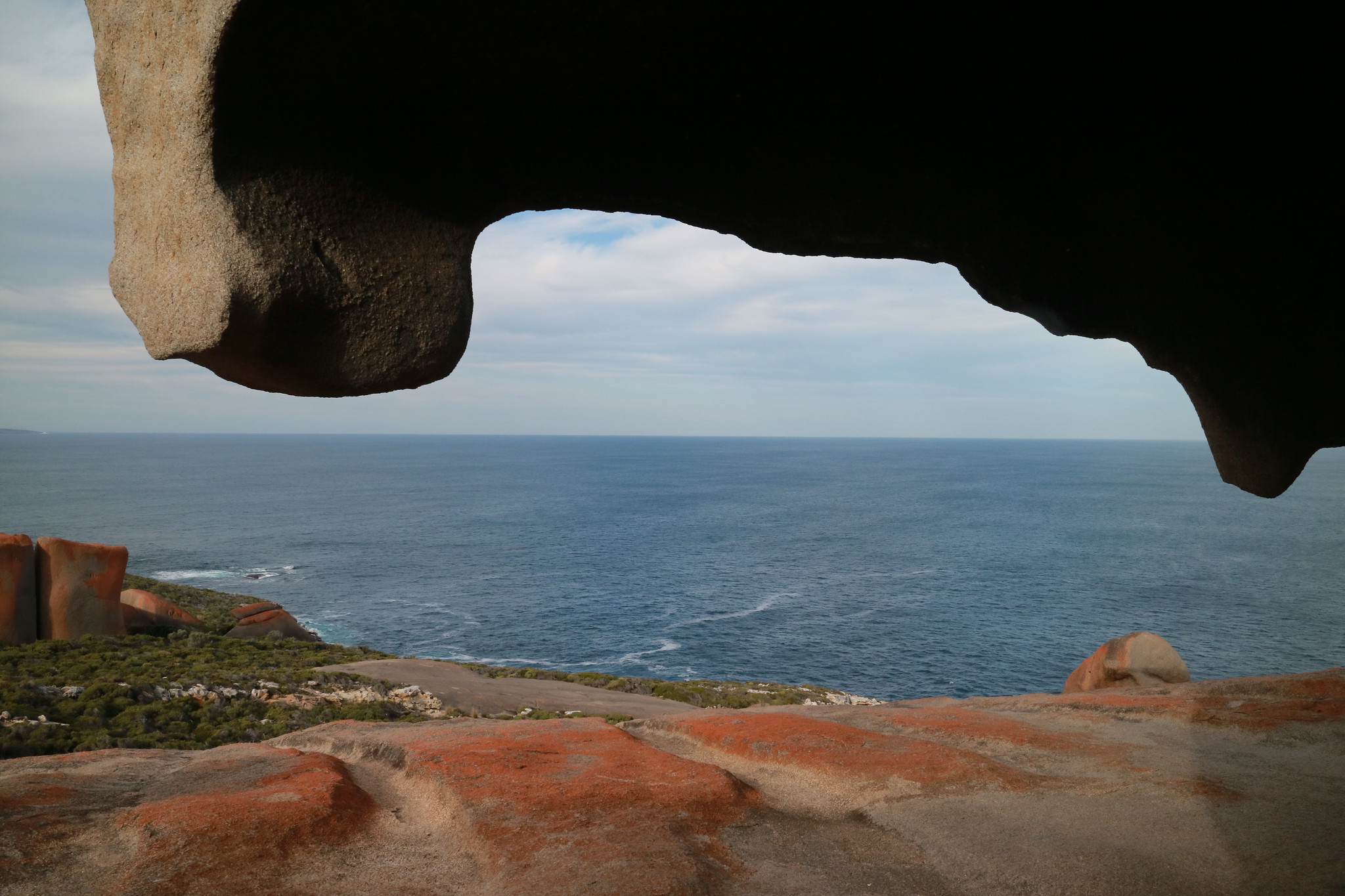 Could some ancient civilisation have treated this as an altar and worshipped the sculptures? Having nothing very productive to do ourselves, we ventured onto this platform and even without imagining the strange creatures, the commanding view of the ocean beneath our feet and the strong blast of the ocean’s breath, brought on an immense feeling of space and freedom. 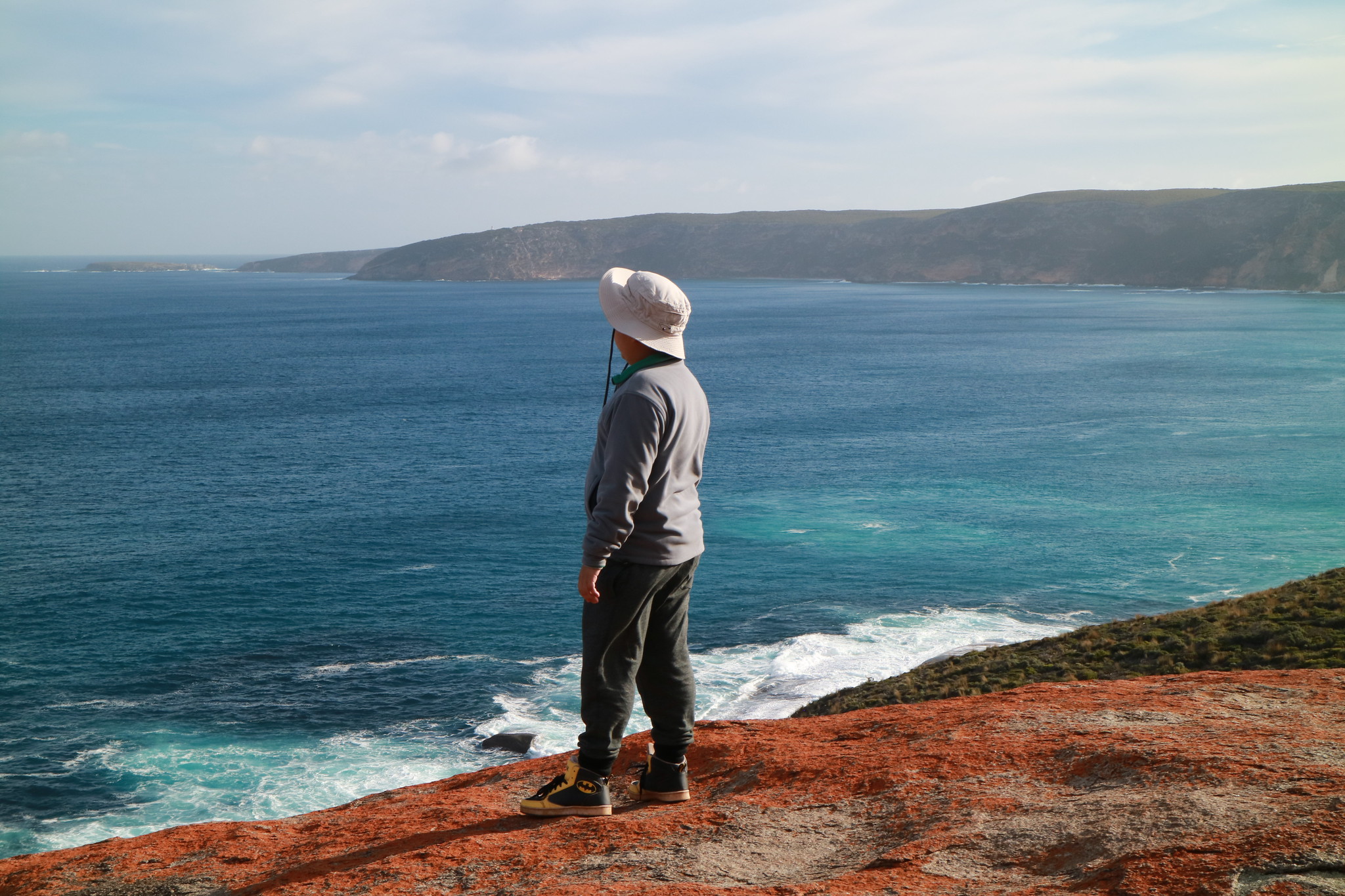 Michael warned us to be careful and not to wander too close to the line marking out the danger area. A few careless souls had crossed the line and ended up as sacrificial offerings to the ocean. 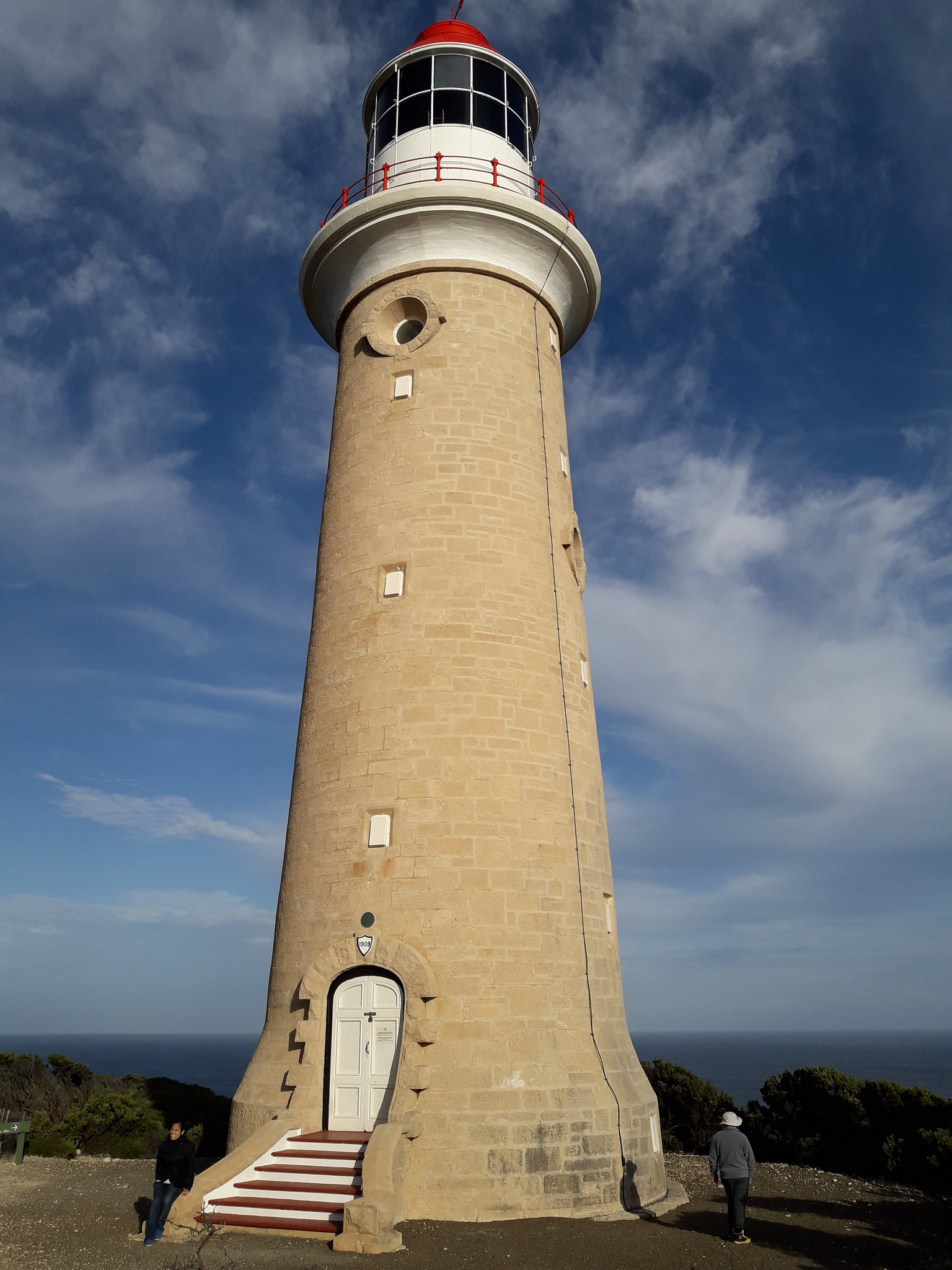 The next destination was a lighthouse situated near another popular site, Admiral’s Arch. It’s called Cape du Couedic Lighthouse and apparently, you can book accommodations there. A wooden path and stairs led the way to the ocean and there was the famous rock formation, Admiral’s Arch. 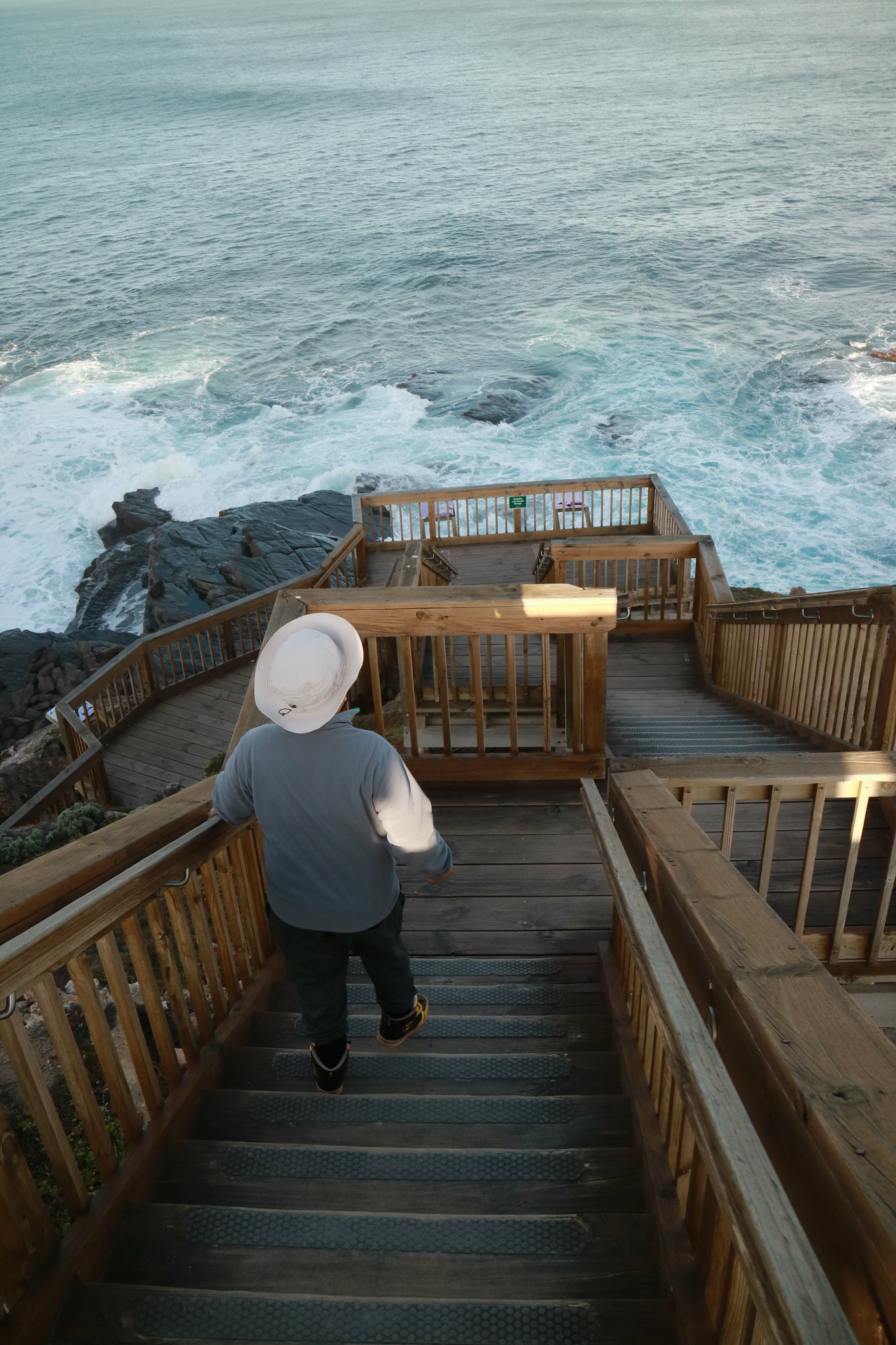 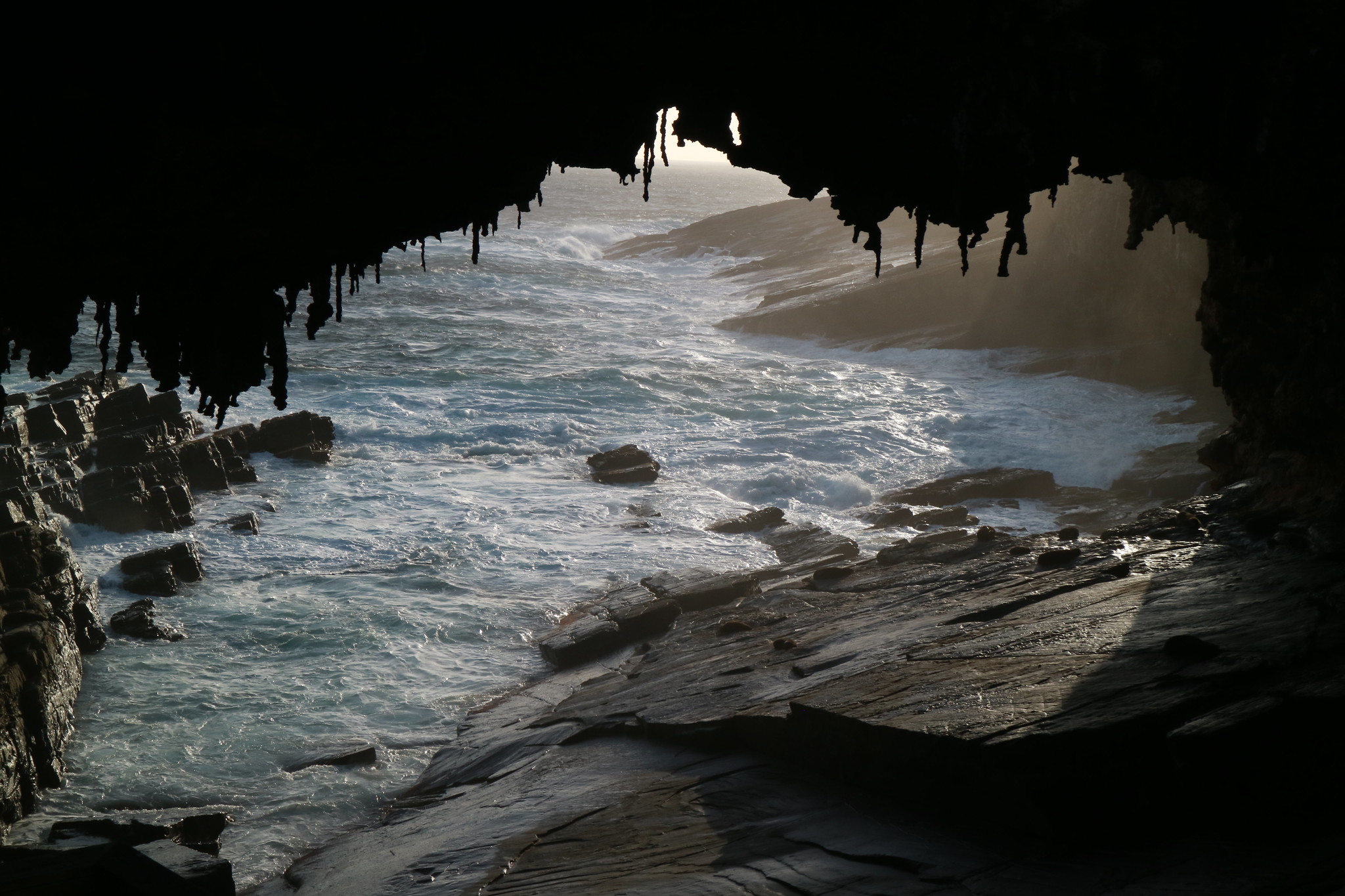 It was a window or doorway to another part of the heavily pummeled coastline. I wasn’t terribly interested in watching seals in repose, but apparently, these guys were immigrants, oblivious to the force and fury of the waves beneath their flippers. 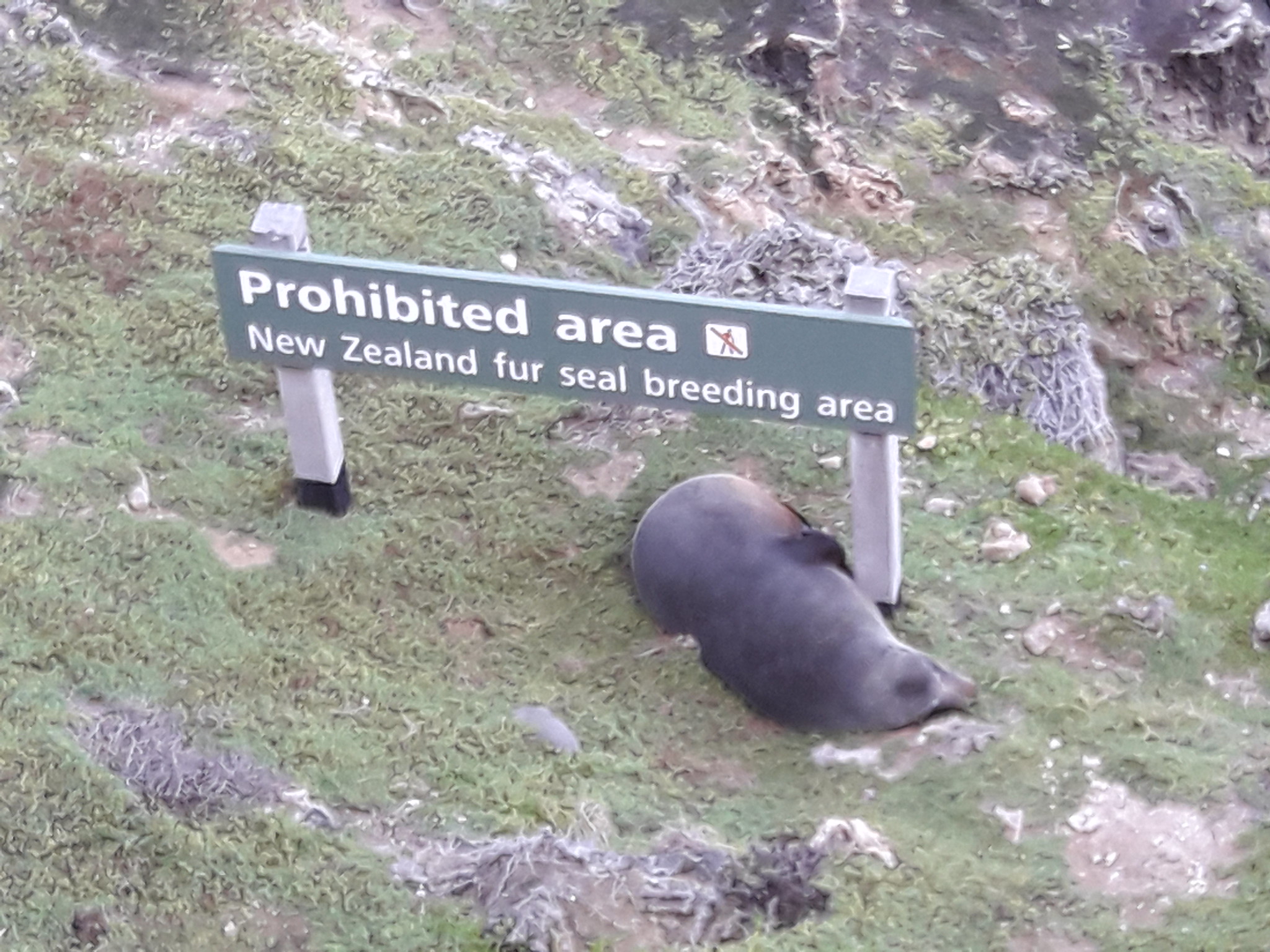 We couldn’t lie next to the seals, but many of the old folks here looked like they could sit on the rocks all day and watch nature’s eternal feud – the ocean unleashing its fury on the rocks and the rocks stubbornly holding their positions – like eternally battered husbands. Only on a peaceful shore can one imagine rock formations to be women awaiting their lovers’ return. 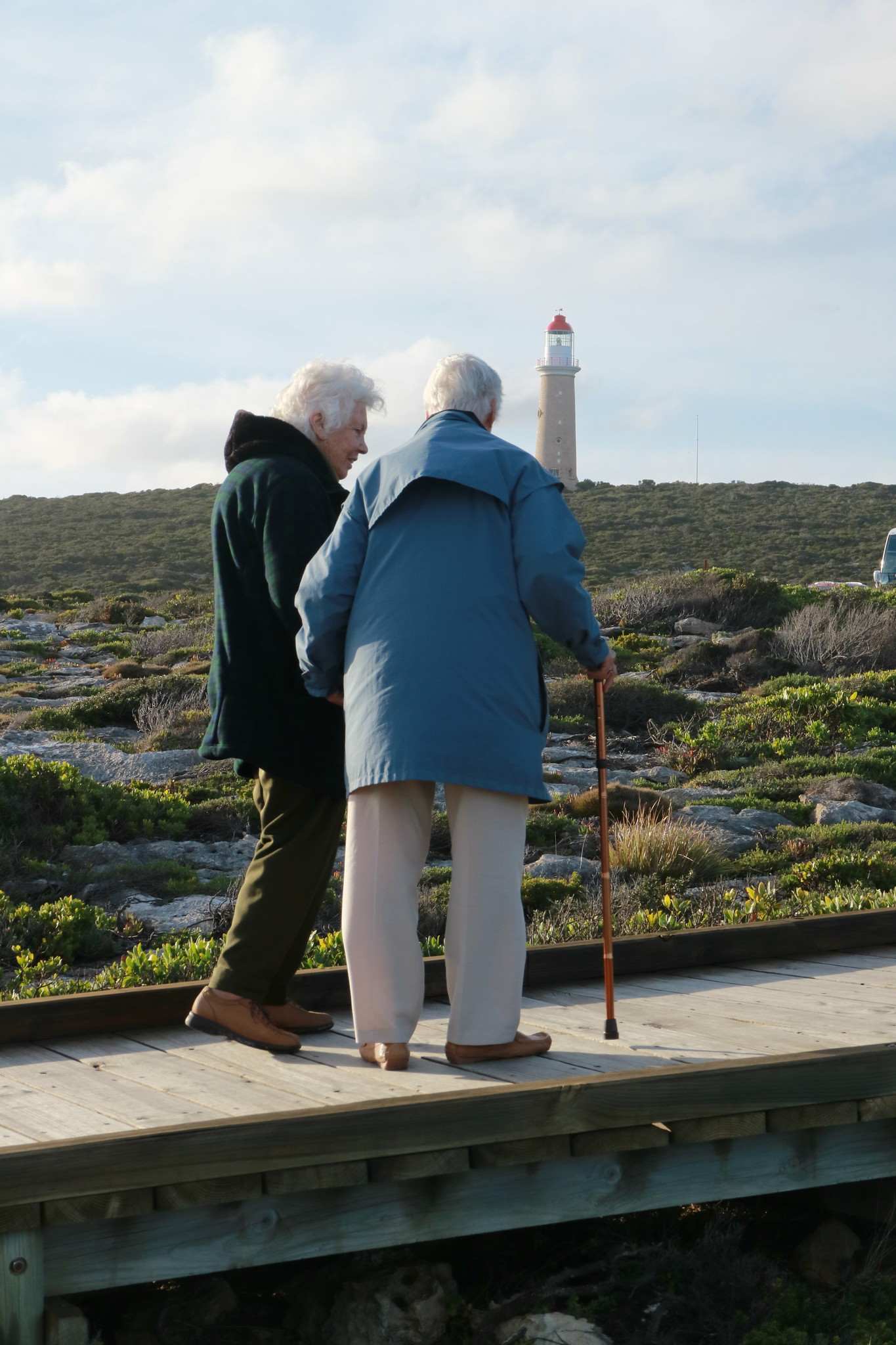 It was a long and exhausting ride back to Pennyshaw. The sun had set and the last light of day lingered on the clouds, creating the illusion of soaring peaks of Himalayan proportions. We said goodbye to Michael and waited in the crowded passenger’s lounge before we sailed back to Adelaide on the last ferry of the day.