At first, the Buddha intended to keep his Enlightenment to himself, but the Hindu deity Brahma Sahampati was said to have pleaded with him to teach the world. There was agood reason for the Buddha’s reluctance to teach. He realised that the Dhamma (key concepts of Buddhism) is complicated and difficult to understand. He went around 7 places over 7 weeks in search of individuals who might understanding the Dhamma, but found no one who might be able to grasp the finer point.

Then he thought of the disciples who practised self mortification with him. Though they abandoned him when he gave up his practice of asceticism, he was sure that few other practitioners would be able to fully comprehend the teachings of the Dhamma. If it’s anybody at all, it would have to be them.

He made his journey to Varanasi, in hope of finding the 5 ascetics Kondanna, Vappa, Bhaddya, Mahanama and Assaji. As luck would have it, he ran into them at a place called Isipatana (present day Sarnath) 2 months after Vesak Day. The 5 ascetics tried to ignore him at first, but when he started teaching, they started debating. Soon, they were just listening and politely questioning.

The Buddha delivered his first sermon. Within 5 days, he converted them all. 55 other men came to listen to the Buddha. The Buddha delivered his second sermon. They all attained arahantship, a state of Enlightenment. The Buddha’s 60 enlightened disciples put on their saffron robes and were dispatched in different directions to teach the Dhamma. Thus began the Sangha or order of monks. Ordained as monks, men would study Buddhism and work their way towards Enlightenment. Centuries later, the monkhood would evolve and come with different requirements, purposes and objectives.

When Emperor Ashoka converted to Buddhism, he went on a pilgrimage, marking all the holy sites with inscribed pillars and later built temples at these locations. The former Isipatana must have been a forest of temples and stupas where monks chanted and meditated.

Today, the Dhamek Stupa is the only relatively intact structure left at the former Isipatana. It is a cylindrical structure 28.5m in diameter at the base and 43.6m tall. Pilgrims often encircle this stupa, but it is probably not the actual site where the first sermon was delivered. 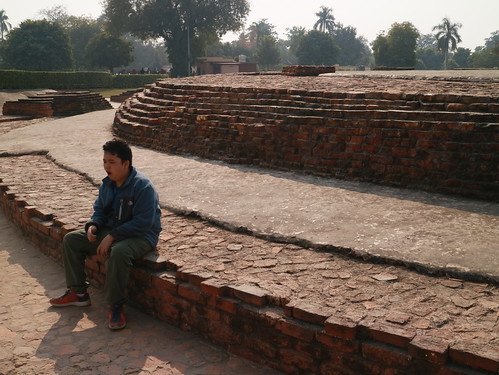 Burmese scholars believe that the actual site for the Buddha’s first sermon was in fact the Dhamarajika stupa which has been almost razed to the ground by Muslim conquerors. Judging from the base, it was 13.4m in diameter. There is no record of its original height, but records dated 1794 indicated that Jagat Singh, then minister of Varanasi, dismantled the Dhamarajika stupa to save money on bricks on a construction project in Varanasi.

During the dismantling, he discovered a marble casket containing human relics. He threw them into the Ganges River and continued to dismantle the structure for bricks. In 1815, an excavation project was initiated under the command of the British East India Company’s Colonel Colin Mackenzie.

Unfortunately, many of the excavated relics and bricks were stolen. Further excavations right up to 1922 uncovered the Dhamek Stupa, the base of the Dhamarajika Stupa, a sunken shrine Pancayatana and the badly damaged Ashoka pillar, the most concrete piece of evidence that this was indeed Isipatana.

Just 10km from Varanasi, the town of Sarnath is just a short taxi ride from downtown Varanasi. After weaving through the noisy, chaotic streets with cows and pigs frolicking in the rubbish heaps, one arrives at a quieter, less congested suburban area with clusters of small hotels, guesthouses, convenience stores and cafes catering to foreign pilgrims. The area of interest to the pilgrim is quite manageable. The taxi will bring you to the ticket counters just outside the museum. There may be a queue if a tour bus has just arrived. You pay for tickets to both sites here. Departing from the ticketing area, the archeological site is on the left while the museum is on the right.

I suggest seeing the archaeological site first. You may feel sad about the ruins, but the Buddha had always taught that nothing is permanent. Being present at ancient Isipatana does not earn you any merit. It’s an inspiring place, but it’s what you do after seeing these ruins that count. If not for the Khamapa’s presence and his accompanying entourage that day, it could have been a quiet afternoon.

Like Ayuthaya, the ruins at Sarnath look like ghostly images of a glorious past. I can’t imagine what ancient Isipatana looked like without a reenactment. It would be good if we could have an artist’s impression what it might have looked like. Something like what we see in Delphi for instance.

Buddhist philosophy was first articulated in India. It became an equalising force in class and caste conscious Indian society. Ironically, it arose from an awakening of someone in the elite class. The counter intuitive nature of Buddhist philosophy makes its existence and survival improbable. It goes against the gravity of human desire and selfishness. It requires great effort and discipline to practice. One gets despised for “lack of ambition”. One gets pronounced “insane” by virtue of his spartan and seemingly masochistic ways.

Defying the conventional “wisdom” of self fulfillment with disregard or even at the expense of others, one of the greatest rulers of India, Emperor Ashoka understood and vigorously promoted Buddhist philosophy to make the Mauryan Empire a more caring and compassionate one.

All that came to waste with Buddhism being virtually obliterated by Islam and Hinduism in his absence. Only in Sri Lanka did it take root. Today, less than 1% of Indians are Buddhists. Buddhism became a coin that had bounced back from impervious the wall around human nature. India will be India. It may stick for a while with another awakening in the elite class, but it will never stick for long.

Walking back on the road to Varanasi, there is a Thai temple, a very modern cafe and the impressive but oddly-shaped Chaukandi Stupa with a suspiciously new octagonal top. The stupa either marks the spot or commemorates the Buddha’s chance reunion with his 5 ex-disciples who had earlier abandoned him at Dungeshwari.

Perhaps just as worth visiting as the historical sites, is the Archaeological Museum (once you’ve gotten past the rude and grouchy staff at the entrance). Unlike the pathetic exhibits at Bodhgaya, there are some very interesting and informative exhibits here, most dating from the Gupta era. The best way to approach these exhibits is from the perspective of a non-believer with an open mind. You take away all the incense and chanting, all the monks and devotees. Examine the exhibits, read the descriptions and learn about the history and process of discovery that Siddharta Gautama went through. This is the Dhamma that he had come to realise. These are the foundations of his teachings and philosophies minus all the rituals and offerings. This is what counts.

The self-effacing, counter intuitive nature of Buddhism makes it extremely difficult to explain and accept especially in a society where success, material wealth and achievements and victories over others are trumpeted louder than anything else. As to how the Buddha managed to change the minds of 5 former disciples who had abandoned him, we will never know. The Dhamma is such. If you see it, you would want to receive it. If you don’t, it’s OK to just leave it.