Located by the bank of the Neranjara River, Bodhgaya was where the Buddha attained Enlightenment, but the path he took was full of stumbles and pitfalls. Before he discovered the Middle Path, he had spent 6 years in a cave at Dhongra Hill, practising extreme asceticism and self-mortification, believing that these practices would lead him to Nirvana

Realising that he would die without attaining Enlightening if he went on, he gave up those practices and started accepting food again. His followers thought that he had succumbed to temptation and left him.

Confidently, he walked to Bodhgaya, sat under a bodhi tree and vowed never to leave the seat until he had attained Enlightenment. Then, on the night of a full moon (Vesak Day 588AD), he attained Supreme Enlightenment to become a Buddha. Around 300 BC, Emperor Ashoka built a shrine to commemorate the Buddha’s enlightenment. Legend had it that Ashoka, who was originally a Hindu, had the bodhi tree cut down. After converting to Buddhism, he tried to revive the stump and built a 3m wall around it. 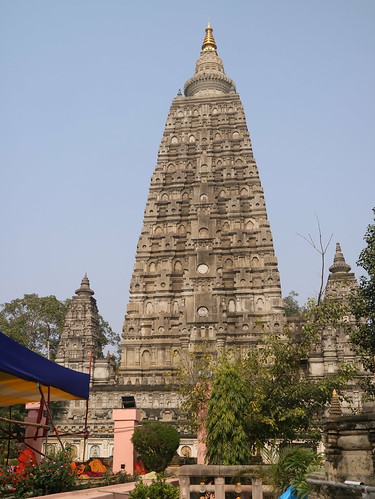 After the fall of Ashoka’s Mauryan Empire, two Sunga queens expanded on Ashoka’s shrine. The final stage of construction for the Mahabodi Temple was undertaken by a king of the Huviska period around 200 AD. After a renovation project which took place around 700 AD, the temple was largely neglected. During the 12th century CE, Bodh Gaya and the nearby regions were invaded by Muslim Turk armies. During this period, the Mahabodhi Temple fell into disrepair and was largely abandoned. 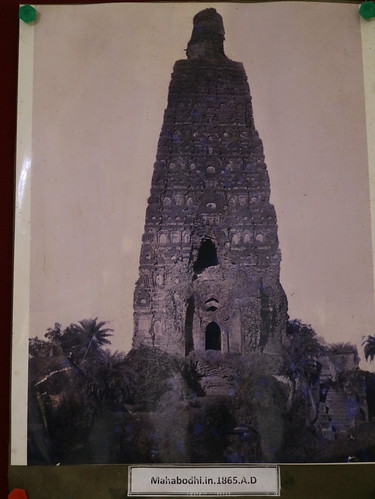 This was the sorry state that the temple was in during the 9th century. The photo was taken in 1865, circulated to Buddhists all over the world, seeking donations. In the 1880s, the then-British colonial government of India began to restore Mahabodhi Temple under the direction of British army engineer Sir Alexander Cunningham and his assistant Joseph David Beglar.

On 7 July 2013 a series of ten bombs exploded in and around the Mahabodhi Temple complex. Five people, including two Buddhist monks, were injured by the blasts. Investigations revealed that the Indian Mujahideen was responsible. Security at Bodhgaya has been beefed up since then. Not only are there armed guards inside the compound, visitors had to undergo through security screening. No bags and mobile phones are allowed. If you wish to take photos, you better bring a camera. MP3s radios and other audio gadgets are also not allowed. That’s because folks who have smuggled these devices inside have used them to play Islamic prayers.

Such measures are not foolproof as there is a Muslim cemetery just next door and when I was there, there were people playing prayers with the intention of annoying the Buddhists.

UNESCO has described the temple in amazing detail here. There’s a mind-blowing amount of detail there. Strictly for scholarly pursuits only. Perhaps the most succinctly educational part of the temple complex are these murals depicting the life and path of enlightenment of the Buddha. They are clear and very easy to understand.

All around the pagoda, are devotees of all nationalities sitting on mats of every make, ostensibly seeking Enlightenment, but I would question how conducive this place is towards that goal, being so crowded and even a bit noisy. As a place to think or meditate, I find Sarnath a lot more peaceful. Never mind that it’s less “holy”.

To me, Bodhgaya has become commercialised. Nothing wrong with development, but some pilgrims have begun to take the place a little too seriously. The significance of these sites lie purely in their being able to mark a spot on the planet where the history of Buddhism was made. Beyond that, merely visiting these places and touching this and that (or taking selfies) can grant the pilgrim no merit at all. It’s what one does after the pilgrimage that carries weight. 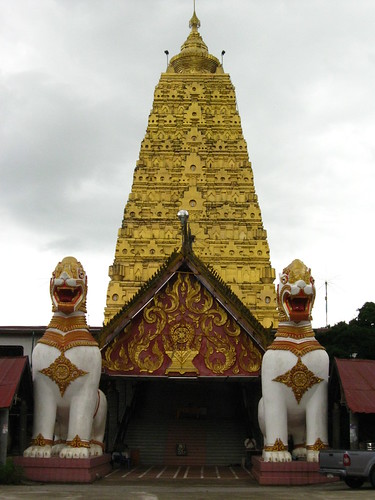 And the Mahabodi Temple also has a replica. It’s the Chedi Bodhgaya in Sangklaburi, Thailand. Understandably, the replica gets far fewer devotees than the real thing. But when all is said and done, they are just structures. Neither can grant you super powers or a shortcut to Enlightenment. Sadly, many Buddhists fail to understand that. Another subject of significance lies in the compound of the Mahabodhi Temple. It’s the Mahabodhi tree.

It should be noted that the original tree has been mutilated or destroyed many times. The one standing today is a relatively young offspring brought over from Sri Lanka which was in turn transplanted there from a cutting of the “original” tree, brought there by Emperor Ashoka’s daughter Sanghamitta. 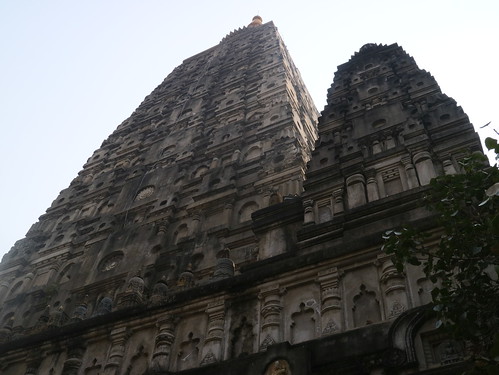 Again, there is no magical power under the tree, just a lot of pilgrims jostling for space to take selfies, repeating the shots until the most appropriately contemplative mood is captured. And after the moment was captured, these affluent pilgrims would return to their luxurious hotels, away from the real world, a world into which Siddharta Gautama immersed himself after he escaped from his palace to gain insight into the meaning of birth, aging, sickness and death. Bodhgaya and its well-heeled pilgrims have their fair share of ironies. The Thai concept of tham boon or making merit, is more symbolic than effectual. One person I know, who had undoubtedly gained a lot of merit before she died was not even a Buddhist. 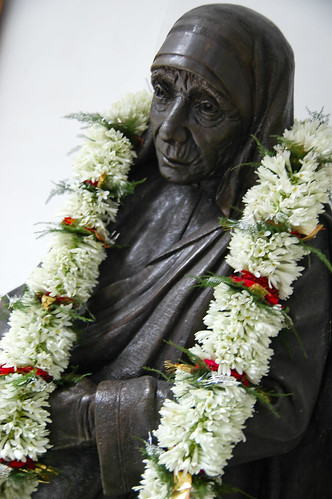 Bodhgaya lacks the atmosphere of Lumbini, that feeling of universality; with no French or German temples, but there are still quite a few noteworthy temples built by devotees from Myanmar, Bhutan, Bangladesh, Mongolia, Thailand and the Giant Buddha statue 80 feet in height inside Daijokyo Buddhist Temple (Japanese). The most visited structure here other than the Mahabodhi Temple, is the Giant Buddha statue. With the crowds, come the touts. There is a horse and a camel outside for you to take pictures with. I didn’t ask how much they charged.

One of the least visited and most surprisingly beautiful temple at Bodhgaya is the Cambodian Monastery (last 4 images in the above gallery). It is so characteristically Tibetan that I had to check Google Maps several times to be sure that it’s Cambodian.