Varanasi, a city as old as time

Continuously inhabited since the 11th century BC, Varanasi has been described as a city as old as time. But unlike the ghostly ancient cities in Greece and Rome, Varanasi is still living, aging and attracting pilgrims. Situated on the bank of the sacred Ganges River, Varanasi has always been a religious hub and the holiest Hindu city. Devotees believe that Varanasi is the city of Lord Shiva, who walked here with his wife Parvati at the beginning of time.

Varanasi is also believed to be the battlefield where the god Krishna set fire to his imposter. Lord Rama was also said to have come to do penance after slaying the demon Ravana. For me, the gods and demons failed to materialise. On my part, I also fail to visualise them. That’s because the Varanasi I see today is so down to earth and so close to all the vagaries and realities of life as I know it. It is as beautiful as it is filthy. It is spiritual and yet throbbing with commerce and material concerns.

During the Mauryan era under Emperor Ashoka, Varanasi was connected by a road starting from Taxila in present-day Pakistan and ending at Pataliputra (present day Patna). It was a remarkable conduit for the two major Buddhist learning centres in Taxila and Nalanda. Over time, a hive of spiritual and commercial activity had evolved along the holy river. Hindu pilgrims believed (and still believe) that death at Varanasi breaks the cycle of rebirth. Meeting this demand, are scores of residences which cater to dying Hindu devotees, not just from all parts of India but every corner of the world. These are no 5-star accommodations for those awaiting death and conditions can be pretty squalid. The majority of the lodgers are old, sick and destitute. Coming here to take their last breath brings much mental and spiritual comfort to these suffering beings. 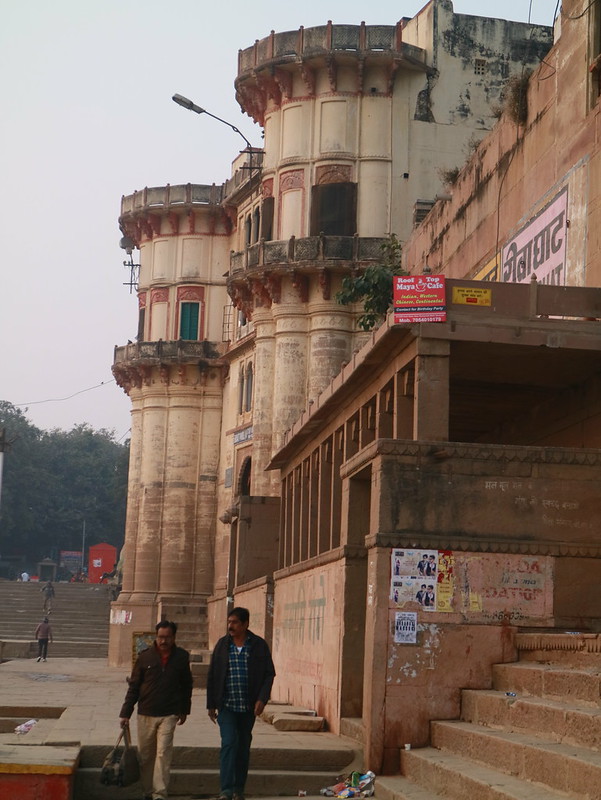 Buddhist scriptures, the Jataka Tales also refer to Varanasi as a prosperous city called Jitwari, not far from Sarnath, the place where the Buddha delivered his first sermon. While it is unlikely that you will cross paths with any of the gods or demons at Varanasi, you are certain to absorb the beat and breath of this naturally scenic and idiosyncratic settlement.

A ghat is simply a row of steps descending to the river from the end of the road. They look a bit like the steps we have at Boat Quay and Clarke Quay in Singapore, but with the river below street level, the original purpose of the ghats at Varanasi was to facilitate pilgrims who wished to perform puja on the Ganges regardless of time or tide. Hence, each riverside temple or castle is like a beach resort with a ghat for its own devotees.

As the street is quite high above the river, the Ganges would only claim the ghats during the wettest months of the year. At most other times, the steps are dry. I started my trip with my 16-year-old from Assi Ghat (pronounced “gart”). It is the southernmost ghat and a sensible place to begin our walk along the ghats, ending at Dashashwamegh Ghat, the most happening place on this side of the river being close to Kashi Vishwanath (Lord of the Universe) Temple, the most holy temple in India dedicated to Lord Shiva. 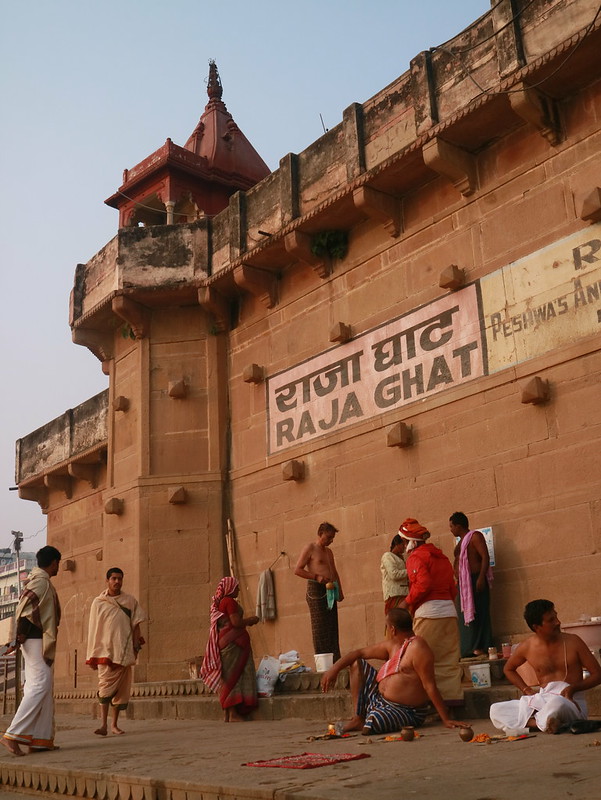 It spite of its holiness, this temple is not that old. That’s because the original was destroyed and re-constructed a number of times in history. The last time it was totally demolished was during the reign of Aurangzeb (not possible when liberal Emperor Akbar was in power). The fundamentalist 6th Mughal emperor then constructed the Gyanvapi Mosque on its site. The mosque was later destroyed and the Hindu temple rebuilt after the Mughals lost power, but the tussle between the two main religions in India did not end there. As recent as 7th December 2010, the Dashashwamegh Ghat was bombed by the Indian Mujahideen. The incident killed one and injured 38. Security at the temple has been tightened these days. Entering Vishwanath can be quite a hassle and not being Hindu, I decided to give it a pass.

It was a chilly morning in Varanasi in December 2018. The streets were still grey and gloomy and the city was just waking up as we emerged from our hotel at Big Bazaar Road. A tuk tuk we hailed off the main street brought us to our destination and the drop off point was just a short walk from the expansive riverside which opened up like a beach before us.

Perhaps because the touts were still asleep, we had a rare moment of tranquil commercial inactivity. The yoga class held at the square leading to Assi Ghat reminded me of the old folks practising “qigong” in the parks here in Singapore, except that the folks here were much younger, with a lot of activities in their lives apart from work.

Further down, at almost every ghat, you will see pilgrims braving the cold to bathe in the river while rubbish, like abandoned children of unknown origin, take a free ride downstream. One ghat joins another, each with its own identity, be it a temple or a castle, each has its own pattern of steps, abutting without blending in, following the curvature of the river like a segmented creature. 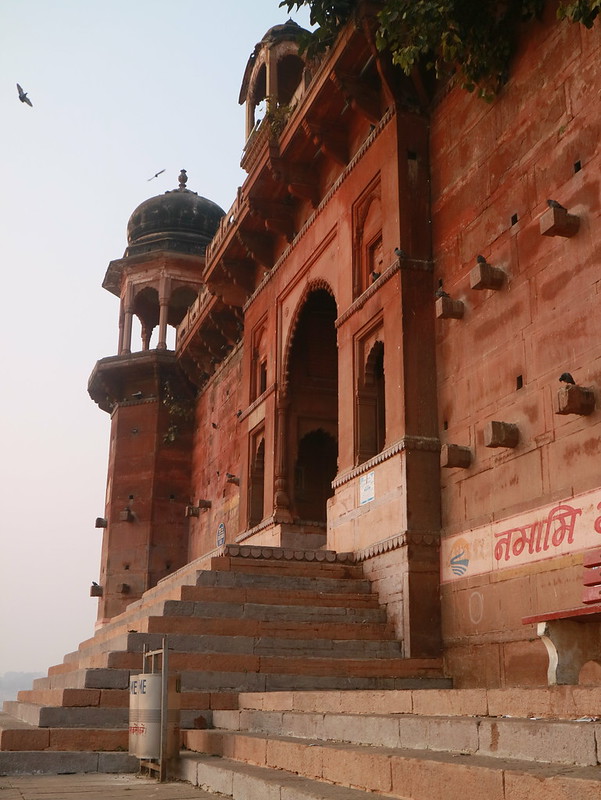 The season and the timing could be the reason for the delightful calm. It suited us just fine. The unoccupied boats docked at the ghat, the occupied ones sailing along the river with flocks of birds chirruping around under the warming glow of the rising sun … it was charming picture. With a slight detour from the spiritual world, you will not fail to see the dhobi ghats – where laundry men beat the shit out of bed sheets (not literally I hope), blessing them with water of the holy Ganges, not necessarily appreciated by the impious hotel guests.

Indeed, Varanasi confuses the mind of the impious. We lost our sense of what is fragrant and what is pungent, what is clean and what is filthy, what is pleasant and what is obnoxious, what is safe, what is dangerous. And within the tumultuous crowds which were starting to swell as stalls unveiled their produce and products when we reached Dashashwamegh, we even began to lose our sense of direction and purpose as well. What were we doing here? There was a lot to admire and appreciate, yet there was nothing really worth admiring and appreciating. Varanasi draws you, then pushes you aside. With so many images and activities compressed into one moment, it was just one contemplative moment. I’ve been there, I’ve done it. I have no desire to look back.

On the walking street that leads out of Dashashwamegh Ghat, we could have been easily knocked down by a motorbike. This being India, it’s difficult to fathom why it was a walking street that allowed motorbikes to ply, just as we had no idea what a holy bin was meant for.

Presently, a tuk tuk driver approached us and after settling on the price, he led us through the crowds to his parked vehicle. I’m not sure if I want to come here during the final days of my life. It may take a thousand years to figure out what this city is all about. Or perhaps, all this thinking or figuring are not really necessary. We may not have a choice to die in a way or place we wish, but we can certainly choose how we want to live.