Kyrgyz people have often been described as Japanese-looking people who speak Russian. But exactly, what kind of people are they? Well, it depends on which anthropologist you ask. My favourite theory is that they were Turkic people who settled down in western Mongolia. They grew to become a powerful tribe after forming an alliance with China under Tang Dynasty Emperor Li Heng who married his sister, Princess Taihe to a Kyrgyz khan. When the Uyghur khanate tried to kidnap Princess Taihe, the combined forces of the Tang and Kyrgyz army destroyed the Uyghurs.

With one rival weakened, the Kyrgyz tribe flourished until the Chinese empire went into decline and the Mongols started seizing land from the Kyrgyz. They were pushed out of Mongolia and settled down in present-day Kyrgyzstan with cities like Osh, Naryn, and Issyk Kul on the Silk Road.

Genetically, we may say that the Kyrgyz people are Eurasians, a mixture of Turkic and Mongol heritage similar to that of the early Mughal people. Like the Mughals, Kyrgyz people are mostly Muslims. 90% of the country’s population were followers of Islam, though some say that less than 60% actually practise Islam. Nevertheless, Kyrgyz people are mostly liberal, vodka-drinking Muslims and the government of the state remains secular. In terms of facial appearance, Kyrgyz people do look a lot like Northeast Asians. However, in terms of body size, they are more like Caucasians. The “jigit” here look like Mongolian wrestlers.

After checking out the mountains and alpine lakes, I thought it would be nice to spend just a couple of days in Bishkek to check out the buildings, the food and the lifestyle of the city folks.

Situated in the foothills of the Ala Too Range, Bishkek is both the largest city and the administrative capital of Kyrgyzstan. Under Soviet rule, Bishkek was renamed Frunze after Russian Bolshevik leader Mikhail Frunze. The city was renamed Bishkek after independence. Even though Kyrgyzstan is considered a poor country, Bishkek is a city with classy cafes, upmarket restaurants and shopping malls and supermarkets with ringing cash registers. It also exudes the simple charm of vast imposing squares and restful parks. Long walks around Ala Too Square can be enjoyed as long as one’s mind does not dwell too much on the exceptional times of political turmoil and racial strife. 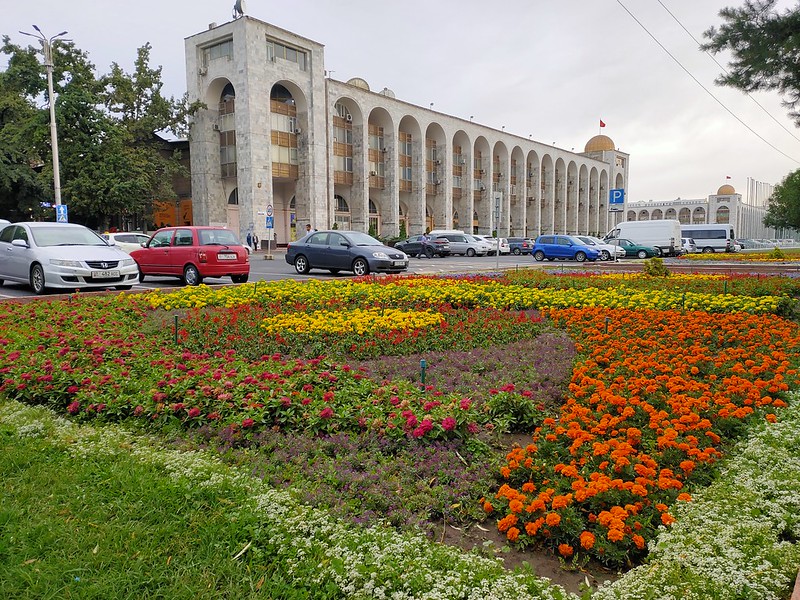 It was sweltering when I arrived in Bishkek from Kochkor. As usual, the least nice people in any country are almost always the taxi drivers and immigration officers. Crass and haughty, I was glad that my ride in his taxi was over. I checked into a hotel where you may have to wait for the receptionist while she’s doing the laundry. That said, it’s pleasantly informal with the majority of the guests being Russians. As it was late and I was famished, I checked out one of the nearest restaurants around. It’s a Chinese restaurant and I had a plate of delicious mutton lagman which convinced me to become a regular customer. 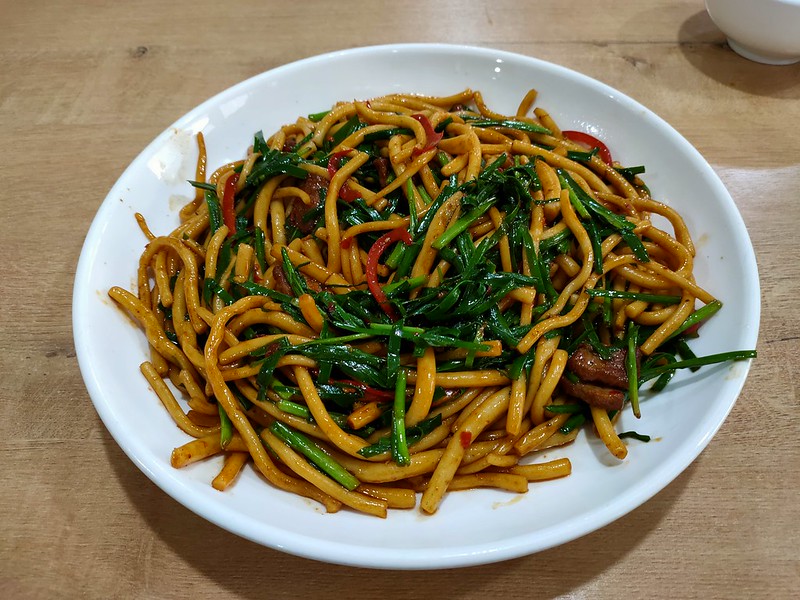 After dinner, I went to a small convenience store to get some snacks and beer. That was when I met my first really rude “Kyrgyz” person. It’s the shopkeeper and he actually looked more Russian. I went back to sleep it off and the next morning, I headed off to Ala Too Square. It’s summer. It’s hot. The flowers were blooming and frying under a cloudless sky. The fountains came on at 10.00am. Russian children danced around them. Like a homeless guy, I curled up on a park bench to watch the world go by. This was a real holiday – not rushing from one destination to the next. 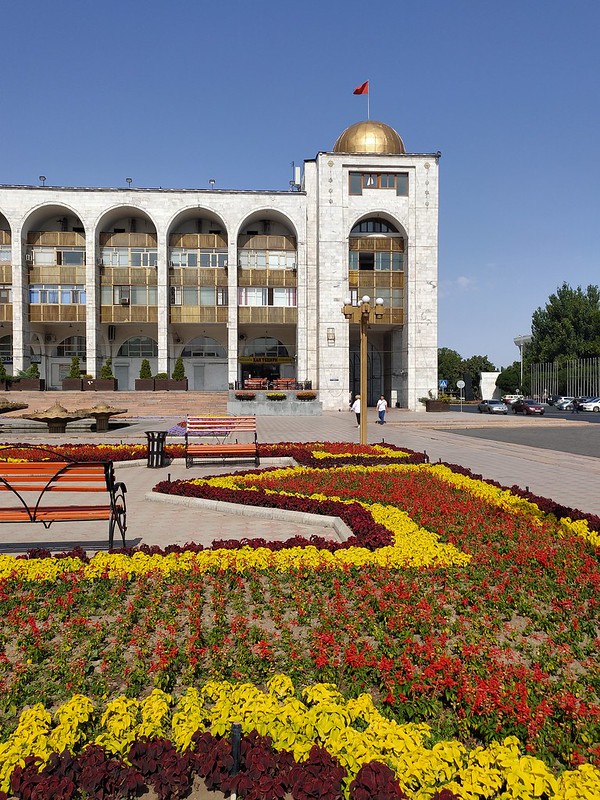 I pointed my camera across the square. High up on a pedestal, was the legendary Kyrgyz hero, Manas who replaced Vladimir Lenin after independence. From the names of the roads, one can learn a lot about both Kyrgyz culture and Soviet history. Kyrgyzstan’s most celebrated author Chinghiz Aitmatov (1928-2008) has a statue here. He wrote in Russian, was half Tartar and had an interesting Mongolian name. Aitmatov also happened to be a close friend and adviser to the last president of the Soviet Union, Mikhail Gorbachev (1931-2022). 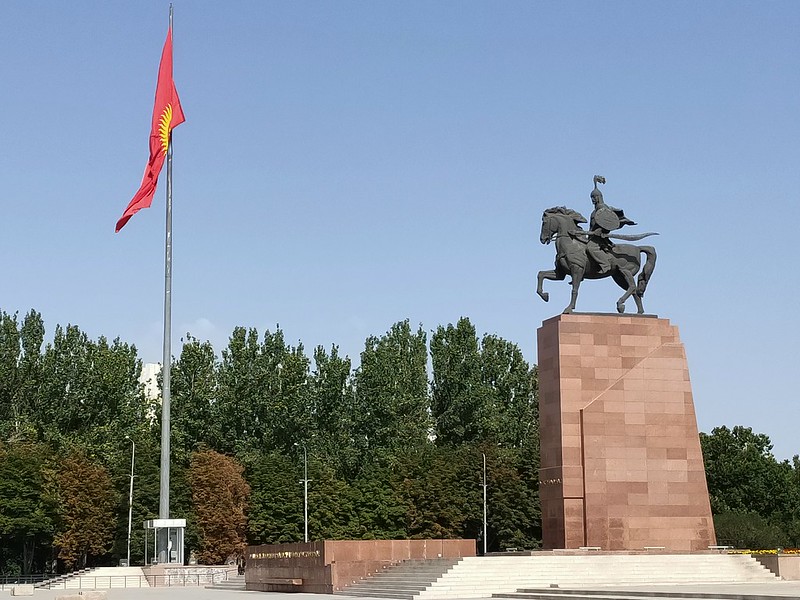 The fact that a writer can have a statue at the city square right in front of the Kyrgyz State University says a lot about the Russian attitude towards literature. Tolstoy, Dostoevsky, Pushkin are similarly honoured. It’s no wonder that some of the best works of literature were written in Russian. 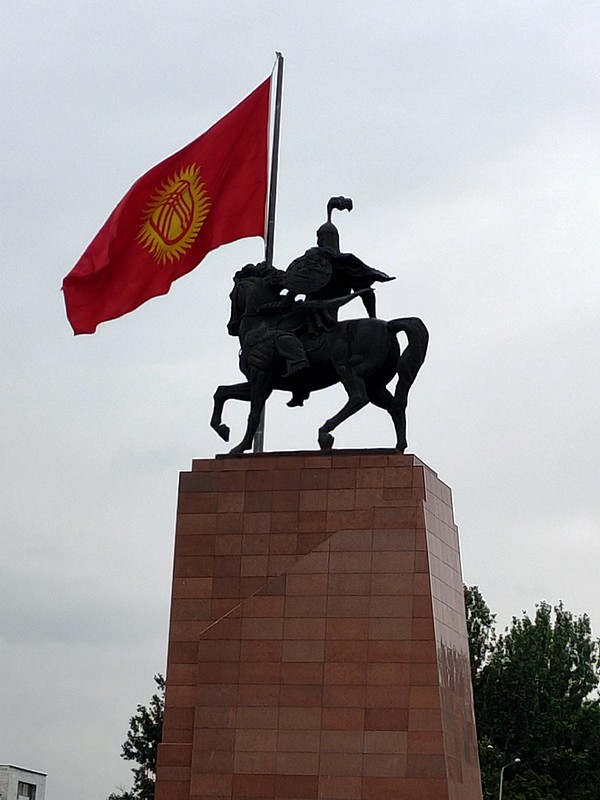 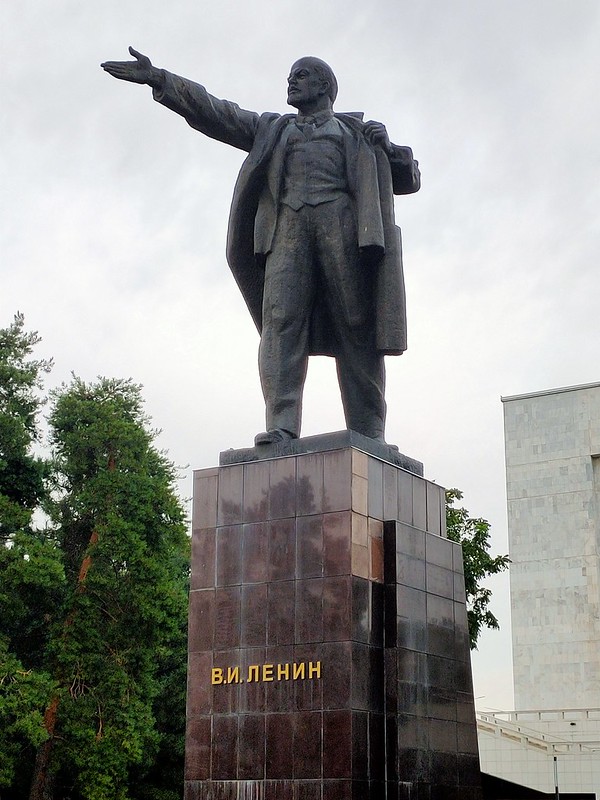 Of course, even idling makes one hungry and I was forced to do a little experimentation with Kyrgyz cuisine. I tried a fried fish at a reasonably classy restaurant. It turned out to be surprisingly good but I was not satiated. I went across the square and tried a very upmarket bistro over there. The trout was expensive and almost tasteless. I swore that I would never go back. 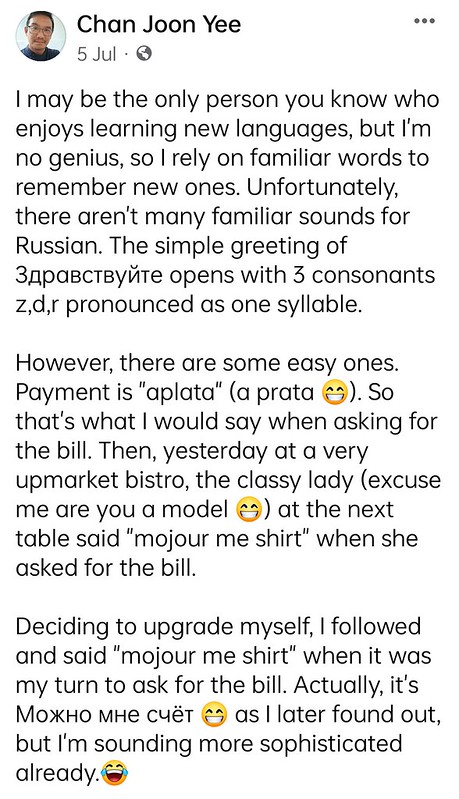 After lunch, I walked around the city and stumbled upon Bishkek Park, a shopping mall with nice toilets. I sat down for a coffee and had some fun teasing my friend Larry back in Singapore with random pictures of the distaff attractions around me. For dinner, I returned to the Chinese restaurant near my hotel and ordered a plate of fried mutton-filled buns. They were delicious. It had been a hot, sweltering day. The weather on the next day was a surprise. 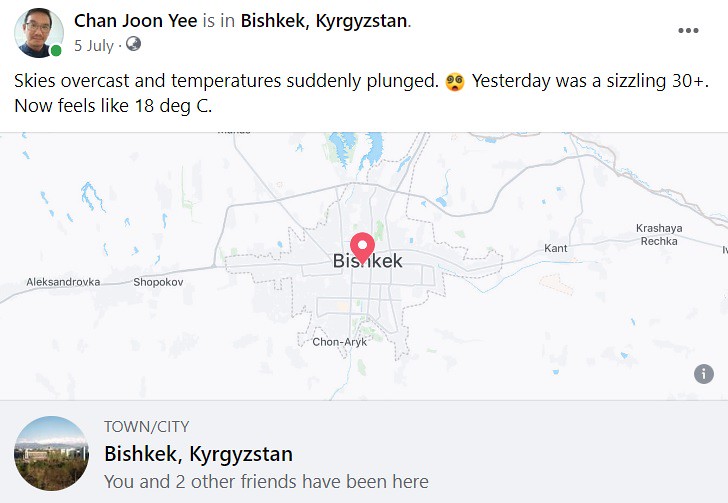 The sky was threatening to pour, but that didn’t stop me from skipping the uninspiring breakfast at the hotel. Back at Ala Too Square, it suddenly rained very heavily. I needed shield from the wind-driven rain. I needed a toilet and just a few steps away, was the upmarket bistro I swore never to return to. It appeared as if I was fated to give them a second chance. This was what I ordered. 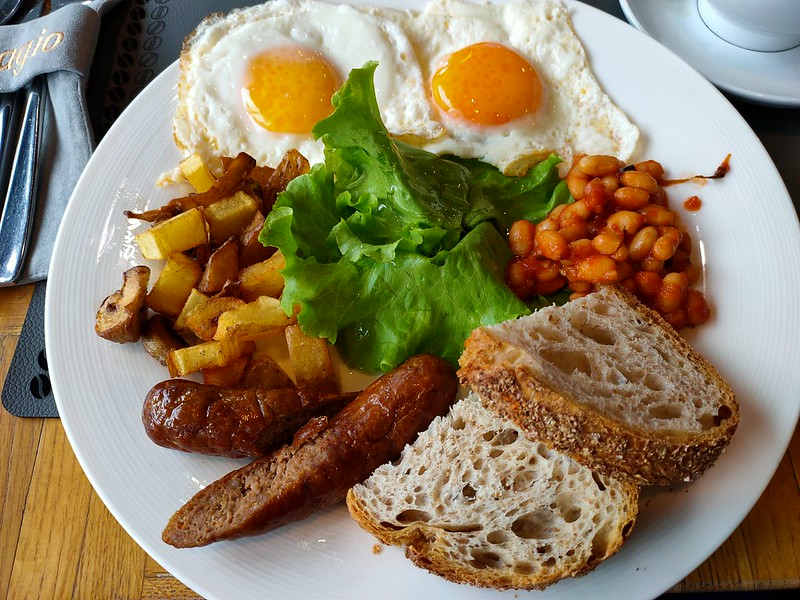 The breakfast turned out to be pretty good, but just as pricey as the lunch the day before. After breakfast and a much needed toilet break, I took a walk down to Bishkek Park once more. The fast food joints there didn’t look very promising. I had to be very selective because of limited stomach space. 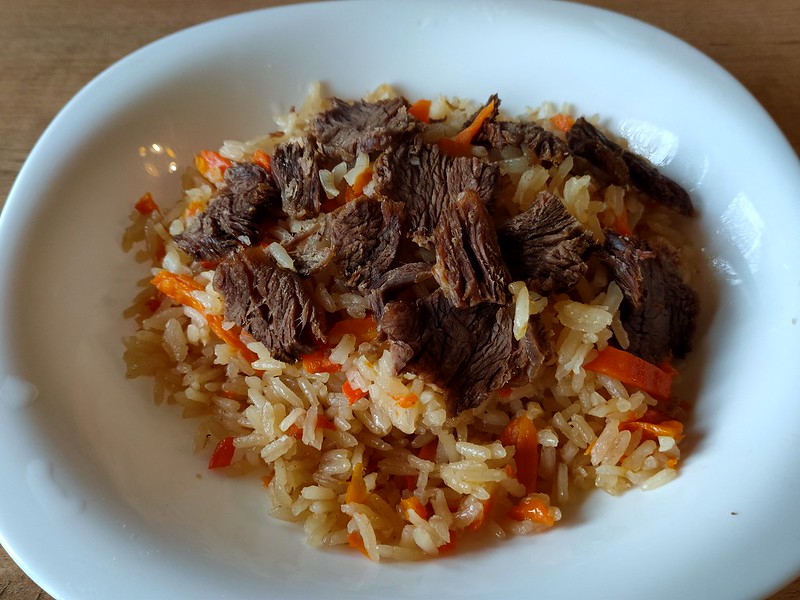 By lunchtime, the rain had stopped, but it was still a bit chilly and felt like 16 deg C. I returned to the square and ordered a plov which definitely reminds one of briyani, except that it’s bland and without the taste of spices. Again, I was not satiated. For dinner, I decided to splurge at a posh Indian restaurant to get back the punch that was missing in the plov. It turned out to be a mistake. The “prawns” were pathetically small and the curry was tasteless. Of course, there were other things to try, but my capacity was already full, I can’t always agree with Google reviews and I was definitely not ready for another experiment.

The sky above Bishkek was a pale and bright crimson at 8.00pm. Ala Too Square was thronged with families enjoying the magically colourful evening. It’s hard to imagine that in 2005, the election victory of Askar Akayev was challanged by the people. Led by opposition leader Kurmanbek Bakiyev, post-election demonstrations led to violence and the exile of Putin ally Akayev in Russia. Bakiyev took over as president.

In 2010, Kyrgyzstan’s president Bakiyev negotiated an energy deal with China which resulted in massive increase in electricity tariffs. Protests led to riots which started in Bishkek and spread to the rest of the country. Bakiyev was forced into exile in Belarus.

In October 2020, less than two years before my visit, protesters occupied Ala Too Square and stormed government buildings nearby after the election victory of President Sooronbay Jeenbekov. The resignation of the president resulted in a political stalemate and the appointment of interim president Sadyr Japarov who has remained in office until my visit to Kyrgyzstan.

The Bishkek I saw showed no signs of turmoil which is really part and parcel of the real world outside sanitary, strait-laced Singapore. It was my last evening in this beautiful city of good food, mediocre food, present peace, past conflicts, nice people, rude people, crumbling Ladas, purple Mercedes and second chances. 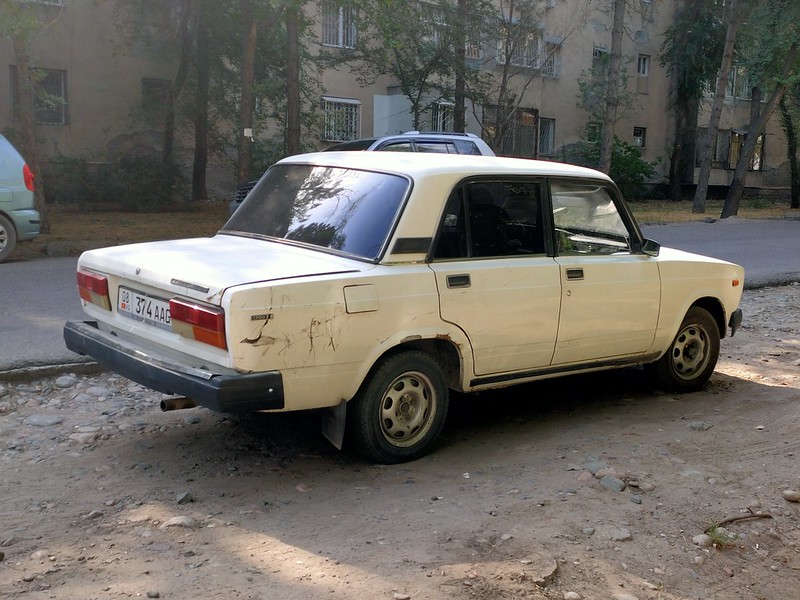 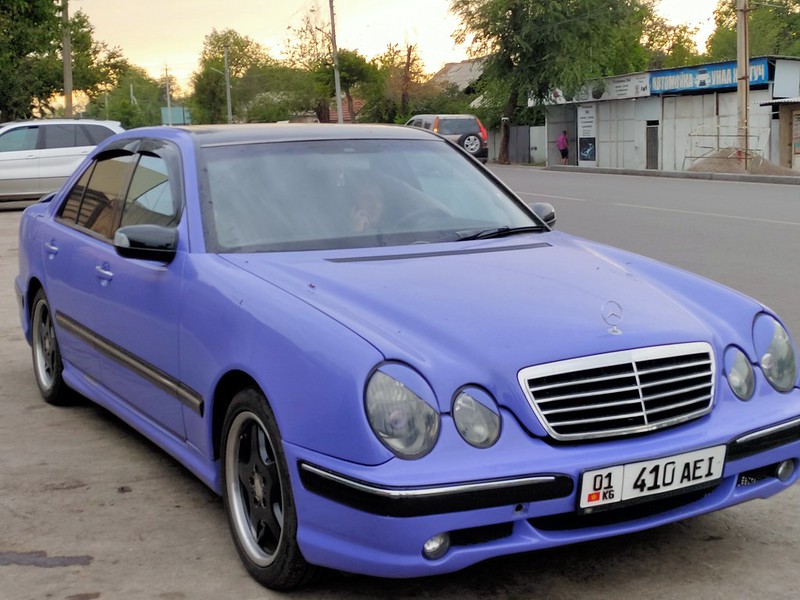