I arrived at Mrauk U in the early afternoon after a sweltering 3-hour journey from Sittwe. The non-aircon shared minibus brought me to the “bus station” which was really more like some squalid marketplace. Sleepy and dusty, those who tend to jump to conclusions may immediately regret making the trip. Surprisingly, the drivers seemed more like barbers taking their turns than some of the hungry fish in a feeding frenzy I encountered elsewhere. It was all quiet and orderly. Only one driver approached me, seemingly with the approval of the others. I took his tuk tuk to the Shwe Thazin Hotel. I had a whole list of questions for the hotel staff. The curfew time was actually 21:00 and not 19:00 as mentioned in so many online sources. Yes, the only reliable info is local info. 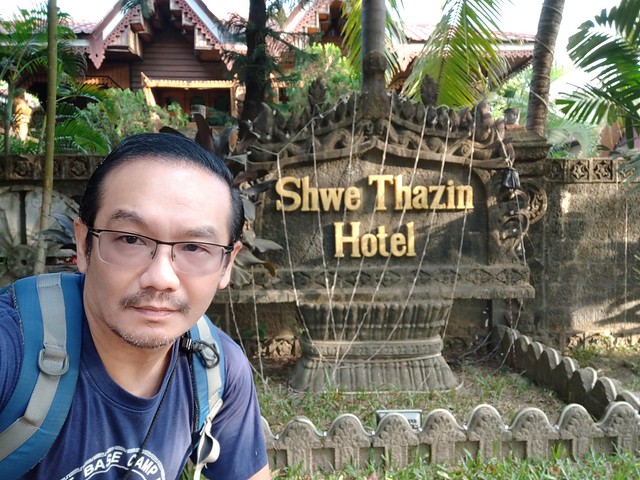 Almost like a reflection of hotels in Ubud (Bali), the Shwe Tharzin has some fine bungalows set within a luxuriant garden, but the room I booked was inside an uninspiring block right at the end. I soon realised that there were practically no tourists staying here. The rooms were occupied by international relief workers. Clearly, it’s not business as usual in Mrauk U, but for a new arrival like me, there was no evidence of the ongoing civil war. No sign of soldiers. No firing. No bullet holes. But yes, this is a war zone. 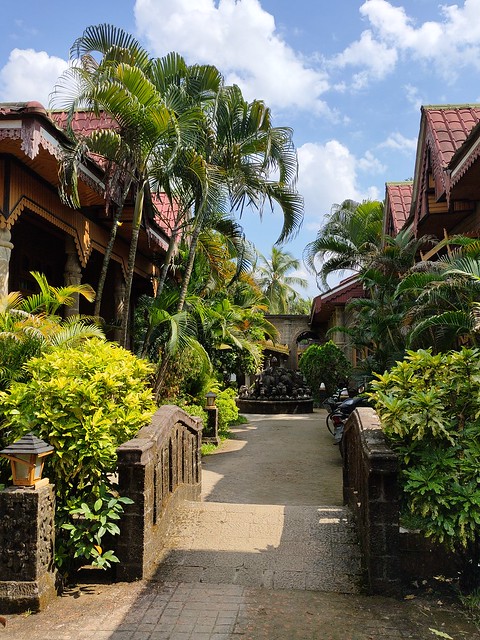 Of course, all this is not unexpected; otherwise I would not have dared set foot here. When I climb a volcano, the oxymoronic (sometimes just moronic) “uninitiated experts” would think that I would be leaping over rivulets of molten lava. A war zone like Mrauk U mentioned in the MFA’s website probably make them visualise hails of bullets and bombs exploding everywhere. If that were the case, the minibus driver would never have driven me here. The young mother with her toddler wouldn’t have travelled on the same bus. How do they know it’s safe? They all get live updates from the ground. This is the only reliable information.

In spite of what’s mentioned in travel advisories, Mrauk U was very safe at that point in time; as long as you didn’t stray from the usual attractions which neither army nor rebels would be keen on destroying. Folks who don’t get into trouble won’t make the news. You really need to be very unlucky to make the headlines. Still, nobody can guarantee your safety; not even your “go to” government. For people who have been sheltered and shepherded all their lives, this is one place and time where the individual has his full rights, freedom and responsibilities. 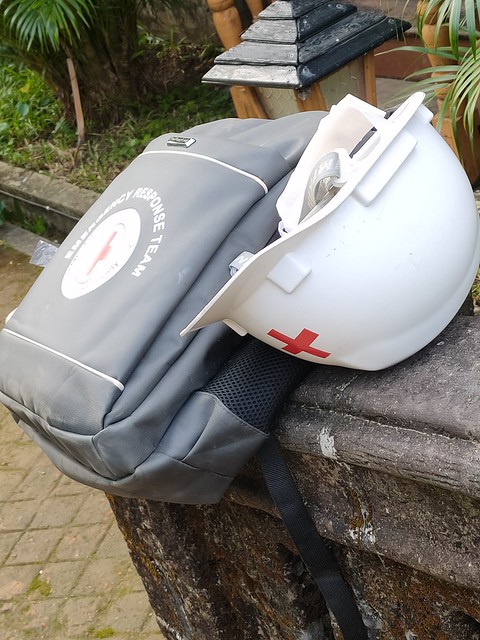 Foreign doctors and nurses (civilian) from Relief International were staying at the Shwe Thazin in Mrauk U. They were catering to the medical needs of refugees displaced by the civil war. Some of them have already been here for 2 months.

I might be crazy to visit war-torn Mrauk U as a tourist, but there are actually heroic people who have far better reasons to be here. They would stay for months in a war zone to lend assistance to the victims of war. I salute and admit that I can’t hold a candle to them. At the same time, I can’t imagine any of my peers in Singapore doing that. That’s why I sometimes wonder how differently these people must have been brought up. What motivates these folks to stick their necks out, defer wealth-generating work and voluntarily make such sacrifices for humankind? What makes us so nervous at the mere mention of protest and fighting even when it’s transient and taking place many miles away? The human species has a broad spectrum of personalities. I’m of course a Singaporean mutant. On a more serious note, it’s as if some have been brought up to brave while some have been brought up to fear. Having seen how resilient some small, weak and impoverished societies are, I often wonder if there really exists, societies so fragile that they can’t even withstand benign challenges to the leadership. 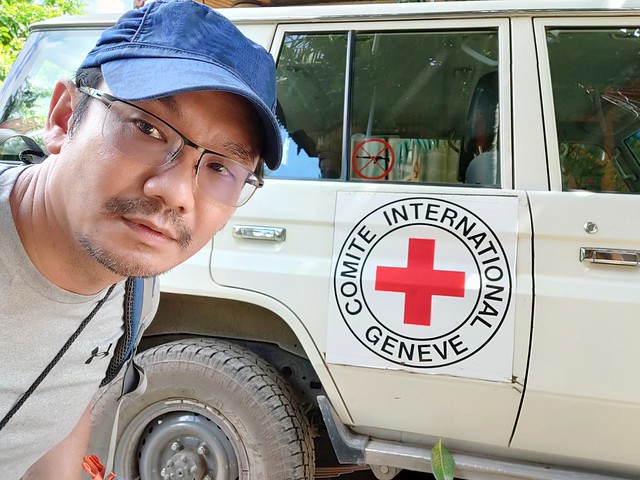 Even without the shells and bullets, Mrauk U was decidedly less happening than Sittwe. In fact, in many ways, it looked more like a sleepy village than a sleepy town. There were vast stretches of paddy fields and forests with a rich perfusion of minor waterways. And probably because of the ongoing military conflict, there seemed to be more roads than cars and even Burmese people from some other parts of the country were afraid to come here. Its glorious history notwithstanding, modern Mrauk U resembles some shabby border town in Thailand – until you encounter the stunning ruins. 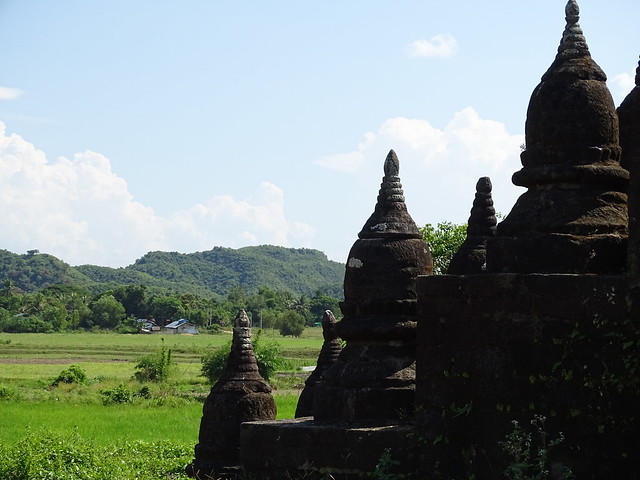 Built from milled stone instead of pressed bricks, the ancient temples here exude a mysterious charm, testimony to a golden age that contrasts sharply with today’s poverty and misery. I booked a driver for the rest of the day to make the best use of my limited time. He came in a brand new fiery red tuk tuk. Having been baked under the sun, the seat was like a stove top.

Our first stop was the largest and furthest temple from the heart of town – Paya Ko Thaung. Most of what I wish to say about Paya Ko Thaung is mentioned in the video below. It was here where I came closest to the fighting. The first mortar bomb explosion was pretty scary. It came just moments after I came down from the tuk tuk. When I realised that these explosions came at regular 10min intervals, they became easy to ignore. The worst part was actually walking on the baking ground barefooted.

I like Paya Ko Thaung for its isolation and its desertion. It sits on a vast field, seemingly distanced from the habitat of mortals. I like the way it introduced me to Mrauk U temple architecture, guiding me into a surprising hollowness filled with Buddha images, all dripping with neglect, rewarded for their longevity with a blessing of weeds from Mother Nature. For nearly 600 years, the stupas and Buddhas stood oblivious to the ravages of time and human concerns.

This was the ancient capital of Arakan. Construction of this glorious city began in 1535. Thousands of workers laboured for years to fashion the thick, windowless walls, cutting massive sandstone blocks and fitting them together. Before erosion set in, the original blocks could hold together even without cement. Typical of the temples here in Mrauk U, this was a fortress, a dungeon, a storm shelter all rolled into one. 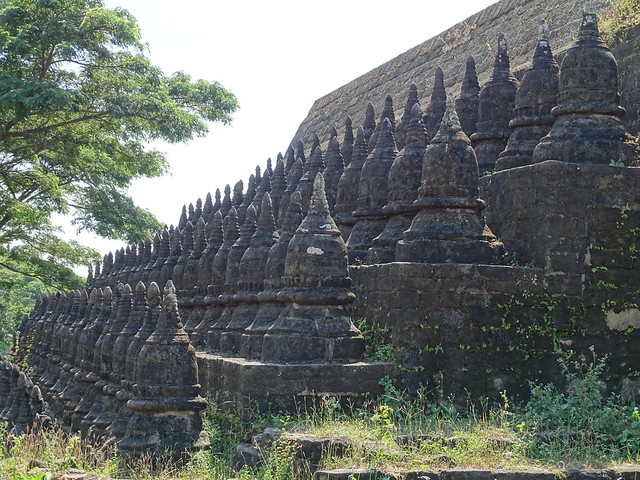 Back when the kingdom held sway over the region from the 1430s till 1784, Muslims and Buddhists served side by side in the Arakan court. It was a global city hosting Dutch, Portuguese, Chinese and Japanese merchants who dwelt in their respective quarters, trading spices, textiles, opium, iron, tobacco, sulfur and pepper for rice and ivory. Having formed alliances with the Mughal rulers of India, the latter had also stationed troops in Mrauk U to guard their own commercial interests. They hired guards from places as distant as Japan. Deposed Indian princes or those in exile after failed coup attempts have all found a safe domicile in Mrauk U.

All that came to an end when Arakan was invaded by the Konbaung Dynasty of Burma in 1784. The arrival of Bamar people and their ethnic insensitivity are the usual targets to blame for not just the loss of the Arakan heritage but also the current conflicts. What if Burma had never been invaded? What if Arakan had remained independent? What if Arakan regains its independence? Attempts to find the answers ignited a civil war and it would be fecklessly simplistic to label these folks “separatists” or even “terrorists”. The recently (2009) formed Arakan army has teamed up with the Kachin army, the most powerful insurgent army in Myanmar.

Eloquent and charismatic Major General Twan Mrat Naing (alias Tun Myat Naing) is a graduate from Sittwe Technological University. Originally holding the post of military engineer, he went into jade mining in Kachin State and that changed his life forever. After holding talks and discussions with like-minded members of the minority, he decided to form the Arakan army in alliance with his Kachin counterparts. His deputy is a surgeon. From the video, you may find their weapons familiar. I’ve seen Shan armies carrying it as well. It is the 81式自动步枪. No prizes for guessing where they got it from.

As if that is not complicated enough, it is interesting to note that many Bangladeshis living near the border had called upon the Arakan army to liberate them from Bangladeshi rule. To allow the split or to forcibly bind? There are no easy answers.

As the mortar bombs went off in the distant hills, my driver reassured me that the fighting between the Arakan army and the Tatmadaw was taking place a good 15 miles away. I assumed that the sacredness of the temple would somehow protect me; not that I believe in its divine powers. Sure the walls of the enclosures were thick enough to stop bullets, but would the soldiers ever shoot here? I was reminded of the protesters in Greece who sprayed paint on shop windows. Churches that were lying in between were always spared. War can be senseless, but when there is faith, any kind of faith, humanity will finally prevail.

The only piece of good news for Arakan – many more temples lie hidden under the jungle foliage. How much more magnificent Mrauk U would be if they could all be uncovered and restored to their former glory? Will it rival Bagan? Will the people’s quest for autonomy or even independence be even stronger? Or will the fighting stop to let in more tourist dollars? Will Arakan ultimately win?