About 50 minutes after taking off from Yangon, the plane flew over what seemed like a network of blood vessels. This is the river delta, relentlessly shredded by the confluence of the Kaladan, Mayu, and Lay Mro rivers, straining out into the Bay of Bengal. To the north, is a natural barrier in the form of the Arakan Mountains. Torrential rainfall during the rainy season makes this one of the wettest places on earth. Unfortunately, poor soils limit agricultural output.

For most of its history, access to Arakan was solely by sea or a complex network of inland waterways. Strategic geographical location was Arakan’s only gift. Nature created this land for a maritime power with a fierce navy and charming Venetian-like towns and cities.

The founders of ancient Arakan were probably Indians as the earliest historical records found here were in Sanskrit. It is now widely believed that the Arakan region could have been the geographical point of entry for Hinduism and Buddhism into mainland Southeast Asia some 2,000 years ago.

The first identifiable Arakan states flourished between the 4th and 6th centuries, but it was not till 1433 when King Narameikhla came to the throne at a time of declining Majapahit (Java) influence in the region that the Arakan Kingdom became a regional power. Narameikhla paid homage to Mughal rulers in India in exchange for protection and military aid and built a powerful navy that controlled the Bay of Bengal from Sundarbans in Bangladesh to Moulmein until 1784 when the Burmese invaded and the last Arakan king Thamada was deposed in 1785. 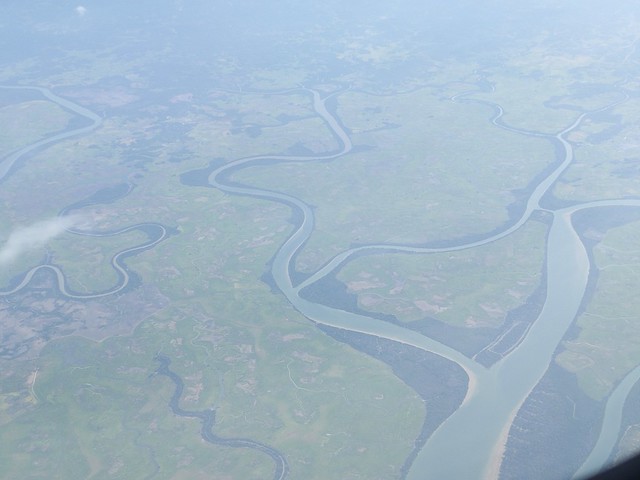 Sittwe (formerly named Akyab by the British) was founded by the British in 1826 when British soldiers stationed at Mrauk U found the weather there too stifling. Fanned by sea breezes, the coastal city of Sittwe is the capital city of today’s Rakhine State (formerly Arakan) in Myanmar. It lies near the tip of one of numerous land projections bounded by three river estuaries, namely the Kaladan, Mayu, and Lay Mro. Some sources say that Sittwe means “battle front” in Arakanese. Indeed it was here where the Arakan army first met the Burmese invaders in 1784 before the latter overran their capital at Mrauk U. Why the Burmese government decided to give it such a name is anybody’s guess.

Landing in Sittwe was not exactly like travelling back in time. No, that expression is way too cliche and inaccurate. The airport was definitely a modern building. In fact, it didn’t look that old. It just didn’t have that much capacity and facilities. Before leaving the arrival hall, foreigners had to register themselves at a counter. The uniformed officer copied down our passport information in a record book by hand. It was a rare sight for this 21st century. I guess manpower is still much cheaper than scanners and copiers in these parts. Luckily there were not too many of us.

It was 17:30 when I stepped out of the airport. I said Mrauk U (I’m not kidding, it’s pronounced like a cat’s “meow”) to the taxi drivers and they all shook their heads. It takes 3 hours to drive to Mrauk U from Sittwe and nobody was confident of reaching there before curfew time. I was forced to stay a night at Sittwe – which turned out to be not such a bad idea, (contrary to a lot of the advice out there) for Sittwe’s View Point Beach was unforgettably beautiful. 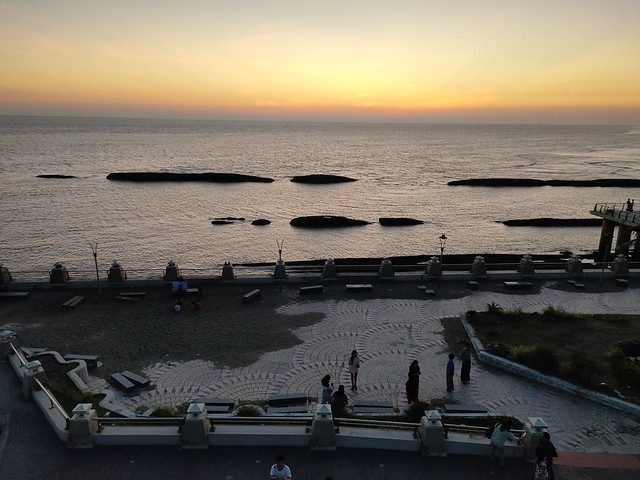 A short, 3km ride on the tuk tuk took me to View Point Beach on a breezy coastal road. My ride ended at a gate with motorbikes and other tuk tuks parked outside. I entered the gate and strolled onto a tiled platform. There was a curious statue of a sumo wrestler, a flute player and a mythical creature. At one end of the platform, was an old lighthouse which had been converted to a viewing tower overlooking a rocky shore. Far out to sea where the water was deeper, numerous bands of rock seemed to protrude from the surface of the water. 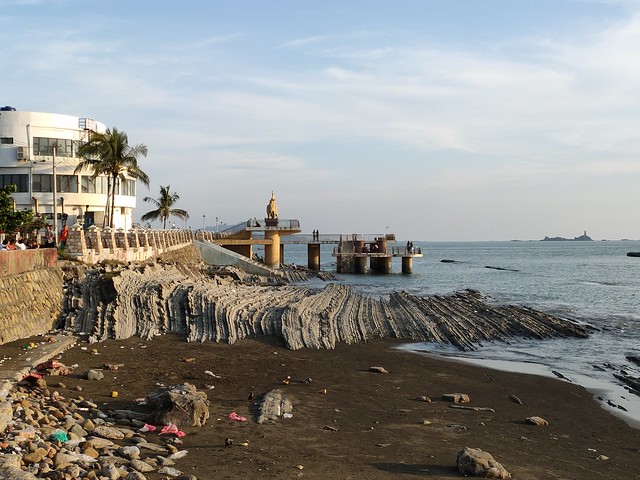 There were some parts where the “rock” looked like some crudely constructed concrete ramp. There was supposed to be a restaurant here, but it was not open. Without entering the gate from the car park, the coastal road actually continues northwest along a black sand beach that slid gently into the sea. One could also walk down the rough concrete ramp onto the sand and proceed further down the beach where numerous BBQ and beer stalls lined the coastal road. 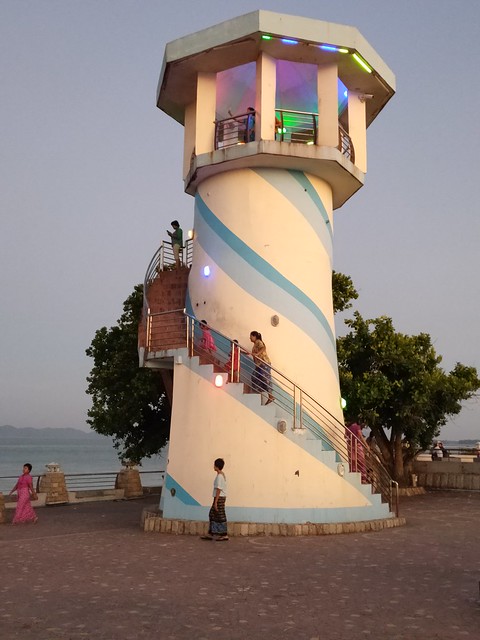 With myself only remotely resembling a foreigner, I didn’t see anyone who looked like a foreigner here. I wondered if it was the result of too many potential visitors paying too much heed to the travel advisories or if this is Sittwe’s best kept secret. Whatever the case, as you read this, View Point Beach is no longer a secret. The only thing to keep the crowds down would be the kiasi travel advisories. 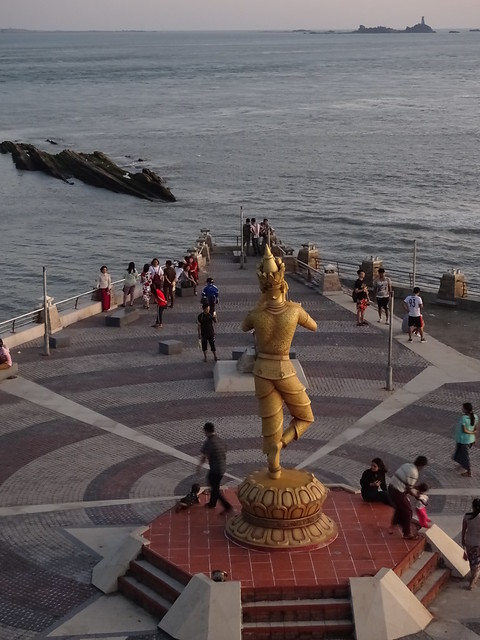 People here were cheerful and happily minding their own business, yet stallholders hawking snacks, fruits and drinks were most welcoming to anyone who looked remotely like a potential customer. There were not many children playing on the beach, but young ladies were out there, laughing and pretending to pose like professional models. Serious photographers lugged their bulky cameras and gear. Couples sat under trees, fitness fans jogged on the mirrored surface of the sand polished by the waves.

The atmosphere was peaceful and relaxed, the only “drama” being the puffing clouds of smoke from grilling meat. It’s difficult for sheltered and shepherded folks to imagine that just 7 years ago, devastating violence rocked the entire state of Rakhine, leading to a state of emergency being declared. There has been a major jolt in Sittwe’s demographics as the local Rakhines staged an anti-Muslim campaign. The militants have been routed, but the blunt instrument of war swept across the field, cutting down the guilty and innocent alike. Houses have been torched, lives have been lost, thousands of refugees took to the sea. The mosque is now abandoned and few Muslims are left. Those remaining keep a very low profile. The dust has now settled and life has gone on as it should have. How did they do it? Are these folks remarkably resilient? Or are those who are surprised simply too fragile. 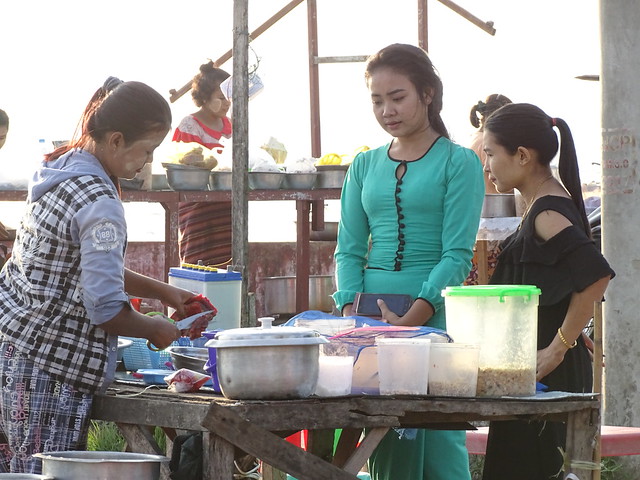 I returned to View Point Beach on my way back from Mrauk U. One seldom stumbles on sunsets. To capture that fleeting moment, you need to get into position and wait. Arriving late means your next chance will only come in 24 hours. I never get tired of sunsets as there is something immensely soothing and poetic about them. Arriving early often means that you’ll have plenty of time to kill. I wandered away from the lighthouse, the restaurant, the platforms. A vast stretch of black sandy beach stood between me and the Bay of Bengal. 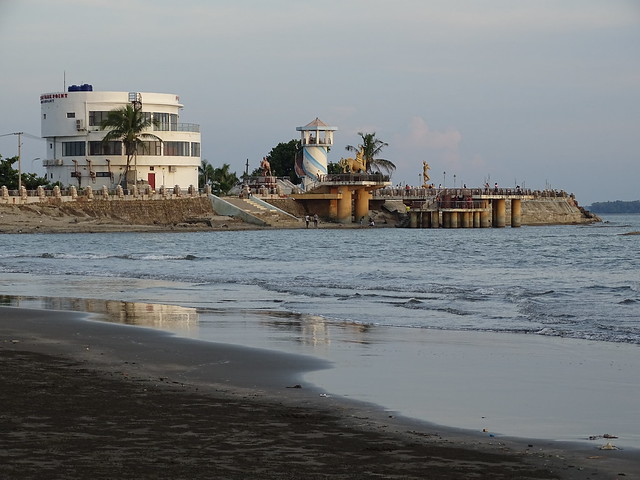 Waves began to rush in. The further north I went on the western shore, the smoother the shoreline became. No wonder the British wanted to move their administrative centre here. The sun’s glow turned visually warmer by the minute. The sea breeze caressed the faces of everyone loved and unloved, liberally sprinkling joy on our faces. Sunsets teach the important lesson that we should relish the moment and be prepared to let go. 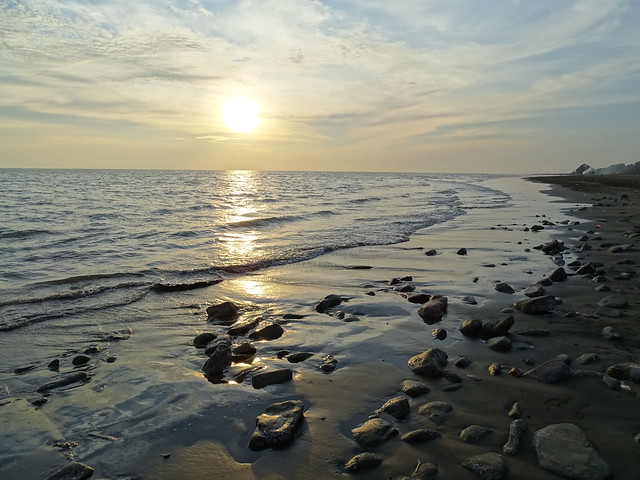 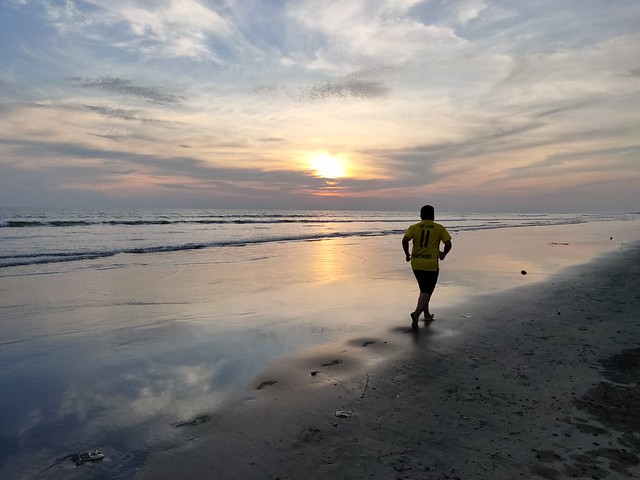 As the fiery red sun kissed the horizon, I knew it was time to leave. With so many tuk tuks waiting at the car park, getting back was not a problem. The Shwe Thazin Hotel (Sittwe branch of the same group at Mrauk U) and it was less than 5 mins walk from the River Valley Seafood Restaurant. Time for a grilled fish and a bottle of Myanmar Beer. 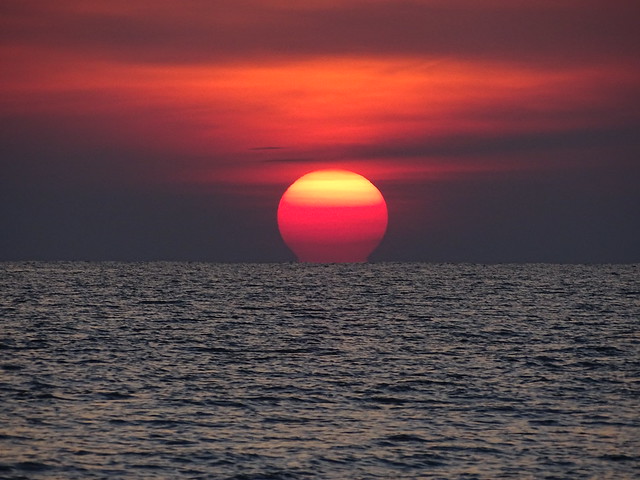