Like many boys growing up in the 1960s, I was fascinated with trains. We didn’t have the MRT back then, so taking the train to my parents’ hometown in Malaysia was something I had always looked forward to. Journeys were tedious and boring; not to mention the rocking and chugging which didn’t exactly encourage sleep. Of course, for those who can afford it, a long train ride can be enjoyed as a moving luxury hotel, a romantic cruise on tracks. But then, what for? Surely, safety standards must have improved tremendously since the Titanic sank. There is no way trains can compete with the space and possibilities of these floating island resorts. Quite naturally, trains are seldom chosen as the place to spend a honeymoon.

With the advent of high speed trains, the romance of train travel took another blow. Journeys now need to be fast and efficient and I agree that for business travel and most instances even when one is travelling for leisure, high speed trains are a great time saver. But the romantic wanderer needs time and space – not speed. The discomfort of traditional train travel can often be negated by the exotic and inspiring sights and sounds on slow, lumbering trains.

There are pretty good roads between Hsipaw and Pyin Oo Lwin and a bus ride takes about 3 hours. The train takes about 6 hours. Which did I pick? The train of course. Back in the FEC days, trains in Myanmar were ridiculously expensive for foreigners. For that reason, I didn’t bother to take the train back then, so this was my first train ride in Myanmar which also turned out to be one of my most enjoyable.

The tuk tuk driver was so nice that he didn’t just drive me into the station. He actually drove all the way up to the office where foreigners were supposed to buy their tickets. When I entered the office, one of the officers told me very politely that the train was delayed by two hours. Of course, that sounded painfully familiar. Nevertheless, Hsipaw is a small place. The train station was rather shoddy, but it was nowhere as “humanly chaotic” as those in India. 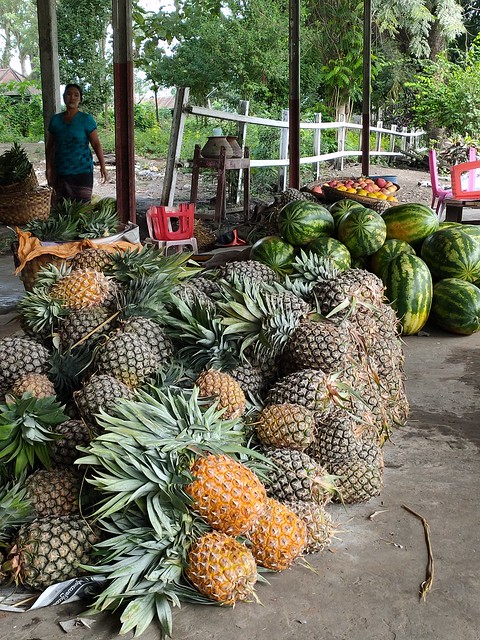 The first thing that struck me about the small, dusty platform was the huge piles of fruits. Certainly, the ladies didn’t expect to be able to sell all of the pineapples and water melons to passengers. There were also baskets full of apples and oranges. No, this was no humble fruit stall at the train station. For these ladies, the train platform also doubled up as a mini fruit market. Buyers came from across the tracks, returning with purchases balanced on their heads. 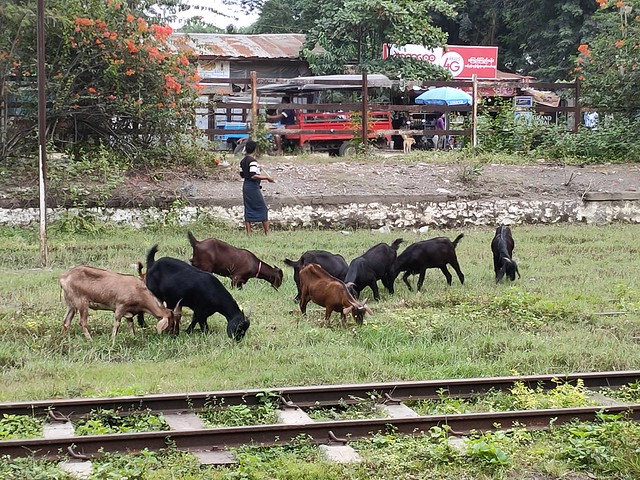 Space in between the tracks was also not wasted. It was grazing ground for the urban shepherds. With few runs and limited traffic, grass grew even on the tracks. Planned or unplanned, official or unofficial, orderly or just following the order of the day, life just flows along like the Myitnge River.

At 11.00am, foreigners who are used to punctuality started swarming into the office. The train which was supposed to depart at 9.00am, postponed to 11.00am, was still nowhere in sight. Tickets sales however, had started. The officer made a very sincere apology to the waiting foreigners and started to sell the tickets. One by one, he copied my passport details in a record book, wrote the same details on the tickets and collected money for them. Each passenger took up about 2-3 minutes. Obsessed with efficiency and distressed when it’s lacking, we were all worried if the train might arrive and leave before we could get our tickets, but there were only about 20 of us and train arrived at almost 1.00pm. 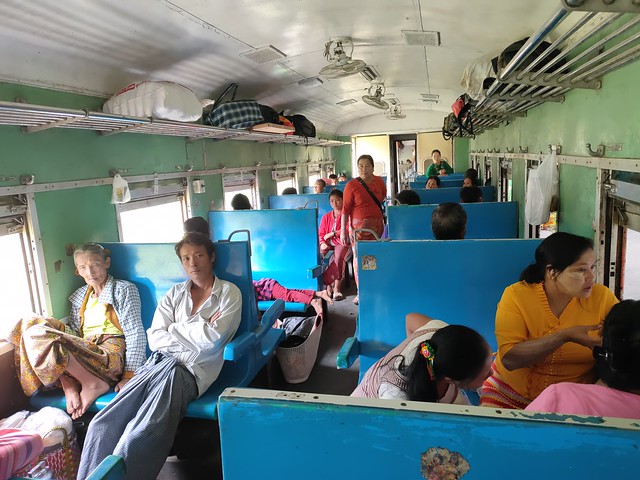 I purchased my “lower class” ticket (about S$1.40) for the 141km ride from Hsipaw to Pyin Oo Lwin. I’ve been advised by the owner of Lily Hotel to take a lower class seat as the windows at upper class can’t be opened fully. A seat on the right side of the train would also give a better view. 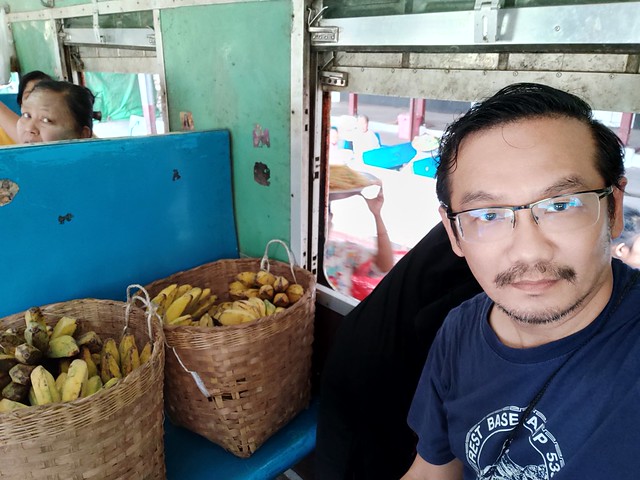 Boarding the train was already the start of the adventure. When I found my seat, I found it occupied by two baskets of bananas. Fortunately, a fellow help me with the “translation” and the bananas found their seats opposite mine. The hard seat was littered with torn foliage. I dusted it, only to realise later that it was futile.

The train pulled to a slow start. As the segmented giant started picking up speed, I realised where the torn foliage came from. The windows acted as hedge trimmers. Shredded leaves splattered into the train every time the train passed a branch that had leaned over the tracks. Before long, I was covered in botanical confetti.

The slow speed of the train made it easy on the eyes. The view outside was mesmerising. The train brushed past bushes bursting with wild sunflowers, we clattered past corn fields and paddy fields, all harvested and browning under the sun. The monsoon was departing. The cool wind from the north would caress the plateau, welcoming the new year.

My fruity companions disembarked. Two Shan children boarded the train and sat opposite me. Without computers, I wondered how their ticket seller at the station downstream knew that my seat was occupied or the seat occupied by the bananas would be vacated when the children boarded. Did Hsipaw phone or fax them? An unsolved mystery.

The children were shy but curious. Though Shan people are known as Thai Yai or Great Thai, the Shan language is quite different from Thai. Communication was tough. We relied on hand signals and photo albums on my mobile phone. Like all good fellow passengers, they offered me snacks.

I’m not sure if it was the first time the kids were on this train, but they were clearly as excited as I was as we approached the Goteik Viaduct – my main reason for enduring this 6-hour ride. The facts and figures for the bridge are all on Wikipedia. Constructed more than 100 years ago, it’s a miracle that this enormous engineering feat is still standing today. The whole experience is best described by the video below.

For those with a fear of heights, the slow and creaky 800m plod over the bridge could feel like an eternity. For only about $1.40 a ride, this beats any of the overpriced and highly contrived “attractions” at Sentosa or MBS. The gorge is as hair-raising as it is beautiful. 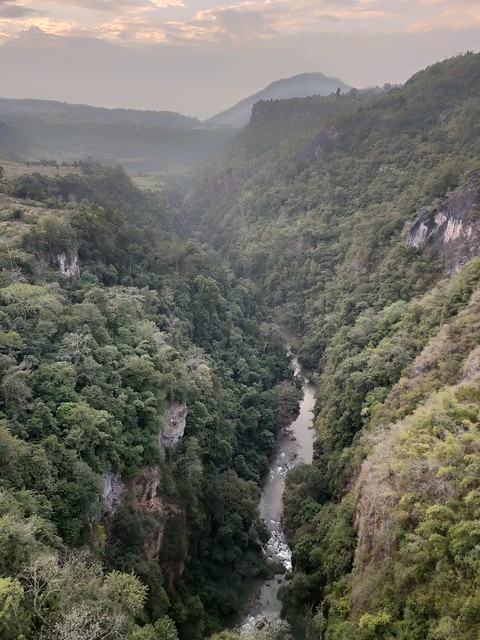 Once past the main attraction, the sky started to dim and the kids alighted at Hsum Hsai. Darkness soon fell and with nothing to see, I drew the window shut. No more botanical confetti. After a long laborious climb, we pulled into Pyin Oo Lwin station – my final destination for the day.