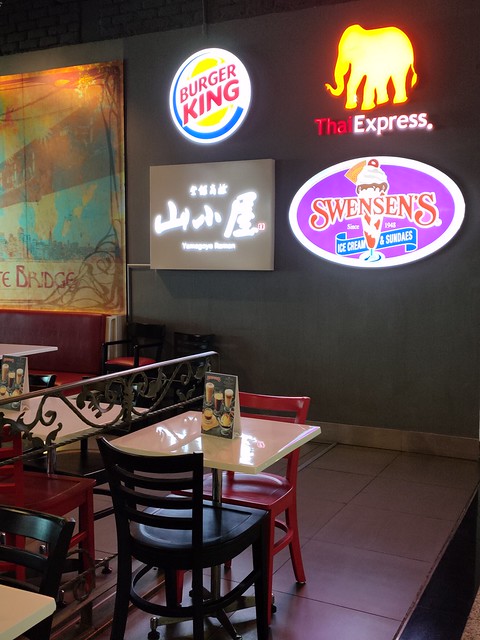 When I first visited Myanmar some 15 years ago, Foreign Exchange Certificates (FECs) were still in use and the Lady was still under house arrest. Today’s Myanmar is almost a different world. It’s still a military dictatorship, but Facebook and Google are not blocked. Freed from house arrest, the Lady is now Myanmar’s State Counsellor.

The first thing that struck me was of course the new airport at Yangon. It’s not quite the size of Jakarta’s but definitely as swank. Out on the streets, the rickety buses and cars from the 1970s were all gone. It’s not quite Bangkok yet, but there was a new monumental feature here – traffic jams.

The seedy provision shops without too many provisions, have been reincarnated as well-lit, modern convenience stores complete with Belgian chocolates and Korean instant noodles. Newsstands of the past used to sell wrinkled back issues and stolen inflight magazines. Nowadays, it’s possible to find the latest issue of Time or Bloomberg.

On this visit, I stayed at the Merchant Art Hotel. It’s a relatively small boutique hotel, tastefully designed with imaginative wallpapers and thoughtful surprises like a welcome fruit platter. The biggest surprise I got, however, came from the superbly well-trained staff. Always eager to help, their attitude was exemplary. 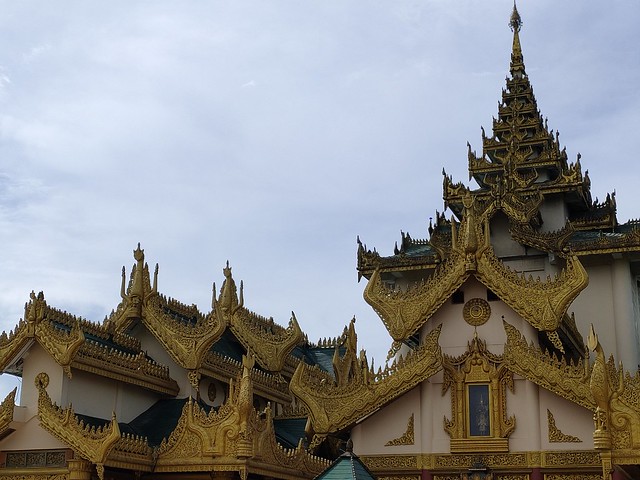 For someone who enjoys tranquility with a good dose of solitude, Yangon should only be a transit point. While Naypidaw is now the official capital, Yangon is still the major conduit for most cheap package tourists. Upon first arrival from Singapore, I flew straight to Sittwe without even entering the city. On my second arrival from Sittwe, I seriously contemplated staying in my hotel room most of the time. But after chatting with a bellboy at the hotel, I discovered to my delight, a couple of sites in the big city which may receive only a trickle of loud and overexcited package tourists.

Kandawgyi Lake is actually a reservoir built by the British to provide clean water to the residents of Rangoon. The source of its water is actually the much bigger Inya Lake. There are a few parks surrounding this lake. To the east, is the very prominent and opulent Karaweik Hall. 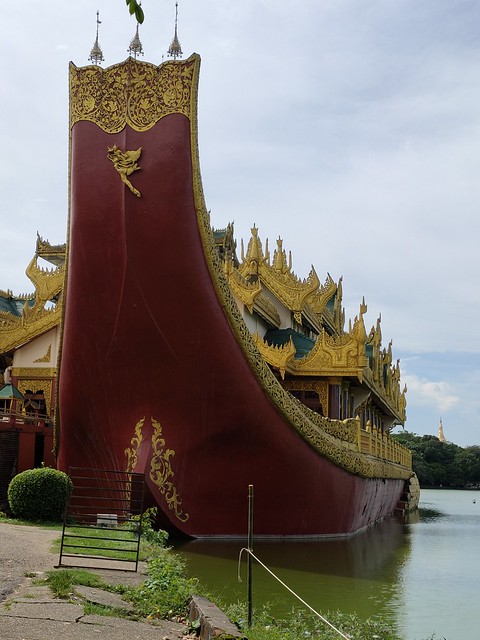 Karaweik Hall is a palace on the eastern shore of Kandawgyi Lake. Rather imaginatively constructed, it resembles a royal barge resting on the backs of a pair of mythical birds. Of course, it only appears to float. Although its design is based on that of a royal barge, the Karaweik, a fairly recent building, was not meant to be a palace. In fact, construction took place in 1972 when Burma hosted the Olympic Games. The original structure had two reception halls and a conference room and was completed in 1974. The original structure wasn’t so grand. The gilded layer was placed only 20 years ago.

Myanmar’s citizens have been liberated from the divinity of their royalty since 1885. Prince Thibaw Min, thinking that British soldiers were going to stab him with their polished bayonets when they showed their respect and presented arms in his presence, went on his knees, wailed like a child and begged for his life. Today’s Karaweik has been put to good use, having been converted into a very posh restaurant that proudly insists that you pay for the buffet at the very entrance on the shore, thus guarding the exclusivity of the palatial structure. You even have to pay to enter the car park. 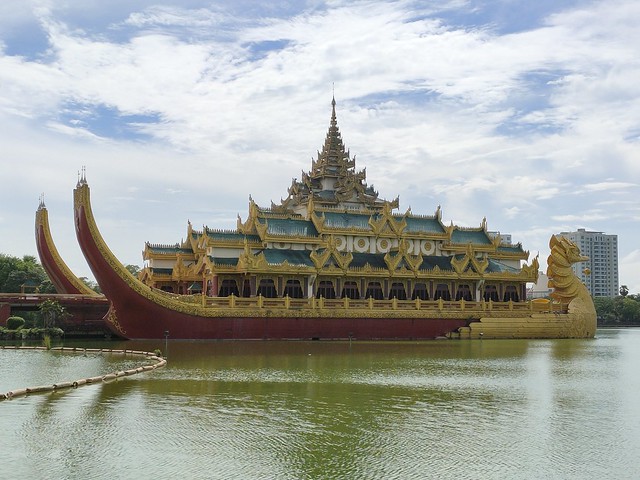 It’s interesting or even funny to behold the squads of non-dining tourists coyly milling around the imposing building, snapping pictures of the Karaweik which is actually better viewed from across the lake. But this was where their tour buses were parked. I soon realised that I came to the wrong the place. This was some congregation point for the shepherded tourists. There were tour buses and posh restaurants everywhere, though none was comparable to the Karaweik in terms of granduer. Maybe I should check it out one day if I have someone to impress.

Walking clockwise around the lake from Karaweik, Katharyar Centre is just across the main road. There’s a small shopping centre and supermarket where you can grab a snack, a drink and a toilet break. There is a board walk alongside the lake, but when I was there, the path was under heavy construction. 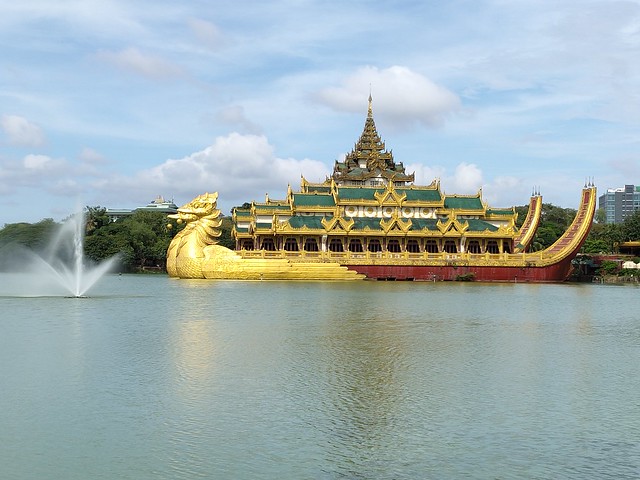 Going in the other direction, you will end up at Bogyoke Park or General Aung San Park. A statue of General Aung San stands at the entrance and entry is free over here. Unlike the area surrounding the Karaweik, you can walk right in for a stroll along the lake without too much background noise from the rowdy folks. Curiously, there is an abandoned Chinese boat at one corner of the lake. I wonder who left it there. 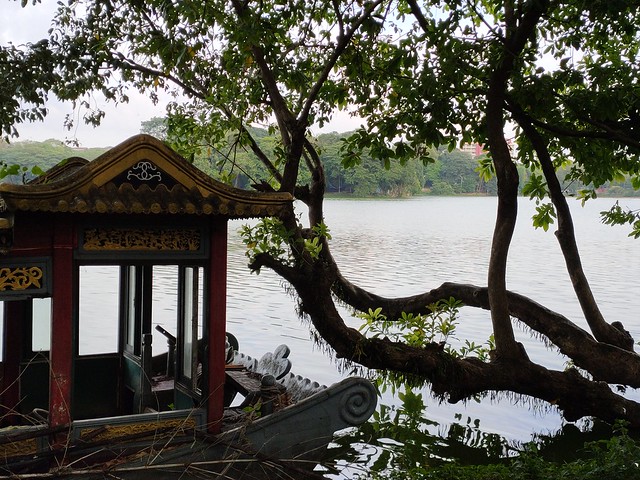 From here, there is a view of the other side of the Karaweik. The two mythical birds appear like a couple of golden ducks, supporting the royal barge on their backs. But if you ever see them move, then it must be an earthquake.

Natural disasters aside, there is much tranquility here though alcohol consumption is not allowed. The more pensive ones can spend a whole day here reading, writing, daydreaming or just watching the world go by. 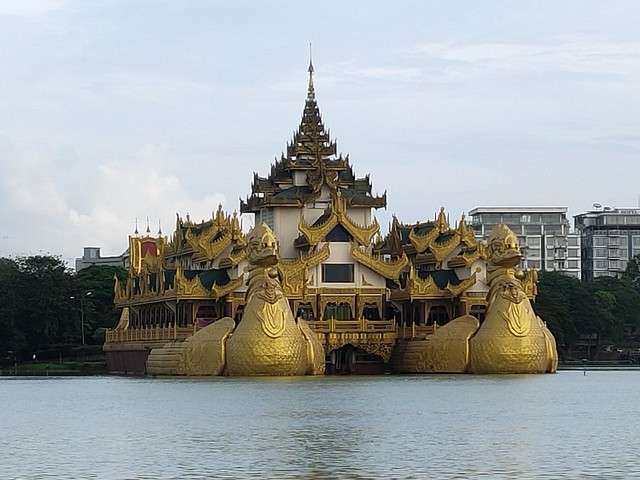 Like the other Kandawgyi Lake at Pyin Oo Lwin, there is a tower here in Yangon. But unlike the one at Pyin Oo Lwin, the elevator here is working and it takes you to the top for an aerial view of the lake and its surroundings. From this viewpoint, the water in the lake is emerald green, like jade.

I had planned to visit Shwedagon Pagoda in the evening, but it soon started to pour. Rain was quite heavy the next morning. According to the weather forecast, a low pressure area was forming in the Andaman Sea. There was little likelihood of it turning cyclonic, but Yangon would experience heavy thunderstorms for the next few days. With nothing much to do, I went to the airport early. That afternoon, I landed in cool and sunny Lashio. 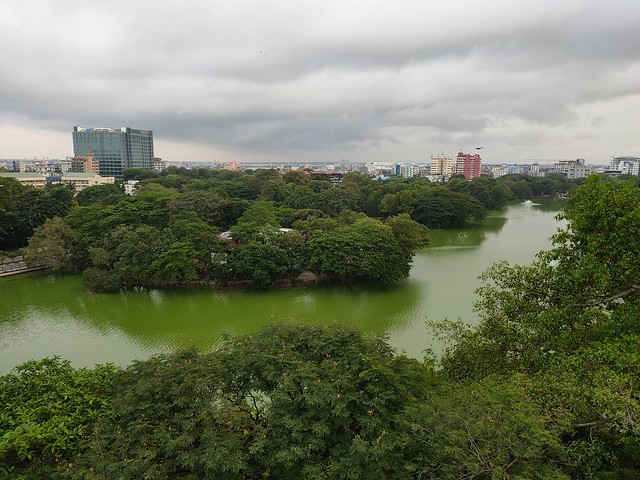 From Mandalay, it was a very different Yangon that greeted me when I returned here almost a week later. It was bright and sunny. There was no sign of the storms I encountered earlier. I had just enough time to do some shopping and head off to Yangon’s most iconic building, the Shwedagon Pagoda for one last look before returning home. I knew it was going to be crowded, but it’s a must see in Yangon. Since the weather was on my side now, why not? 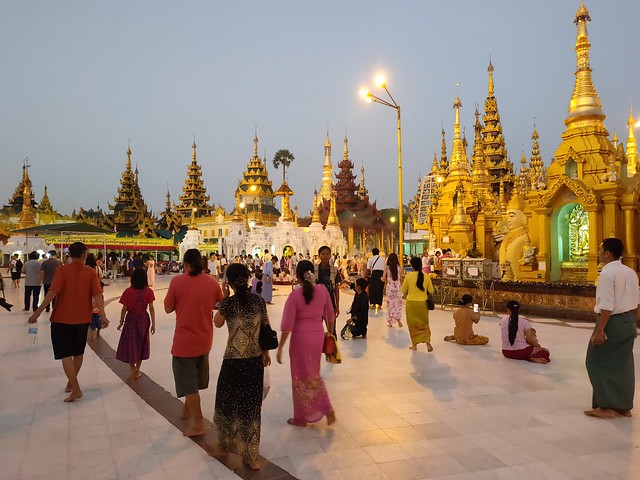 Symmetrical though imperfectly so, Shwedagon Pagoda has four entrances. As the sun was setting, I chose the West Gate to enter. The shoe-free zone begins right at the bottom of the stairs. If you’ve forgotten your plastic bag (to hold your shoes), you will find people offering them for a small “donation”. Walk barefoot up the stairs and you’ll come to a ticket booth just below the deck. Once you’ve purchased your ticket, you get a sticker to stick on your chest and you’re free to explore on your own. 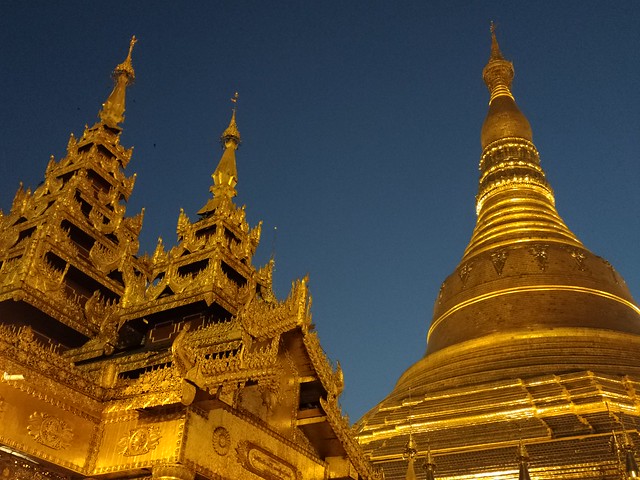 Like I said, it’s difficult to avoid the crowds here even if you come before the pagoda closes at 10.00pm. Perhaps the most visited place in Myanmar, you’ll hear almost every language in the world spoken here. Some visitors are only interested in photography. Some walk around the stupa to gain merit, reminding me of Boudanath in Nepal. Some conduct pujas with prayer and incense burning. Some bathe Buddhas (like I did 15 years ago). Some even try to meditate on the many sheltered platforms on the side. The busiest time at the pagoda is around 7.00pm. When the sky turns deep blue and the lights come on, the full glitter of 60 tonnes of gold is revealed. 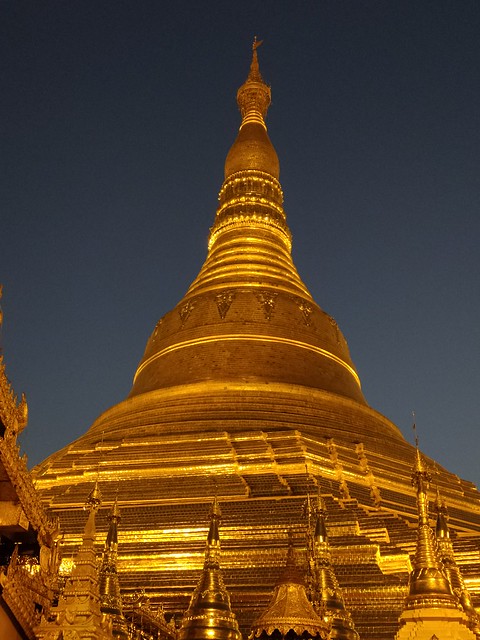 As I waited for the lights to come on, I saw a familiar face. I recognised him, except that his hair had all turned white. As he was busy explaining things to tourists, I pretended not to know him and walked away. Later, he approached me and asked me if I was the one he guided 15 years ago! There was no denying now. He guided me around Shwedagon Pagoda 15 years ago, told my fortune and advised me on Buddha-bathing rituals to avert misfortune. I was amazed how he could remember me. He must have met thousands of other tourists in the last 15 years. I was honoured and pleasantly surprised.

I descended the stairs towards the east gate, my feet collecting more and more dirt as I approached the road. There were a lot more shops over here. On the road itself, there were even more shops selling Buddha images and all forms of offerings. In the realm of desire, there were many food stalls and as the festive mood of the Tazaungdaing festival was still evident, there were also street performances; singers with notes pinned on their sleeves. Thailand has garlands, Myanmar has safety pins?

From the busy street outside the pagoda, it’s just a short walk to the Merchant Art Hotel. After a dinner of grilled prawns, fresh and live from the tank, I had a little local whisky (surprisingly good) before going to bed. Summing up the whole trip in my mind, Mrauk U has been mysterious and mesmerising. Sittwe was romantic and enchanting. Hsipaw was scenic and eye-opening, Pyin Oo Lwin was relaxing and enjoyable. Yangon had its own charm and magic. It had been a most rewarding trip.